Jan Fuscoe, of the Brick Lane Project, tells the story of Balwinder Singh Rana, an Indian activist who has been fighting racism and structural attempts at division in Britain for decades

As a child, Balwinder Singh Rana used to walk two miles to school and, when his father and two brothers moved to England, he became head of the family, looking after his father’s farm in India. He moved to Britain at the age of 16.

“It was cold and wet,” he says. “No one told us what it was like here, and seeing so many white people was a bit of a shock!’.

He had little English and, on his first trip to a shop, heard a couple call out “Cheerio” as they left. “I thought that must be like we say ‘Sat Shri Akaal’ [a Sikh greeting] or ‘Namaste’, so when I walked in I just said ‘Cheerio’ to a bemused shop owner who replied ‘Hello’.”

A few weeks later, he was racially abused by some Teddy Boys while on his way to the pub with his brother and a couple of friends. He was surprised to hear his brother apologise, before moving them all on quickly.

“There were four of us and three of them, and I said ‘why don’t we fight them?’,” he recalls. “My brother, who had a wife and kid back home, said ‘no, no, it’s not like that here’. That generation accepted everything because they’d invested so much coming here, and didn’t want to get into trouble. But I had no responsibilities and I was quite big for a 16-year-old.”

But he soon discovered for himself ‘how things are done’ in England.

Out in the Cold

The ‘Big Freeze’ in 1963 was one of the coldest winters on record, with temperatures dropping to -20°C.

Unemployment was high and there were few jobs, so Balwinder moved to Slough and managed to find a job at a small plastic mouldings factory. There, he worked alongside two young white boys. But, three weeks later, the son of the factory owner turned up.

“Right from the beginning he was very jealous of my friendship with these boys, and started to make my life difficult,” he says. “He used to call me ‘black boy’. He only did it when the boss wasn’t there, but I told him if he didn’t stop, I’d hit him.” As soon as the boss went out, he did it again. “I hit him, but instead of fighting back, he picked up my bag, threw it out the door, and told me to get out. I stood outside waiting for the old man to return and told him ‘he sacked me’. I thought he’d apologise for his son, but instead he said ‘you’ve got to go’.”

The Youth Employment Agency told Balwinder that, as he had been sacked, there was nothing it could find for him.

“I had to get up very early and walk around all the factories,” he remembers. “Most of them had signs up saying ‘no blacks, no Irish’, but if they didn’t have a sign I might go in only to be told ‘we don’t employ your people’. I said ‘why don’t you put a bloody sign up?”

Eventually, a factory foreman pointed out “a really hard job that a man of around 30 was doing”. In those days, workers under the age of 21 were paid half the wages. Balwinder got the job as the man “realised that he could pay me half as much”.

He started evening classes in Slough and began ‘A’ Levels full-time when he moved back to Gravesend in 1967. A year later, Enoch Powell made his infamous ‘Rivers of Blood’ speech and a wave of racial attacks spread across the country. The ‘Skinheads’ had taken over where the Teddy Boys had left off.

“They used to call us ‘Pakis’ and the mainstream press disgustingly called it ‘Paki-bashing’, as if it was a joke,” Balwinder says. “The dockers in the area supported Enoch Powell, so there were attacks in Gravesend as well. We set up the very first Asian organisation, called the ‘Indian Youth Organisation’, supporting the families of those who were attacked. I went to the Citizens’ Advice Bureau and picked up all the leaflets they had, and the woman behind the counter said ‘you must have a lot of problems’. I said ‘I have’. We learned everything we could from those leaflets.

“A year after we set up, in 1970, a massive cyclone devastated East Pakistan [now Bangladesh, where more than half a million people died]. We went around collecting money because we wanted to bring people together, and we invited the Pakistani and Indian ambassadors to give them the cheque. We raised about £500.”

In 1974, the National Front held a meeting at Conway Hall, with a big protest occurring outside. The anti-racist student Kevin Gately was killed. It was originally thought that he died under a police horse, but an inquest subsequently determined that he was probably killed by injuries sustained from a mounted police truncheon.

“It was the first time we had any contact with the ‘White Left’,” Balwinder recalls. “We were very thankful that they supported us – white people fighting white people to protect brown people. I got in contact with the Socialist Workers Party and then, when the National Front arranged a march in Leicester, they asked me to come and help organise a protest.”

By 1976, Balwinder had moved to Southall. He had a university degree in Computer Science and an IT job in London.

The National Front was regularly selling its racist paper on the corner of east London’s Brick Lane. The police insisted that the site was available to whoever arrived first. 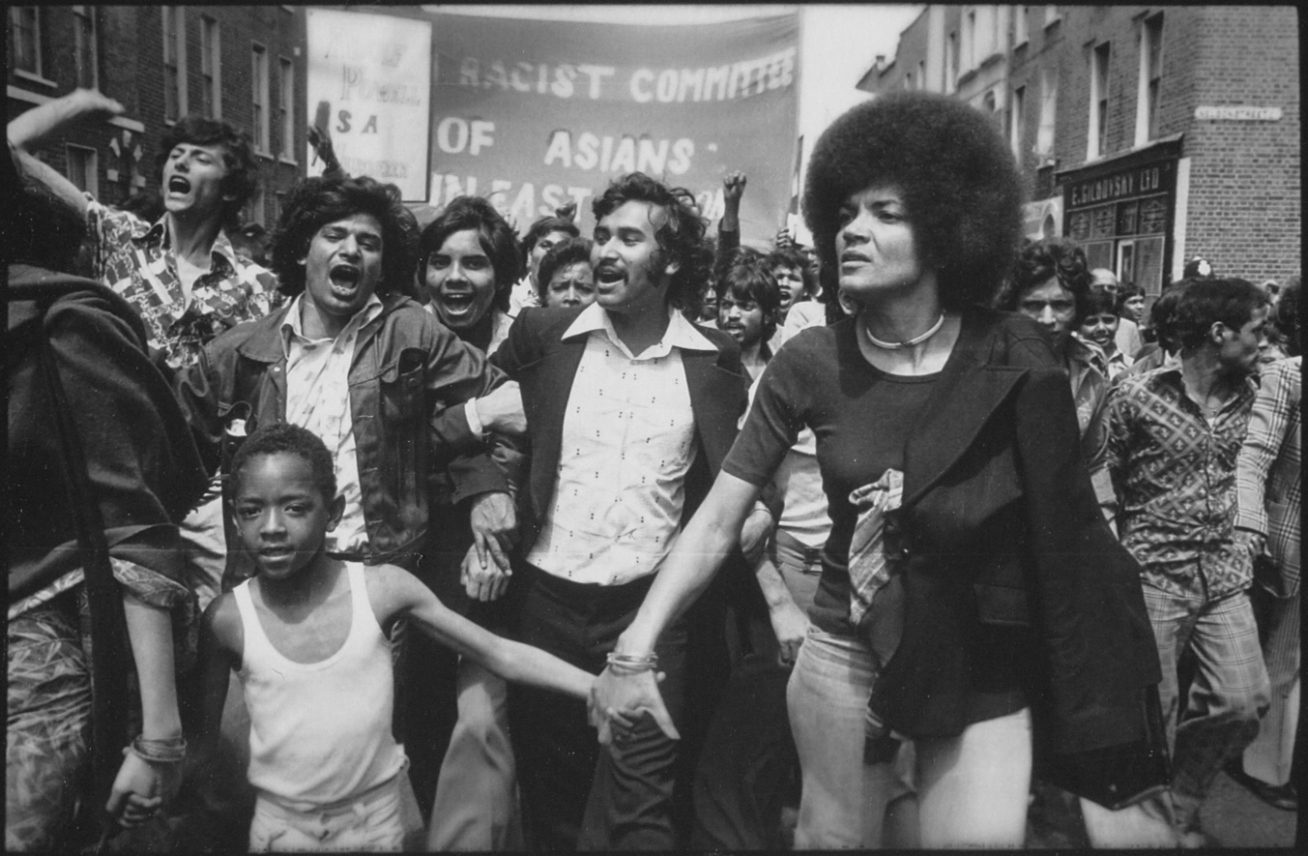 “Many on the white left started organising to push them off the pitch, so we started turning up early Sunday morning, and the National Front started doing the same,” he says. “Eventually we started turning up on the Friday night and spending the whole of Saturday and Saturday night. I met a lot of people then. A lot of Bengalis used to bring us tea in the middle of the night. They used to call me Mr Singh from Southall.”

The Anti-Nazi League was formed in 1977. Balwinder gave up his lucrative job in IT to become its full-time National Asian Organiser, which involved travelling the country to help organise protests against the National Front which was, by then, marching every week.

On 30 April 1978, the biggest anti-fascism demonstration since the 1930s took place, with Balwinder bringing three coaches of people from Southall. More than 100,000 people marched from Trafalgar Square to Victoria Park in Hackney, where the first ‘Rock Against Racism’ concert took place.

Less than a week later, Altab Ali, a Bangladeshi leather garments worker, was murdered as he walked home from work. One of the three white youths responsible claimed that Ali was targeted because he was a “Paki”. Ten days later, Balwinder marched with 7,000 others behind Ali’s coffin to Downing Street in order to present a petition that called on the Government to protect Bengalis from racial discrimination.

Just weeks later, Ishaq Ali was stabbed to death in Hackney. Balwinder proposed that, rather than another march to Hyde Park, the protest should be local to “show the racists that you are not scared of them”. In the end it was both – a huge march around the local area and on to Hyde Park.

Balwinder also helped to set up the Bangladeshi Youth Movement and then the Newham Youth Movement. Following another murder in 1979, there was talk of another march, but this time Balwinder proposed that they take direct action.

We have to unite all the issues together, the blacks and whites, working-class people need to come together. The system wants to divide us, but we must know their game. We need to unite and beat fascism.

Two of the main arteries of London passed through the area – Commercial Street and Whitechapel Road. Balwinder believed that “if you block these arteries you can stop a lot of the import/export in London and then they’ll have to listen to you” – which is exactly what they did. “After that, the authorities started to listen too,” he says.

Balwinder was the chief steward at an anti-racism demonstration in Southall in 1979 where Blair Peach was killed. He highlights how the forensic report found that Peach’s head injuries were likely caused by a policeman’s cosh filled with lead.

“After two years, I went back to my boring IT job,” he says. “I was still active, but not as an organiser.”

When the far-right Islamophobic English Defence League (EDL) began fuelling tensions between the Sikh and Muslim communities – even electing a Sikh ‘spokesperson’ to speak out against Muslims – Balwinder felt compelled to act again.

“I used to go on the anti-EDL marches and, when I saw three of them carrying the Sikh flag, that really made my blood boil and I thought I must do something,” he recalls. “We launched ‘Sikhs Against the EDL’ and eventually we issued the Sikh spokesperson with an ultimatum, giving him three weeks to resign from EDL or we’d excommunicate him.”

Channel 4 tried to organise an interview between him and the spokesperson, but Balwinder refused to take part, saying “I don’t talk to fascists”.

The spokesperson resigned from the EDL two weeks later.

Today, Balwinder says “I’m still an activist”. In spite of so many negative experiences, he has always felt it was important for people to come together and attributes this to his early experiences.

“That was always my aim,” he adds. “We have to unite all the issues together, the blacks and whites, working-class people need to come together. The system wants to divide us, but we must know their game. We need to unite and beat fascism.”

On a recent incident in Islington, in which a police officer held his knee on a black man’s neck, Balwinder observes: “That man was lucky because there were so many people around who were not just bystanders and were prepared to intervene, thus becoming upstanders”. He is currently co-convening the West London Stand Up to Racism group that has been helping to organise Black Lives Matter protests in Ealing, Brentford, Turnham Green and Hillingdon.

“I’m really pleased that Extinction Rebellion is using direct methods of protest,” he adds. “That’s one of the best forms. But I think the trade unions also have a part to play – the real power lies with the working-class. When the workers stop production, that really hurts the pockets of the rich… That will really wake them up.”

Patrick Howse, 6 June 2022
Patrick Howse shares the story of three generations of his family – a tale of loss, discovery, conflict and plural identities