30 years after German reunification, the country’s capital is experiencing a change in its culture and character, Craig Stennett reports

“It’s a revolutionary supplier which we helped relocate three years ago when they were having problems with their landlord.” Pausing, and with a touch of humour, he adds, dryly: “It’s got everything inside you need to start a revolution.”

Forty-six-year-old teacher Markus Kammermei of the local Kreuzberg voluntary housing support group ‘Bizim Kiez’ – a Turkish-German language merge meaning ‘Our Neighbourhood’ – is taking a walking tour of the district he has lived in for the past 14 years. Outlining his group’s mission, he offers this summary: “Our main goal at Bizim Kiez is to foster solidarity, self-empowerment and allow people to resist.”

Enclosed on three sides by the Berlin Wall during the Cold War, Kreuzberg has more recently been home to autonomist, anti-capitalist campaigns and an alternative art and punk scene.

Overlapping groups have infused it with character, history, life and politics. The area is still a largely mixed-heritage working-class district with a strong Turkish migrant community, breathing a flavour of life into its make-up. Now, though, it seems that this is all under threat.

Irreversible change is on its way, but not, as the locals say, “without a fight”.

In Berlin today, an estimated 85% of the city’s residents are renters. In the past decade alone, the average rent for new properties has increased by 100%.

These rent rises have gathered pace in recent years, with 2017 alone seeing an increase of more than 20%. Compared to other global cities such as London, Hong Kong or San Francisco, Berlin may still appear cheap, but that situation will, if unchecked, be only temporary.

At the beginning of the year, in an attempt to respond to the problem, the federal state of Berlin introduced the Rent Cap Act to hold down the spiralling cost of living in the city. In theory, it puts a five-year moratorium on further rent increases pegged to 2019 levels. There are, however, caveats that circumvent the city’s covenant. A landlord can charge a higher rent if they make improvements to the property, for example.

The backstory to Berlin’s predicament can be found in decisions made in the 1990s. The poor but sexy cash-strapped city sold off some two-thirds of its publicly-owned housing stock following German reunification. This was a desperate a bid to cover the city’s ballooning debts, coupled with a political incentive at the time to rapidly introduce shock capitalism to the former socialist East.

A mini property bubble briefly ballooned in Berlin, fuelled by professional real estate, urban renewal companies and venture capitalists, with apartments and businesses snapped up for pennies on the pound. However, this was very much an isolated boom.

Indeed, a sheer lack of cash in Berliner’s pockets blunted the property boom. The city had been hollowed-out economically during Soviet occupation. Small enterprises fled the city, and therefore few firms were able to fuel growth after the fall of the Berlin Wall in 1991.

Roll forward to 2008, and the global financial crash made property seem like a safe bet for speculators who were seeing their stocks and shares tumble. Capital rushed into the city alongside expensive upmarket bars, restaurants and hostels.

A once-divided city was seemingly set to split again – this time along the lines of wealth – as the agents of gentrification and capitalism took advantage of the city’s growth potential. And this division can be seen today in Kreuzberg. 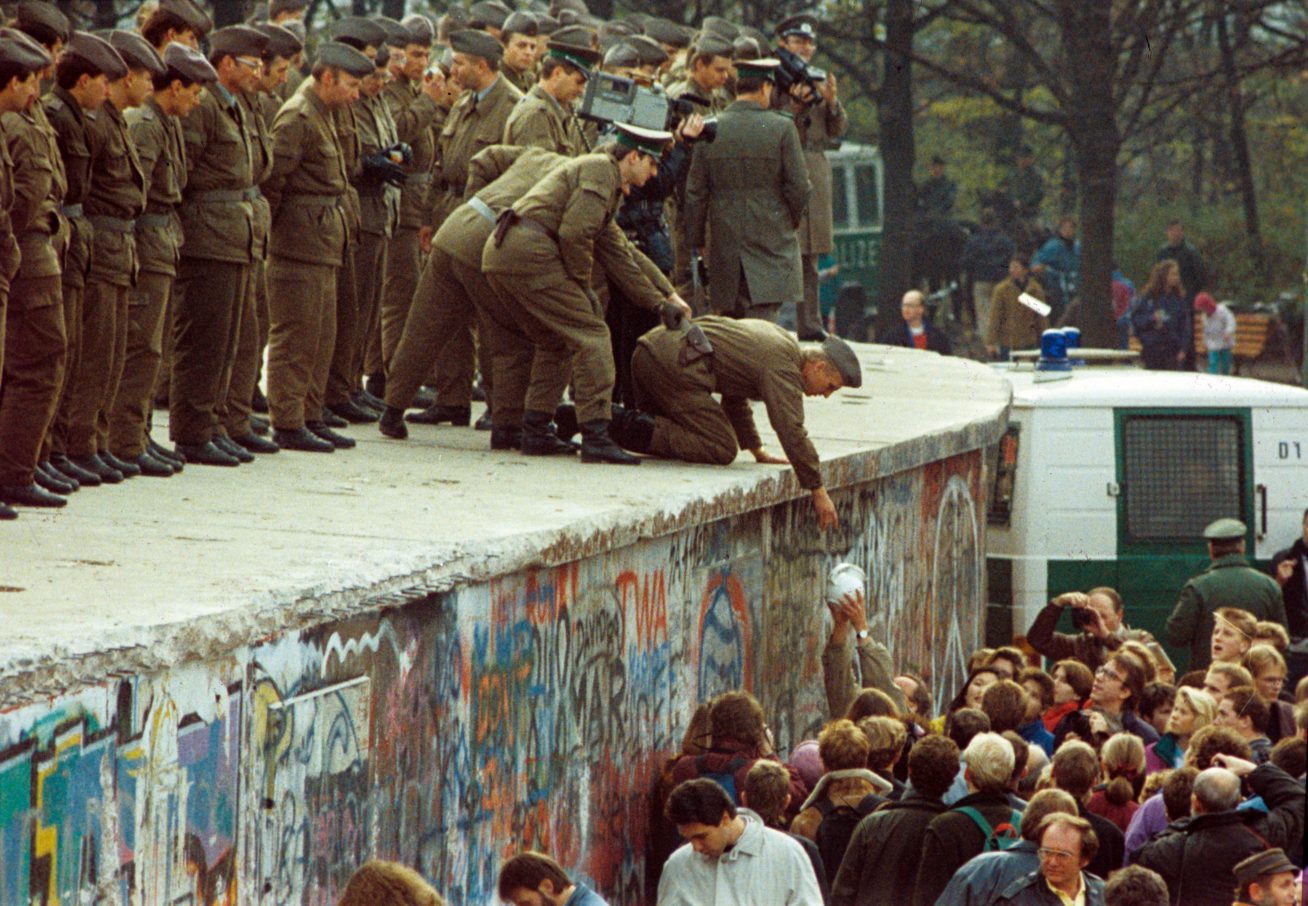 Fifty-two-year-old Ricarda, an ex-seamstress – now semi-retired due to ill health – has been living in Berlin since 1987.

“Over my time here some houses have got nicer,” she told Byline Times. “There’s never a standstill in Berlin. Until 2008, this was a kind of natural gentrification. It was okay and you could understand it. But it really accelerated after 2008. So many small shops have been forced to close. Things you need for your daily life. It’s been replaced with restaurants and bars and tourists. The Berlin that we know is going to be lost forever, unless we get a lot of people onto the streets to stop this.”

In a bid to save her own apartment, Ricarda has been active in the tenants alliance ‘Willi Wollt’s Anders’ at Wrangelstrasse in Kreuzberg. Her residence is situated in the Luisenstadt social preservation area, an initiative which is supposed to maintain the make-up and character of a vicinity.

Lisa John, a fellow resident of Wrangelstrasse, outlines the present situation: “Our house has now been sold to a private investor. We achieved some guarantees with our protests from the new landlord but you learn everything by chance. We only came to know our house was up for sale in the first place because one of us stumbled across it being advertised on the internet. It’s very frustrating that there is no transparency. As a tenant you are the most concerned party, because it’s your home, but you seem to be the last to find out what’s happening.”

The house was purchased by Henrik Ulven, of Heimdal Zweite Immobilien GmbH in Berlin. “What we were hoping for was a Berlin-owned housing association to take our property,” Lisa said. “What’s so worrying about this whole process of gentrification is that it is invisible. There could be 10 more houses in our street being sold right now and no one would know, unless the tenants stand up and make a noise.”

On Falckensteinstrasse in Kreuzberg, opposite ‘No Name Park’, local residents Lorena Jonas and Anna Lafrenz have launched a campaign to protect their apartments. After a three-month period of action by the group, all 23 houses have just been bought by Deutsche Wohnen, one of the big firms in the German property market.

However, their campaign did achieve some guarantees on the continuity of rent and living conditions from the new buyers.

“All of the Kreuzberg houses that were sold are in the protection area Luisenstadt, which is supposed to prevent gentrification,” Lorena explained. “But a new landlord just needs to modernise a property and then the rent can be put up, forcing a lot of the poorer tenants out. At our first meeting, when all the houses came together, we knew we had to go out onto the street and make as much noise as possible. I contacted all the political parties in Berlin for help, except the AfD (Alternative for Germany). I believe our actions secured some concessions.”

The group organised a piece of street theatre called “Wohnopoly” – an adapted version of the board game Monopoly – in front of Berlin’s Town Hall. Local residents played various characters and mimicked the property game of trying to find and secure somewhere to live against the forces of big business and corrupt politicians.

“I played one of the property developers who gets chained up in the end of the performance,” Anna said. “You know you have to mobilise your own community for action as no one else will. We had a meeting with Bizim Kiez who were great with advice and support. We also knocked on doors and put up notices and started an email group to keep everyone informed.”

But it’s not only housing tenants who have cause for concern. “As tenants we have some protection, but the businesses here have none,” Lorena noted. “The critical infrastructure of shops and stores that are essential to our life here have no protection. Once their contracts are up, any new rent can be set. If they can’t pay – they go.”

It’s a warm and pleasant evening on Oranienstrasse in Berlin. The street, which once drew international attention for hosting the May Day pitched battles between the police and protestors in the late 80s – an annual tradition the neighbourhood has kept alive to this day – is experiencing a gentler form of protest tonight.

Supporters are gathering in defence of the bookshop Kisch & Co. Poetry, book readings, music and politics are the activities on the street outside the shop. A literary fixture on Oranienstrasse for more than 23 years, the shop has been without a contract with its new landlord since the end of May.

“Our block was sold at the beginning of this year for €35.5 billion to a real estate fund in Luxembourg and we offered the new owners a rent but they refused,” Thorsten Willenbrock, the joint owner of the bookshop, told Byline Times. “Our only weapon now is publicity to bring attention to the situation.”

The bookstore had already experienced a 15% drop in income prior to the Coronavirus pandemic, due to the changing nature of the neighbourhood. The’touristification’ of Oranienstrasse has left its mark, with a proliferation of bars and restaurants catering to the drinking visitor, supplanting shops for locals.

“It’s a contradiction that people come to Kreuzberg for its spirit, but their presence is destroying it”, said Willenbrock. “Eventually we’ll become like London, where nothing is left of the character that was there before.”

Fifty-one-year-old Philipp Vergin, a personal assistant to a Berlin MP and active within the local community through Bizim Kiez, is in the crowd.

“When I first moved to Wrangelkiez in Kreuzberg it had a really large Turkish community, and people on lower incomes or unemployed,” he said. “Their houses have been sold and sold again, and each time their rents go up. Small shops, groceries, banks, and drug stores have disappeared to be replaced by bars.”

As for the objectives of the fair rent movement, “you have to see the small successes and victories to keep you motivated and keep the struggle going,” Philipp said. “There are global players with money buying up Berlin, but we want that everyone who wants to stay in Kreuzberg, business or tenant, can stay here. That’s our aim.”

A crowd of several hundred has gathered to offer support to the bookshop and have occupied the now closed street, enjoying the upbeat ambience of the protest. The neighbourhood-wide support network is evident, as Ricarda addresses the crowd.

When asked if all this resistance will make a difference, she answers with the historic quote: “Who fights can lose, who doesn’t has already lost.”

The residents of Kreuzberg intend to fight.