As Freddie Flintoff speaks publicly about having bulimia, Nathan O’Hagan explains how lockdown has made him finally confront his own condition

I was about eight years old the first time I can recall making myself sick after a meal. I’m now 42 and still doing it regularly.

That’s something I haven’t previously shared in any public way beyond a few members of my immediate family and a couple of mental health professionals. The fact that it has taken me this long to talk about being bulimic is indicative of the stigma that still attaches itself to eating disorders, especially among men.

These are illnesses that have always been viewed as affecting young women and girls, but the charity Beat estimates that approximately 300,000 men are affected by them. This has increased significantly in recent years.

While it is far from the only reason for the increase, growing pressure on men and boys to look a certain way is clearly a factor. They are bombarded with images of unobtainable, perfect bodies in the same way that women and girls have been for decades.

I had a controlled diet that made Christian Bale in The Machinist look gluttonous.

The shame of suffering from something societally viewed as affecting women makes men even less likely to seek help than they would for other mental health conditions, often perpetuating the illness and leading to or exacerbating drug and alcohol misuse. These are both things I’ve had an issue with but, while I haven’t used drugs for many years and I now like to think I have my drinking under control, my eating disorder is something that I continue to struggle with.

Just as with any form of mental illness, the reasons for someone having an eating disorder are complex and varied, regardless of gender or background. The minutiae of the causes are probably best left to an individual to work through with a trained specialist, rather than for me to pick through. My experiences of what led me to bulimia may be in no way relevant to the next person.

What I feel is most important is that we get to a point where men feel able to acknowledge that they have an eating disorder and for society to accept that this is a very real problem. Other mental health conditions may lead to self-harm, but the very nature of anorexia and bulimia in themselves can kill.

I was roughly the same age my youngest son is now when I first felt the need to vomit.

When I think about it in those terms, it is a horrifying thought: that a child that young can already be so troubled that they feel the need to do something like that. But clinical diagnoses of anorexia and bulimia in children is now far from uncommon and it is for the sake of my children and wife that I first began to take steps to deal with my condition about 12 years ago.

Despite years of specialist counselling at a local eating disorders support service, as well as ongoing therapy, I still haven’t made enough progress that writing this doesn’t feel necessary.

The average age at which bulimia starts to affect males is thought to be about 18. I was ahead of that by a decade, but it was only the beginning. As I approached adolescence, unsurprisingly, the regularity increased, as did other means of weight control, such as excessive exercising and reducing my intake of food. 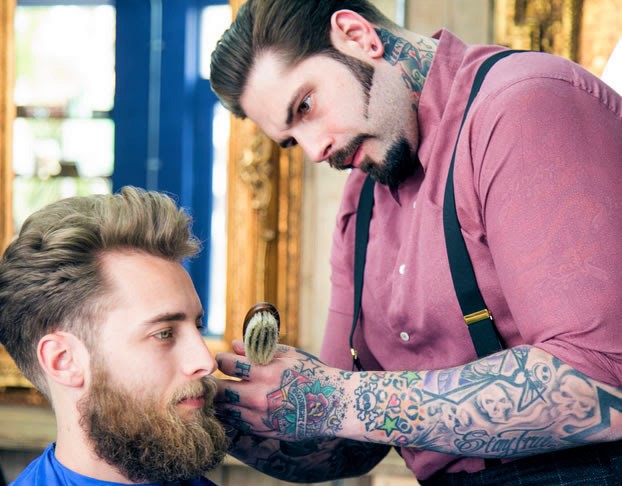 ‘Men Need Spacesto Talk About Masculinity.Cutting Hair Can Save Lives’

When I left school and went to college, I began smoking more as a way to suppress my appetite. Despite the growing eating disorder, I had, up until then, been naturally fairly stocky, broad shouldered and with a natural muscularity which was emphasised by my excessive exercise. It was at this point that I began to lose a significant amount of weight, but things got significantly worse when I first moved away from home to study at the age of 18.

Now left completely to my own devices, and not needing to hide my habits from anyone, I would often go days at a time barely eating a thing and frequently bringing back up what I did eat. Homesick, and failing to truly settle into my new surroundings in halls of residence, I relied on the vomiting to give me some feeling of security and control, along with drinking far more heavily.

By the time I moved into a shared house in the second year, I had a controlled diet that made Christian Bale in The Machinist look gluttonous. I’d often start the day with a single apple, a cup of tea, and several cigarettes. Many days, the only thing I’d consume after that was alcohol.

Some nights, on the way home, I’d buy myself a tonne of junk food and devour it all before purging and starting the whole process all over again the next day. That year, anorexia, bulimia and binge-eating disorder all overlapped for me.

Inevitably, my weight continued to drop, usually hovering around the eight stone mark, but frequently dropping as low as seven-and-a-half stone.

Surrounded mostly by young people, all busy enjoying student life or dealing with their own issues, few people ever really questioned how skinny I was and, when they did, it was surprisingly easy to explain it away. Initially, I just dismissed it as being part of an overall ‘look’. I was a spiky-haired punk and people seemed to readily accept the thinness as part of the whole aesthetic.

The shame of suffering from something societally viewed as affecting women makes men even less likely to seek help.

When I was a bit older, I became vegan, long before it was easy to buy vegan food in most shops and restaurants, so it was easy to be able to eat very little without people really finding it odd. The stereotype of the rake-thin, malnourished vegan also came in handy at this point.

About 20 years in at this point, I had come to accept that having an eating disorder was part of my life, as integral and inevitable as any other character quirk. While I hadn’t beaten it, it was compartmentalised to a point where I had come to terms with it; I wasn’t sick after every meal or even every day. Sometimes I’d go days and, on rare occasions, even weeks without doing so.

This has continued to be the pattern for me ever since. Several months of lockdown, however, changed that.

The increased stress and being unable to play football twice a week – which had become crucial in offsetting the urge to make myself sick – led to a significant rise in me doing so. I was therefore thinking a lot about my condition and my wife, having noticed the behaviour patterns that she is now familiar with, spoke to me about it.

It’s now time for me to begin addressing it more seriously and writing this feels like a part of that. But I’m under no illusions that that is all it will take. I’ve had an eating disorder for the vast majority of my life. It is probably the most consistent thing about me, to the point where it’s impossible for me to imagine ever being completely rid of it.

More broadly, though, maybe things are finally beginning to change.

Former Accrington Town striker Billy Kee, who retired from the game in January after struggles with mental illness, recently gave an interview to the BBC in which he spoke about suffering from bulimia. Last night, the BBC broadcast a documentary in which former cricketer Freddie Flintoff opened up about his own eating disorder.

For two professional sportsmen to speak publicly about a condition like this in the space of a week feels like significant progress and perhaps it is the breakthrough we need to start talking about eating disorders in general and male eating disorders in particular.

I hope that, by writing this, I can play my own small part in that.