Sparked by an extradition bill – allowing activists to be deported to China and trialled on the mainland – protesters resisted on the streets. At times, the demonstrations mirrored urban warfare. Tear gas, Molotov cocktails and hordes of riot police swept the city.

As 2019 ran its course, Hong Kong’s mass pro-democracy rallies were slowly petering out. Then came the Coronavirus pandemic, followed by the National Security Law implemented by Beijing – widening the scope for police forces to arrest protestors – both sucker-punching the numbers of campaigners on the streets.

But while last year’s tumultuous scenes are unlikely to repeat anytime soon, the movement is still active and the protests are changing with it.

There are fewer people wearing the yellow helmets and black-clad attire that have become a feature of Hong Kong street protests – likely ditched to help evade arrest. Furthermore, the actual numbers of hardliners today has depleted dramatically. Some are under police investigation and fear further retribution, whilst others have fled Hong Kong altogether.

“A lot of people have left, or are leaving, a lot more sidestepped the movement,” Lai told Byline Times.

“Definitely, we will become a much smaller group, and hopefully, this group will stand firm and become the backbone.”

Under the ‘one country, two systems’ agreement signed by the UK and Hong Kong in 1997, after the city was transferred back to Chinese rule, it was promised that Hong Kong would retain a ‘high degree of autonomy’ until 2047.

The National Security Law prohibits secession, subversion, terrorism and collusion with foreign forces, and its meaning can be widely interpreted. Even non-Hong Kong residents who violate the law, in the city or overseas, can be prosecuted.

It is therefore widely believed that China has violated the 1997 agreement and effectively scrapped the ‘one country, two systems’ principle.

The new law is limiting the methods of demonstrators, too. Protesters cannot wield revolutionary slogans while criticism of Beijing is deemed to be subversion. 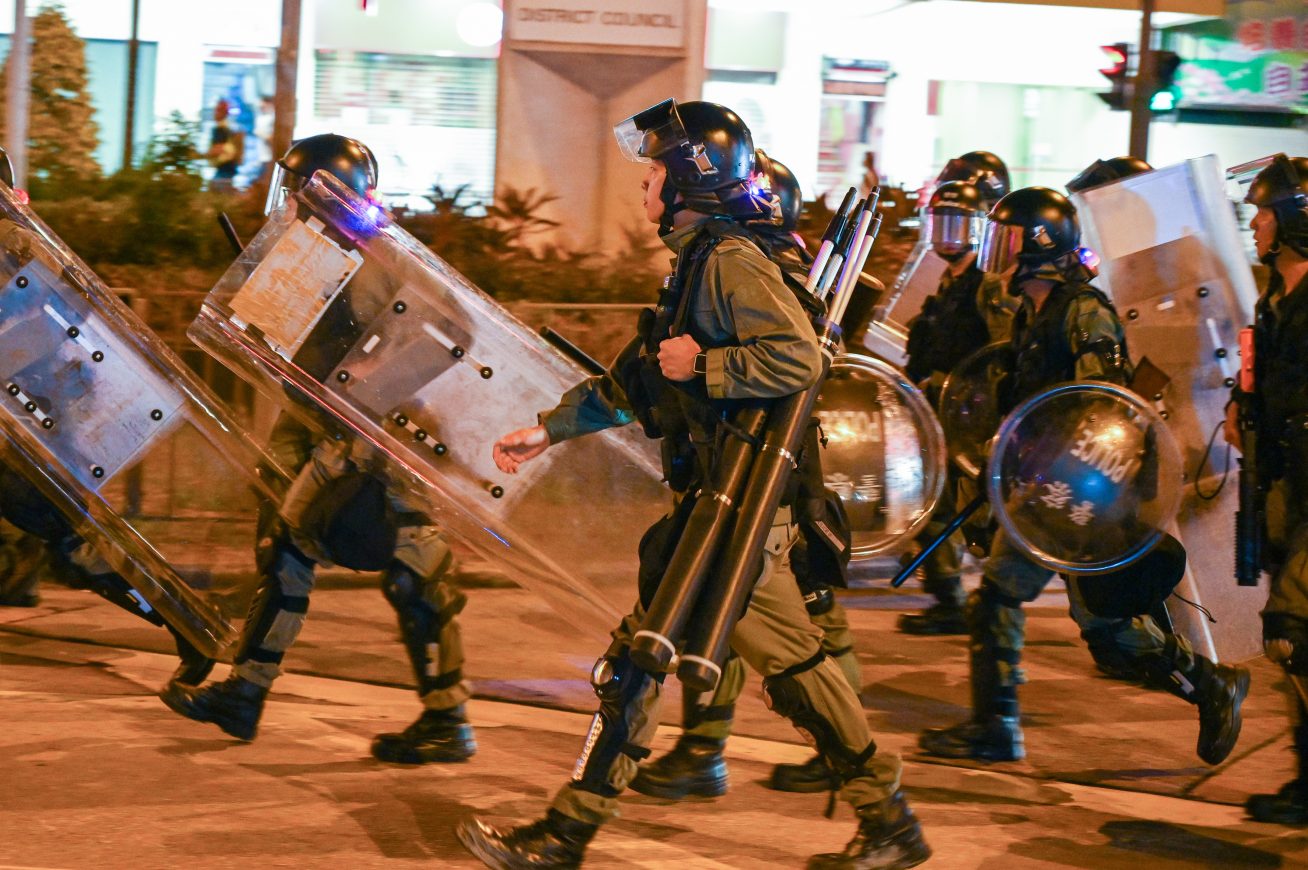 Last year, Hong Kong’s main public transport network, the Mass Transit Railway (MTR), was criticised for collusion with the police. Demonstrators then continually vandalised MTR stations to garner attention. Under the National Security Law, however, these actions would now be regarded as terrorism.

Today, protestors tend to stay away from confronting police officers, keeping their distance while mixing within a sea of press and volunteers. This is a sharp contrast to the black-clad demonstrators who manned the frontline during last year’s clashes.

One subtle way of supporting the resistance has been the decision taken by thousands of people to shop at venues that are deemed ‘yellow’ – businesses that are sympathetic towards the pro-democracy cause.

Meanwhile, with political sloganeering a dangerous act, some street protestors have held up blank posters as a symbol of their censorship, while office workers have protested during their lunch hour by publicly reading the pro-democracy newspaper Apple Daily.

After owner Jimmy Lai was arrested in August over foreign collusion charges, the stocks of the media outlet also skyrocketed, widely seen as a sign of protest.

This has occurred despite the regular ‘stop and search’ routine undertaken by the Hong Kong police, and attempts to punish protestors under Coronavirus restrictions.

“We are angry that the Hong Kong Government is showing their loyalty to Beijing by prosecuting us. We insist we have the right to mourn; we have been doing this for 30 years.

“The Hong Kong Alliance will continue our efforts and will not back down.”

The Hong Kong Police Force insists its actions are to prevent COVID-19 transmission.

And while officers have been accused of using excessive force against protestors in the past, scenes of smoky, tear gassed streets have been much less frequent this year.

Instead, police have taken a different approach, using strength in numbers in an attempt to nullify escalating demonstrations.

According to a police constable who gave his name as Peter, the working hours for the force have increased.

“To cope with the protests, the working hours of frontline staff may be 12 hours or more,” he told Byline Times. “They only have a few hours rest before they need to come back to their next duty.”

Since the clashes began, one question has been asked repeatedly: what will happen to those who have been arrested?

The sheer scale of those arrested during the changing protests is sometimes difficult to comprehend. In June, the South China Morning Post attempted to do just that, publishing an image depicting the 8,981 people who had been arrested over a 12-month period.

With judicial laws in mainland China different from those in Hong Kong, there is a fear that those arrested will eventually face trial under the rule of the authoritarian Chinese Communist Party (CCP).

Although protestors don’t appear to have suffered this fate yet, the National Security and extradition laws mean that deportation and trial in mainland China is possible.

A recent incident shows how things differ over the border. In August, mainland Chinese coastguards caught 12 Hong Kong dissidents who attempted to flee to Taiwan by boat. They have since been detained, with little update on their situation.

The historic protests of last year sparked a new era within Hong Kong. The fight to preserve the city’s unique identity has evolved. And yet, despite some onlookers claiming the protests are over, activists know their resistance and ever-changing movement will continue.