While the UN continues to highlight the urgent need to tackle climate change, the British Government continues to vilify activists argues Stuart Spray

Climate activists from Extinction Rebellion (XR) have returned to the streets of the London, Manchester, Cardiff and Liverpool over the past ten days, to once again demand that the Government declares a climate and ecological emergency.

In a widely reported standoff with police last weekend, the climate change activists successfully blocked roads leading to two printworks at Broxbourne, Hertfordshire, and Knowsley, near Liverpool. The sites were owned by Rupert Murdoch’s News Corp and home to The Sun and The Times, Daily Mail and Daily Telegraph. XR said it took the action to “expose the failure of these corporations to accurately report on the climate & ecological emergency, and their consistent manipulation of the truth to suit their own personal and political agendas”.

Extinction Rebellion ‘seeks to undermine and cause damage to our society’

In September 2019 CJ Werleman  accused Rupert Murdoch-owned media outlets in Byline Times of being right-wing propaganda of which incessantly spewed out fossil fuel industry-generated disinformation and talking points. He argued that it was “time to ban climate change denialism in the media”.

In September 2017, BBC told its staff they no longer need to invite climate-change sceptics after the media watchdog Ofcom found them in breach of broadcasting standards over a radio interview with the founder and chairman of the climate science denial group the Global Warming Policy Foundation, Nigel Lawson. Ofcom ruled his statements about the science of climate change were not sufficiently challenged.

The Daily Mail published a response by Lawson: ‘Free speech, fake science – and why we must take the fight to the climate zealots’ which took a swipe at the BBC’s prominent presenter, Sir David Attenborough, berated the BBC for not allowing airtime to those who denied the science of climate change and branded XR activists as middle class, hysterical and quasi-religious.

However, a new report, published yesterday by the World Meteorological Organization (WMO) – the UN’s voice on weather, climate and water – warns we have just had the warmest decade on record. This calls on governments to do more to meet the goals of the Paris Agreements has been reported in both The Daily Mail and The Sun with little evidence of bias.

In an interview on the evening before the report was released on Noticias Telemundo, the American Spanish-language television network owned by NBCUniversal, UN Secretary-General António Guterres maintained that the “climate emergency is the central question facing the world” and told senior correspondent Vanessa Hauc “we are on track for a temperature rise of 3 degrees centigrade by the end of this century, which would be an utter catastrophe” and that “we need much more ambition towards reducing emissions.”

In a second interview with Al Roker of NBC News Guterres said that although COVID-19 had caused much suffering and had “a devastating impact on economies and societies”, it was “an opportunity to rebuild a more sustainable economy and society.“

“Our best hope is the generation that’s coming up, and that understood already, and we see that in so many ways around the world, understood already that either we are united or we’ll be doomed,” said Guterres. 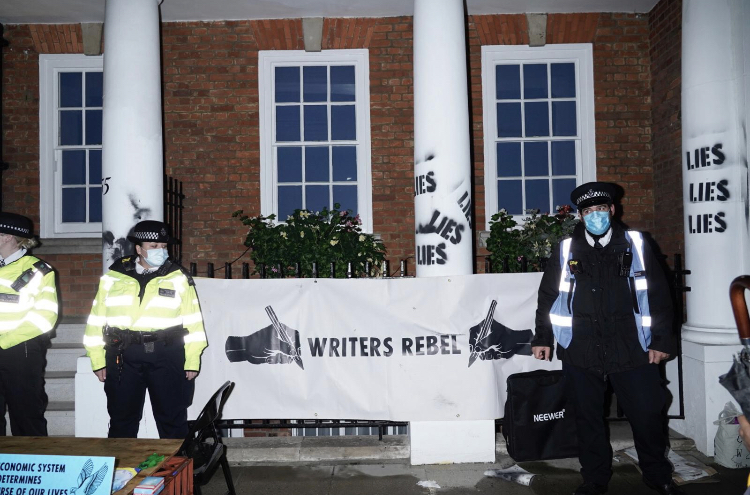 In contrast to Guterres, UK Government has chosen vilify the “eco-warriors” and threatened to classify XR as “a criminal group”. Writing on the current wave of XR protests in the Daily Mail on Sunday September 6, Priti Patel claimed “We must defend ourselves against this attack on capitalism, our way of life and ultimately our freedoms.”

XR has hit back by pointing out that “the thousands of people who take part its non-violent protests” are from all walks of like including doctors, nurses, ex-police, grandparents and other ordinary members of the public. XRs actions have been supported by several high profile political commentators including Baroness Jenny Jones, Nick Aldworth (Former Counter-Terrorism National Coordinator), Diane Abbott MP, Zarah Sultana MP, Bell Ribeiro-Addy MP and Guardian columnist Owen Jones.

The Committee on Climate Change (CCC) – the independent, statutory body established to advise the Government on building a low-carbon economy and preparing for climate change – prepared a Reducing UK emissions Progress Report to Parliament in June of this year. Data showed that despite COVID-19 lockdown, the UK was not on track to fulfil its commitment to becoming net-zero carbon emotions by 2050.

The clear message from the CCC and WMO is that governments must seize the opportunity to make the COVID-19 recovery a defining moment in tackling the climate crisis.