The Cladding TrapThousands Fearful in the Shadow of Grenfell

Three years on from the entirely preventable Grenfell tragedy that caused the deaths of 72 people after the 24 storey building was engulfed in flames because of combustible cladding that no longer passes updated safety guidelines, thousands of homeowners are still living in fear, and are trapped in dangerous unsellable properties.

It is clear that there have been huge failings from both developers and government, and yet it is innocent leaseholders who are being held to account. The Government has said works must be carried out to make such buildings safe, but until they are, the uncertainty and anxiety faced by leaseholders is set to continue – and it is causing nothing short of a mental health crisis.

The pace of such remedial works across the UK has been extremely slow, meaning thousands have been left to pay for mandatory ‘interim measures’ such as 24-hour fire-watch patrols, at a cost of thousands of pounds a month, for several years.

The UK Cladding Action Group (UKCAG) was born out of a collective frustration at the Government’s inaction, despite the rhetoric. One of its founders, Ritu Saha, lives in one of the affected buildings in Bromley and is attempting to unite leaseholders across the country to force the Government to take action.

Saha explained the situation of thousands of people living in properties bought in good faith, for many the first step on the property ladder, that is surrounded by dangerous and flammable cladding rendering the properties unsellable, uninsurable, and valued at ‘zero’ until multi-million-pound remediation works are carried out.

In addition, this unbearable situation has left many experiencing severe anxiety, suicidal feelings and faced with the prospect of declaring bankruptcy or continuing to live in a building that is a fire risk.

The mental health implications of this are significant. Research by UKCAG found that nine out of ten leaseholders said their mental health had deteriorated as a direct result of the situation in their building. A third of the 550 people surveyed across the UK were aged between 25 and 35, 68 per cent were first time buyers, and 23 per cent reported having suicidal feelings or a desire to self-harm. Restrictive eating, alcohol, drugs and smoking were all cited as coping strategies.

Saha said: “I can see the cladding everytime I look out of my window, I can’t get away from it, and obviously with Covid we have been stuck inside. The worry affects every part of your life, and your relationships with friends and family. Sometimes I think it would be so much easier just to jump from the building and end it all.”

The 44-year-old university administrator explained that part of the problem is that developers will often sell the property on when built to ground rent investors, who claim the responsibility to remove the cladding is not theirs, in addition to equally reluctant management companies. Where developers are still trading, recourse for leaseholders to force companies to take responsibility for replacing the dangerous cladding can be time consuming and expensive.

Since Grenfell, regulations for buildings above 18-metres have been changed and owners of high-rise properties are now being asked by lenders to produce a special fire safety certificate. 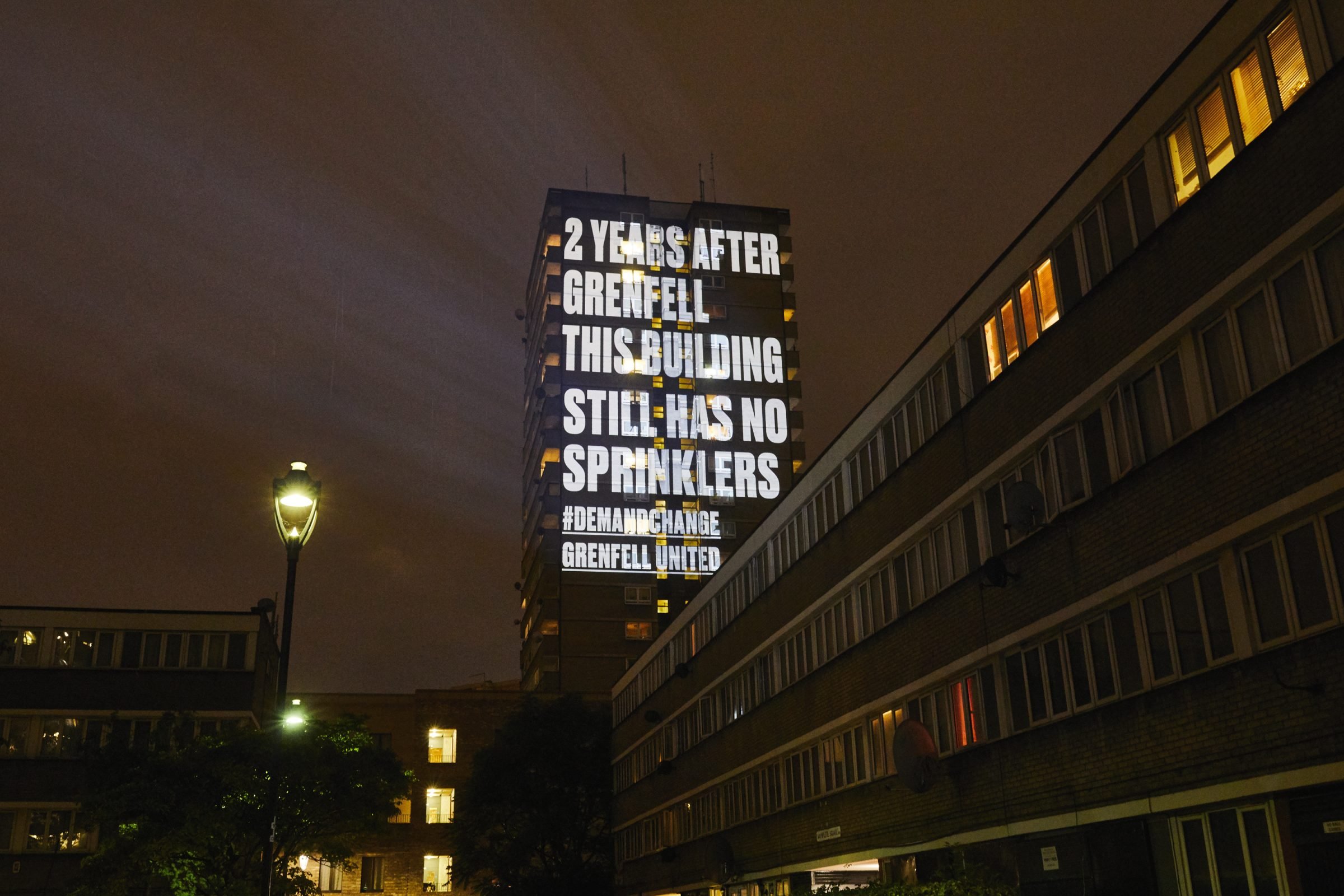 However, the new safety certificates called EWS1 forms are notoriously difficult to obtain because only a few hundred surveyors in the country are qualified to carry out the inspections. It could take years to get to a stage of remediation depending on the approach being taken by your housing association, meaning there is no uniformity to how this problem is being addressed.

Lucy Ireland lives in a 213-apartment block in the centre of Manchester that is just above 18 meters. Despite paying a service charge of £1000 per annum, and ground rent at £200, the 29-year-old also finds herself trapped as the developer, property management company, and ground rent investor all squabble over responsibility.

In addition to her own concerns, Ireland is around eight months pregnant and said she often thinks about whether she could make it to the ground food with a newborn baby, or if she could survive jumping from her window. “I think about it all the time,” she added.

Founder of the National Leasehold Campaign, Katie Kendrick, described leasehold as a feudal and outdated system. “The current cladding crisis is a clear illustration of just how unfair and unbalanced the system actually is. It is a system stacked against leaseholders which leaves them at the mercy of their freeholders, whether that’s a Housing Association or an institutional investor. Leaseholders are utterly powerless and have no control of what’s happening yet are expected to pay for it all. It is a basic human right to be safe in your home.”

Kendrick said that empty words from the government are not enough, and it should  legislate to ban leasehold houses and set future ground rents at zero, which was promised in 2017.

“In the meantime more innocent people are entering a system which many professionals have stated is not fit for purpose,” she explained.

The Ministry of Housing, Communities and Local Government (MHCLG) claims its Building Safety fund will enable faster remediation of buildings while protecting leaseholders from unaffordable costs to replace unsafe cladding, and that building owners should meet the costs without passing them on to leaseholders wherever possible.

The MHCLG said the draft Building Safety Bill includes powers to limit unaffordable or unreasonable building safety costs. Most costs will be subject to consultation with leaseholders and they will also have the ability to challenge costs via a tribunal.

An MHCLG spokesperson added: “We are determined that residents will be and will feel safer in their homes. We are providing £1.6bn to speed up the removal of unsafe cladding and protect leaseholders from significant remediation costs.”

“Remediation can be complex and will vary from building to building. We continue to see good progress overall, with more than 70 percent of buildings with ACM cladding now having completed or in the process of remediation – rising to above 90 percent in the social housing sector. People and their homes are being made safer.

“But it is unacceptable that some private sector building owners have yet to put remediation plans in place and we continue to actively pursue them and encourage swift action. Building owners have a responsibility to make sure their buildings, and the residents living in them, are safe.”