The stars and stripes became a symbol of hope and defiance for the city’s residents who believed that US President Donald Trump’s sympathy for their cause would help them to eventually achieve some degree of autonomy from Beijing.

But when protests erupted across US cities following the killing of George Floyd, it soon became American civilians who were facing the brutal police tactics which their Government had condemned abroad.

In a barrage of tweets, President Trump adopted the same language that China had used about Hong Kong, claiming that “organised groups” were behind the violence. He called the protestors “domestic terrorists”, blamed the media for encouraging them and called for the military to be deployed. 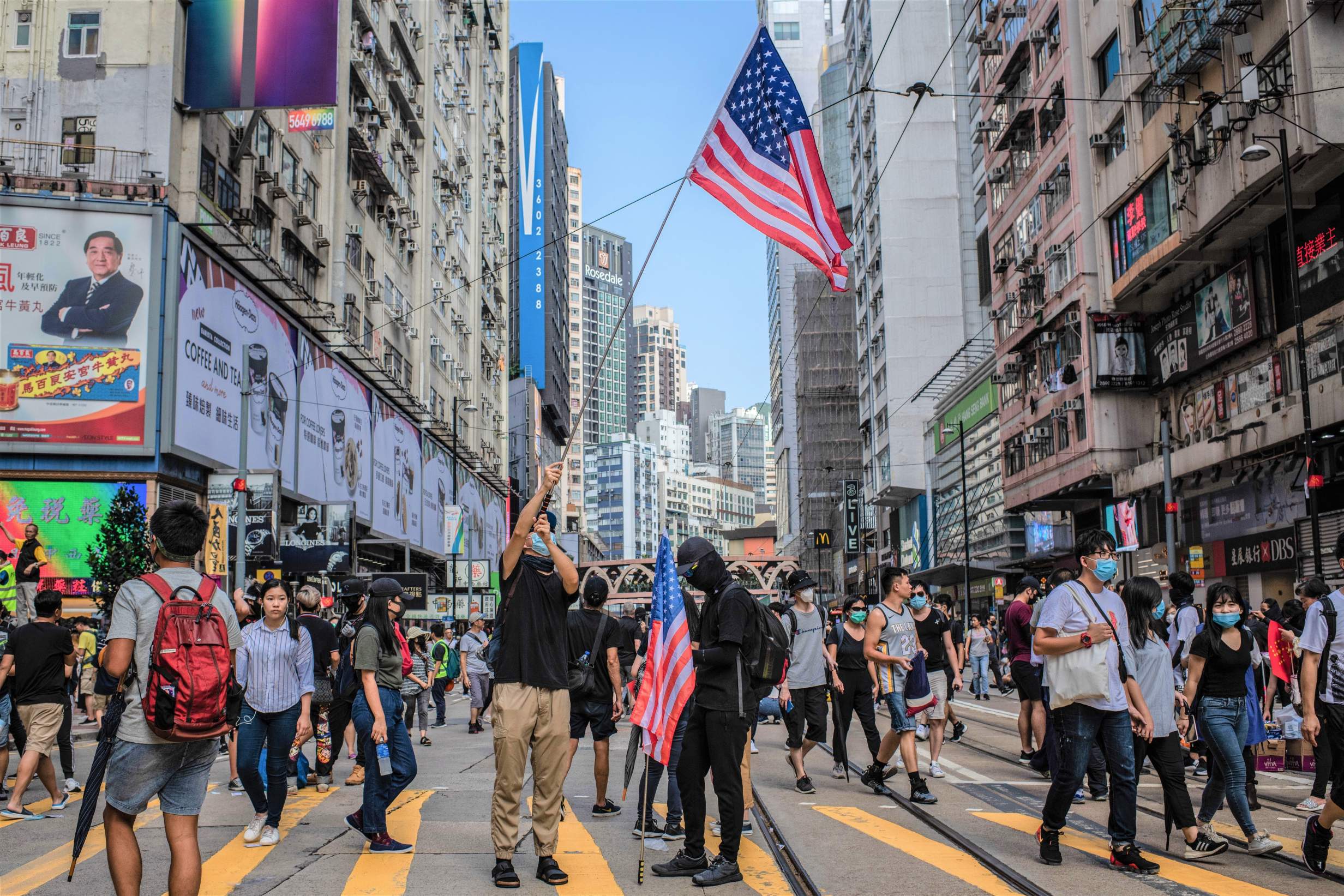 His response, along with the violence on behalf of law enforcement, handed China the foundations of a new propaganda campaign aimed squarely at highlighting US hypocrisy to justify its own crackdowns on free speech.

Hu Xijin, editor of the state-controlled Chinese tabloid the Global Times, took to social media to question “should Beijing support protests in the US, like you glorified rioters in Hong Kong?”. And on the 31st anniversary of the Tiananmen Square massacre, in which Chinese troops killed as many as 10,000 protestors on June 4 1989, Hu said that the US was “commemorating” the day by dispatching the military “and police are opening fire”. America, he said, “is proving the importance for China to restore order in 1989”.

Hua Chunying, a spokeswoman for China’s Foreign Ministry, also demonstrated how effortless this new propaganda campaign would be. Responding to a message of support for Hong Kong from the US State Department, she simply tweeted: “I can’t breathe” – words that have become synonymous with the death of George Floyd as they were among his last.

The timing could not be worse for Hong Kong’s protest movement. As a result, Beijing will show even less concern for criticism of its crackdowns in the city and will likely use events in America to help justify the need for a proposed national security law, which many fear will end free speech, criminalise protests and bring about the “end of Hong Kong”.

It will be difficult for the protestors themselves not to feel let down by the US Government and some degree of solidarity with the Black Lives Matter demonstrators who have been pictured choking on tear gas and bleeding from rubber bullets.

China is not the only American adversary to delight in the unrest.

Despite reports of security forces in Iran killing as many as 1,500 demonstrators last year, law-makers in Tehran have attempted to adopt a moral high ground over the US, claiming to show “solidarity” with the “oppressed” people. The country’s supreme leader Ayatollah Ali Khamenei wrote on Twitter that “the people of the United States have every right to feel embarrassed and ashamed by their govts”.

In Russia, a country known for curtailing free speech and stopping peaceful protests, the foreign ministry said that American police have committed “high-profile crimes all too often”, adding that “this incident is far from the first in a series of lawless conduct and unjustified violence from US law enforcement”.

Kate Allen, Amnesty International UK’s director, told Byline Times that the US’ poor handling of the protests has “played into the hands of authoritarian governments” around the world.

“The authorities in Beijing, Tehran, Damascus and numerous other places will see the USA’s overreaction as grist to their mill. If ever there was a time for policing with restraint and political discourse conducted with thoughtfulness and respect, this is it. Instead, we’ve seen paramilitary policing and provocative political theatre from Donald Trump.

“No country can claim ‘moral authority’ when it comes to commenting on how protests have been policed in places like Hong Kong, but every fresh incident of US police violence is certainly undermining what respect there is for minimum international standards of policing. The right to non-violent protest is a cornerstone of any proper rights-respecting society, and we need to ensure that it’s always enabled wherever reasonably possible.”

President Trump has said little about the heavy-handed tactics used by police forces across the country but, during a US talk show, National Security Advisor Robert C O’Brien claimed that the difference between America and authoritarian countries is that “when something like this happens, we investigate it”.

Days later, a joint letter calling for a special session of the UN Human Rights Council was sent to its 47 member states, calling for an immediate investigation into “police violence and repression of protests”.

A joint statement from the monitors for freedom of expression for the UN and the Inter-American Commission for Human Rights, said: “We are deeply concerned that the militarisation of policing in the United States not only interferes with the right to peacefully assemble but also limits the ability of the press to cover protests. It encourages law enforcement to see protestors and journalists as belligerents, and we strongly encourage demilitarisation and a reliance on international standards for the management of protests.”

They added: “We repeat our previously raised serious concerns that statements by the President of the United States, especially his years-long attack on the media as an ‘enemy of the people’, contribute to an environment of hostility and intolerance.”

Meanwhile, in the UK, Prime Minister Boris Johnson told ministers that “yes, black lives matter” but “whatever people may say about it, whatever those on the left may say about it, the US is a bastion of peace and freedom and has been for most of my lifetime”.