Since joining the EU British food has gone from bog-awful to top-notch, but Otto English reveals how a US trade deal will unravel 40 years of progress

Unless you were there, it’s almost impossible to grasp quite how shit British food was just 40 years ago. Back in the 70s, the British were decidedly and determinedly unsophisticated.

The comparison with our continental neighbours was stark. I remember going on a trip to France as a child in the very early 80s and being presented with a weird green fruit called an ‘avocado’. What the hell was this strange item and why would anyone eat such a thing? Couldn’t they afford frozen Findus pancakes?

Well into the 1980s, most British people ate crap. Heinz sold coleslaw in tins. Anything that wasn’t bland was off the menu; the majority of people didn’t know how to cook or have the inclination to learn. The British had olive oil, but they kept it in the medicine cabinet in case their ears got waxy. Vegetables were boiled longer than the roast was cindered. Smash, an artificial potato powder was a wonder food. If you fancied dessert, Mum might whip up some ‘Angel Delight’ which was neither angelic nor delightful. Meals that actually tasted of anything were viewed as the work of Satan. Many common products, nowadays taken for granted, just weren’t available. Nobody knew what hummus was until the late 1980s when Waitrose started selling it.

Families rarely ate out and, if they did, it was at restaurant chains like the Berni Inn or Golden Egg which are fondly remembered now but only because we have thankfully forgotten how awful the cardboardy food was.

Getting the British mindset to change was an uphill struggle. As late as 1990, Tesco was employing Dudley Moore, in a series of mildly racist adverts, to introduce British audiences to the wonders of ‘Italian food’ including something utterly otherworldly called a ‘tiramisu’.

What a difference three decades make.

A Nation of Connoisseurs

Since the 1990s, Britain has undergone a culinary revolution. The quality, variety and range of produce available to most British people today is better than at any time in history.

Gastropubs dot the land. You can eat great and affordable meals out almost anywhere. Chefs have become celebrities. Bakery and cookery shows dominate the schedules. The British drink more wine and of greater variety than any of our European neighbours. We have become a nation of foodies and connoisseurs.

And it’s all unbelievably affordable. Today, the average family spends around 10.6% of the family budget on food and drink, whereas in the 1960s it was 33%. The UK has come to enjoy some of the cheapest food in Europe. Our supermarket shelves are more plentiful than at any time and the quality and variety on offer is second to none.

In all of this, our membership of the EU played no small part. 30% of our food comes from our former partners and an additional 11% arrives thanks to EU negotiated free trade agreements. While we are relatively self-sufficient in carrots and sprouts, we import a large proportion of practically everything else. 98% of the nation’s oven chips, for example, come from the European Union.

The US Centre for Disease Control and Prevention estimates that one in six American citizens suffers a food-borne illness annually. In the UK, the figure is one in 132.

As a member of the EU, the UK also benefitted from the highest standards of food hygiene and production anywhere in the world. For, when not plotting to subvert the colour of Nigel Farage’s passport, those mandarins in Brussels were quietly enacting a revolution in the quality of even our most basic produce.

Take poultry. The average Briton eats an awful lot of chicken, consuming 35kg a year or two portions a week or an entire large broiler every month. 900 million chickens are bred and slaughtered here every year and a further 400 million are imported from the EU. Chicken farming is big business and worth £5 billion to the UK economy. That makes it five times bigger than the entire fishing sector and it employs three times as many people.

So why was nobody talking about this during the EU Referendum?

Because poultry isn’t sexy. It doesn’t tap into those Ladybird libertarian notions of man pitted against haddock that so enamour Farage and his chums.

Poultry farming is brutal. It has to be in order to provide the quantity of meat the public crave at wafer thin margins and yet the standards imposed on the industry are second to none.

It wasn’t always this way. Back in 1997, the EU banned the practice of washing dead chickens in chlorine. This move was deeply unpopular with UK producers at the time with one telling me: “Everyone did it, everyone worried about it being changed, but the mandarins wanted it to go ahead and we had no other choice. So we demolished our old barns and spent millions building new ones and consoled ourselves that it would be alright because everyone was in the same boat.”

That last bit was crucial. While the UK retained membership of the EU, the quality of our meat had to abide by EU standards wherever it came from. Since most of it was produced domestically that meant that everyone had to do the same thing. 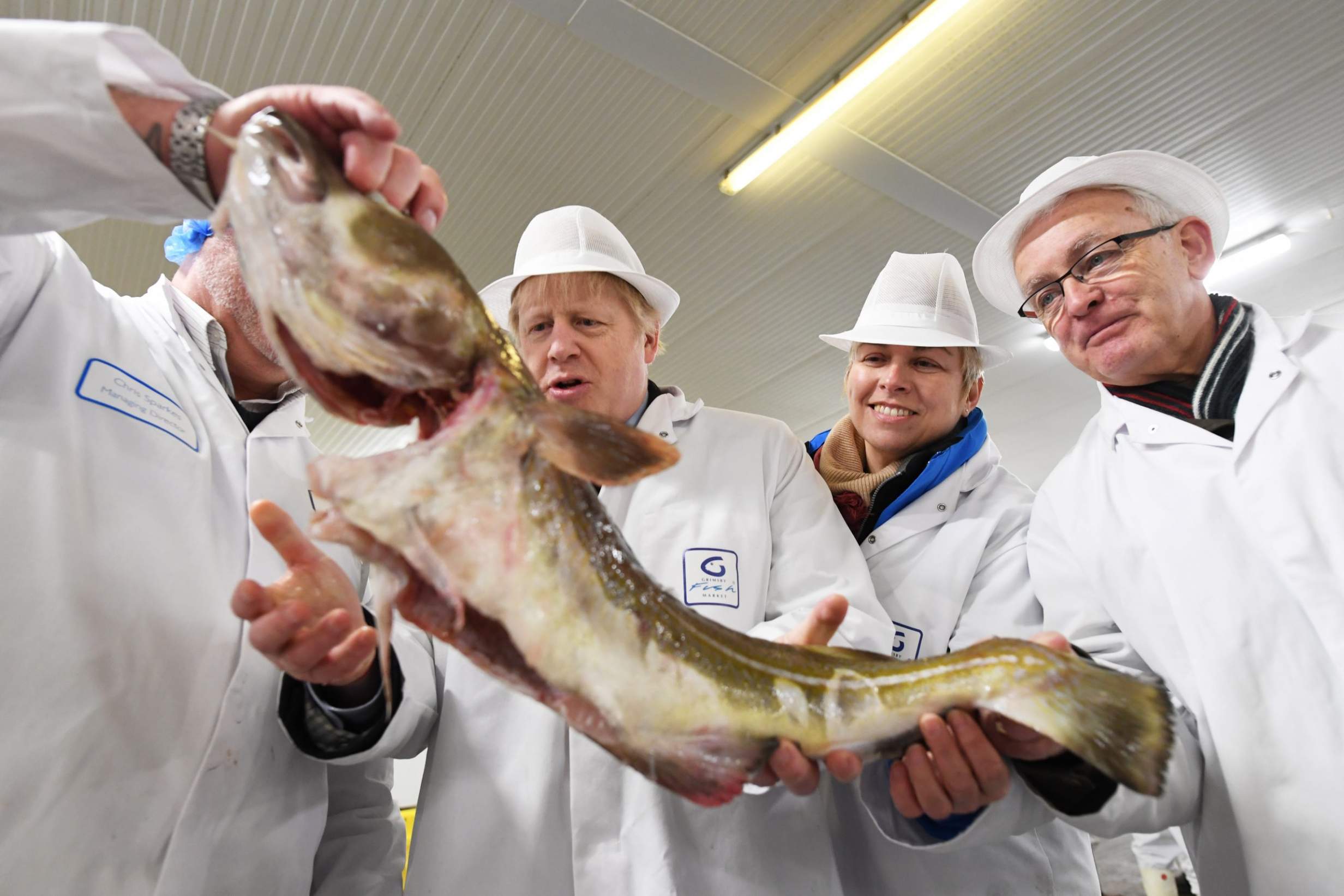 The regulations pertaining to poultry, set out in directive 2007/43/CE, are incredibly rigorous. Barns must be built to very high spec. That means concrete floors, adequate light, food, water, minimum space per bird and proper ventilation. On-site vets are employed to check on the welfare of the livestock and to ensure that disease and infection are kept at bay. Visitors are required to comply with the very highest standards of hygiene. The rigorous cleaning process between each batch of hens takes a week.

As my industry contact put it: “If hospitals were required to implement the standards of cleanliness we use all of those superbugs would be a thing of the past.”

In short, boring old directive 2007/43/CE means that the chicken in your pie, curry or sandwich has been bred to the most exacting standards of anywhere in the world.

By contrast to the EU, the US doesn’t have any standards at all: none.

Much has been made by the libertarian right of the fact that the chlorine in chlorinated chicken can’t be tasted or that ‘salad is washed in it’ while ignoring the reason why (many but not all) American chickens are processed with the stuff.

As European farmers have aimed to continually improve welfare, American producers have sought to increase their margins. US broilers spend their brief lives in crammed conditions on top of shit and mud and the carcasses of the chickens that die and thus never make it to the slaughterhouse. Chlorine is used to kill off the rampant infections, bacteria and disease that plague US poultry farms. But it is far from effective.

Take salmonella. In the US there are 1.2 million cases a year, 23,000 hospitalisations and 450 deaths. In the EU as a whole, which has a population almost two times larger than the US, there are approximately 1,766 hospitalisations and just 10 deaths. The US Centre for Disease Control and Prevention estimates that one in six American citizens suffers a food-borne illness annually. In the UK the figure is one in 132.

Boris Johnson is desperate for a trade deal with the US for no other reason than it will look like a victory. Donald Trump and his administration know that the UK is desperate. The US economy is 10 times bigger than ours. With such disparity in size, there will be very little actual ‘negotiation’. The US farming sector is enormous and the multi-billion dollar poultry sector has been hungrily eyeing the UK’s massive market for decades. EU legislation has kept it out, until now, but it sees its chance and, as such, chlorinated chicken now looks set to enter the UK. The Environment Secretary George Eustace is already talking down the risks and not ruling out the meat heading this way.

Who will that benefit? Well, in two words “American Farming”. Rolling back standards to import cheap meat will have a hugely detrimental impact on the UK poultry sector, the quality of produce in our food chain and presumably put further strain on the NHS. It won’t benefit the UK one tiny little jot.

A senior farming figure here has told me that “there will be no race to the bottom. You won’t see UK farmers seeking to emulate it”.

So there is likely to become a two-tier class of consumers. Chlorinated chicken, some of it laden with bacteria, will become the food of the poor. It will be in processed food and cheap takeaways. Still – it will make some big US corporations richer so at least someone will be happy.