Mike Stuchbery on the story of a pioneering woman chemist in 16th Century Germany.

Every weekend in Stuttgart, I wake early on a Sunday morning to head into the city centre and lead a walking tour. It’s something that I started doing after realising that so many parts of the Swabian capital have stories that even the most venerable city-dwellers aren’t familiar with. One of those stories – probably the one I love telling the most – is that of Sibylla von Anhalt, a woman far ahead of her time.

Born in the mid-16th Century, Sibylla was the daughter of the ruler of Anhalt, a principality in what is now the north of Germany. One of a number of daughters, it seemed that the most she could look forward to was a life marrying into German nobility and bearing children. Indeed, for years during her childhood and early youth, she was ‘parked’ in a convent (albeit as an abbess) until a suitable match could be found.

Friedrich, Duke of Württemberg, may not have been a ‘suitable’ match in our modern, Western sense of the word but, at the time, he certainly looked a good bet. The Duchy of Württemberg had been gaining in power and influence for more than a century and the two Duchies linked by marriage would consolidate several already developed alliances. The pair were married in May 1581 in Stuttgart, when Sibylla was only 16.

While the first couple of years of their marriage could be described as happy – she bore the Duke 15 children – his philandering ways and the pressures of court drove them apart. By the time she was 30, the pair were functionally living separate lives. Indeed, Sibylla retired to a nearby castle for a period.

Sibylla wasn’t done just yet, however. Despite the rigours of childbirth, child-rearing and juggling courtly intrigues, the young duchess had always been, and continued to be, a curious, intelligent woman. She was fascinated with much of the growing body of knowledge emerging in the late 16th Century and was particularly taken with the study of alchemy.

A pseudo-scientific nonsense, as it may seem to a 21st Century audience, alchemy held a special position in the popular imagination of Early Modern Europe. In the search for the legendary ‘Philosopher’s Stone’, many of those experimenting had made observations that would inform the blooming of ‘Natural Philosophy’ or, as later generations would call it, science.

But Sibylla was not free to follow her passion. Alchemy was considered heretical at various stages, especially during the febrile centuries of the Reformation and Counter-Reformation. Openly practising alchemy, or even discussing it, could potentially lead to accusations of witchcraft, and the late 16th Century was the start of some of the great persecutions that would ignite across the German lands.

Not to be deterred, Sibylla decided to pursue her passion under the guise of learning herbalism and the arts of the apothecary. To this end, she hired Helena Magenbuch, daughter of the Imperial Physician, who was a talented practitioner in her own right.

Together, the pair began working in the court pharmacy, just outside Stuttgart’s Altes Schloss.

Funnily enough, soon after the pair began their collaboration, Sibylla decided to place her interest in alchemy aside and fully embrace working as an apothecary. Helene taught her all she knew and soon the court pharmacy became a place that dispensed cures – some surprisingly effective for their time – to the poor of the city.

Sibylla’s interest in being an apothecary continued for the rest of her life. Once Helene retired from her position, Sibylla engaged another woman, Maria Andreae, as her court pharmacist and the two continued their practice, dispensing cures and giving advice.

By the time she died, Sibylla was being consulted by some of the finest minds in Europe, Stuttgart not being far from either Heidelberg or Tübingen, where large universities had been established in the previous two centuries.

Her patronage of the court pharmacy, her involvement in what we would consider research, and her charitable work distributing medicine to the poor set her apart from many of the rulers of her age.

Sibylla died aged 50 in 1614, six years after the death of her husband. As she was interred in the crypt beneath the city’s Stiftkirche, Maria Andreae had her coffin filled with medicinal herbs, a garland of flowers in her hands. It’s a lovely image and one that speaks of the affection that the two women had developed for each other over decades.

Unbroken: The Story of Artemisia Gentileschi

I love telling Sibylla’s story to the crowds of tourists that take my tour, simply because it is featured nowhere else in the city. It simply doesn’t fit the typical profile of the stories that get told to tourists.

Sibylla didn’t change the world, or leave a lasting trace, but she did buck the conventions of her age and make a difference to the people of the city, offering free medical care. Women like her very rarely get a statue, a plaque or poetry written about them. They don’t normally get crowds in front of the places where they lived and worked.

Sibylla was more than just a link in dynastic alliances or an incubator for future rulers. She laid a path for herself that would increase her own knowledge and the wellbeing of others around her. That’s what matters in this life and something I think about every Sunday morning.

Mike Stuchbery, 16 January 2020
Mike Stuchbery returns with his telling short histories - this time of how climate change and panic led to an explosion of persecution, mainly of women. 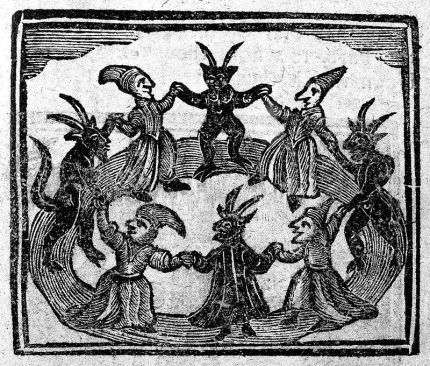