Otto English has advance copies of the plans for the coming attractions – A Nostalgia Zone, Gallery of Brexit Heroes and much more…

Hi pub landlord, Tim Martin here, with a very warm welcome to the 2022 Festival of Brexit on London’s Southbank. Over the next hour, I’ll be your audio guide as we journey into the past, present and future of the greatest country on Earth.

Press the star key to continue. *For a children’s version of this guide, voiced by Mark Francois, press 2. For foreign language editions, return the handset to the nearest steward and leave immediately by the nearest exit. Press hash to continue.*

As you walk out onto the concourse, take a moment to enjoy the statues commissioned for the festival. On your right, check out the British lion savaging French President Emmanuel Macron and other EU leaders. Next, breathe in the salty air as you admire a full-sized replica trawler, pulling British fish from the sea, while a hungry looking Spaniard looks on.

Tough luck Miguel, but for you la guerra se acabó!

Crossing the concourse, we move into the ‘Nostalgia Zone’. You’re back in a realistic creation of life in the UK before we joined the EEC. Come in and pull up the drawbridge behind you.

Notice how happy – and white – everyone looks. There’s a scout leader, helping an old lady across the road. Beyond them, joyful labourers thatch roofs as a child with rickets watches from below. Don’t worry about little Billy! A dose of Epsom salts will sort out those creaky legs!

Outside the post office, a gentleman in a suit is whispering something into his young secretary’s ear, while pinching her behind. She doesn’t mind and rightly so, because otherwise – she’d be out of a job!

But all is not well. In front of the bakery, a bobby on a bicycle is apprehending a swarthy looking foreigner. He’s come here to take our jobs, claim our benefits and talk loudly in other languages so well done PC Plod – chuck him in the slammer and throw away the key.

Emerging from the ‘Nostalgia Zone’, and you come face to face with the giant Brexit Liberty Bell. Too impractical to use, too heavy to move and far more expensive than originally intended, it is proposed that it will remain here forever as a fitting testimony to Brexit.

Behind it, is the bunker shaped ‘Temple of Odyssean’ where you can learn more about education in Boris’ Britain. While there, why not sign the kids up for the Boris Youth Movement? Whether patrolling local beaches or helping to build roads, the BYM is a superb opportunity for young people growing up in the 86th best performing economy in the world!

You’re now entering the ‘Free Britain Zone’ – a look forward to our future and all the things our Prime Minister has planned to make life better for ordinary people.

There’s a model of the Boris Bridge to Spain and another of the eight-lane tunnel to Iceland, as well as details of the manned UK mission to Mars that will put us firmly back in outer space where we belong!

Learn more about Boris himself through three vast galleries: his legendary wit, his immense wisdom, his mastery of classics and his famous modesty. And, before moving on, take a moment to read the side panel that celebrates HM Queen’s Platinum Jubilee and her 70 years on the throne.

Once you’ve finished, perhaps it’s time for a pint at The Unicorn and Magic Beans, my pop-up pub. If you’ve brought your ration cards, why not enjoy our signature dish of boiled, American-style chicken, marinated in chlorine with a margarine side.

Better grub is just one of the improvements to have occurred since we got our country back. So once you’ve eaten let’s move on to the main event: the ‘Dome of Brexit Success’.

Towering to 196 feet and with an internal area of 82 square rods (yes we’ve done away with unworkable metric measurements) the vast arena was constructed to showcase the multitude of Brexit benefits.

Drink in the splendour of the giant Blue cardboard passport in the middle of the dome, before making your way out of the venue and on to the next attraction. 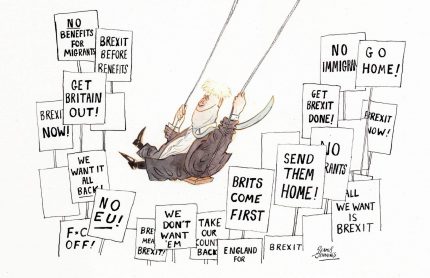 The End of a Decade Without a Name: Right-Wing Populism, Referendums, Digital Darkness and Self-Harm

We are nearing the end of the tour but there’s just enough time for two more exhibits.

Ahead of you now stands the 90 foot bronze statue of Margaret Thatcher swinging her handbag. Go between her legs and enter the ‘Gallery of Brexit Heroes’. This magical interactive waxwork exhibit brings you face to face with some of the great idols of our time. Learn more about the millions to billions struggle of Jacob Rees-Mogg.

Hear how Iain Duncan Smith became one of the towering figures of our age after attending a week-long course at the Dunchurch College of Management. Seek to understand the meaning of Esther McVey.

In the library, while away time listening to ‘Dan Hannan’ talking about trade deals with Micronesia before taking in some light-hearted banter with John Redwood on our replica Routemaster bus.

Finally there’s a chance to have a pint with a waxwork of Nigel Farage in The Dog Whistle pub. Hear how ‘man of the people’ Nigel overcame significant privilege and an expensive education to make ‘fish and sovereignty’ the central issues of our time.

The final display is the ‘Gallery of Remoaners‘ but please do exercise discretion. This exhibition is unsuitable for Mail and Daily Express readers, as it contains scenes of a James O’Brien nature.

Well that’s it folks. Stick around for the evening’s entertainment, our theatre spectacular – Brexit the Musical – a rap odyssey, written by comedian Lee Hurst and Dollar frontman David Van Day, which I am told is every bit as good as the film version of Cats.

But from me, it’s goodbye and good luck. Heaven knows you’ll need it.

*This concludes the free tour. Hand your guide to the nearest steward and pay your £85.*

Unreal People in a Hyperreal World: The Empty Rich of Succession

Mic Wright, 22 October 2021
Mic Wright unpicks the attraction by repulsion of the hit HBO/Sky Atlantic drama, partly inspired by the Murdochs, but wonders whether it gives solace to the super-rich

The Upside Down: Wish You Were Here – The Persistence of the Postcard

John Mitchinson, 5 October 2021
With emails, text messages and WhatsApp groups now a dominant feature of all our lives, John Mitchinson considers the enduring qualities of a more humble form of social communication