WORD OF THE WEEK: Whipmegmorum

(n.) a noisy quarrel about politics

So it’s official. Our next Prime Minister will either be Boris Johnson, a man so toxic that his own election team opted to shield him from public view in the opening days of the campaign for fear of him derailing his own chances, or Jeremy Hunt, a man who, alongside once forgetting his own wife’s nationality, served as Britain’s longest-serving health secretary. Quite a claim to fame, you might think—until you find that Hunt’s tenure saw a 10% collapse in the number of A&E patients seen within the NHS’ own four-hour target, alongside a 300% increase in the number of patients waiting four hours or more.

Lest we also forget that, despite that grim track record, Hunt was only removed from his position as Health Secretary when called upon to replace Johnson as Foreign Secretary after he—well, you can finish that sentence with whatever Boris Johnson catastrophe you want.

Needless to say, if we hadn’t already opted for hang-choice (“a choice between two equally unappealing options”) as our Word of the Week just a few weeks ago, it would be that that would be occupying the top line of this page. As it is, this week was Debate Week: on Sunday, Channel 4 hosted a relatively staid gathering of all of the leadership contenders (bar Mr Johnson, who at that was time still apparently wrapped in his minders’ cotton wool), while a more hot-blooded debate (with an unfettered Mr Johnson now in attendance) followed on Tuesday, care of the BBC.

This being 2019, of course, the only candidate even marginally willing to face reality promptly eliminated. Alas, that didn’t give many of Rory Stewart’s more salient points much of a chance to improve the debate, shouted down as they were amidst all the others’ fact-dodging, cross-talking and Johnsonian bluster. And it’s that that brings us to this week’s Word of the Week.

We’ve raided the Scottish National Dictionary for this one: whipmegmorum is an obscure Scots dialect word for a noisy quarrel about politics.

Etymologically, whipmegmorum started out as the name of some long-lost Scottish folk dance. In that sense, its fairly fanciful spelling suggests it probably belongs to the same category of words as the likes of hey-nonny-nonny and fol-de-rol-de-rol—namely, nonsense filler syllables used as the refrain of the song that would have accompanied just such a performance. Its earliest written record comes from an old Scots broadside, The Life and Death of Habbie Simpson, written sometime the mid-1600s, which makes a reference to “all the steps of Whip-Meg, Whip-Meg-Morum.”

We can presume the dance was probably a fairly rowdy business, as the name whipmegmorum soon evolved to establish itself as a byword for a quarrelsome conversation or argument. Its political connotations didn’t emerged until somewhat later, thanks to some (probably intentional) punning confusion with the name of the ruling British Whig party. Whipmegmorum ultimately morphed for a time into whigmigmorum, picked up a political slant, and then returned to its original spelling—with its political connotations still in tact—in the mid nineteenth century.

It has meant “an argument about politics” ever since—and with a definition like that, we could probably crown it Word of the Decade, not just the week.

More stories filed under Word of the Week

WORD OF THE WEEK: hugger-mugger

WORD OF THE WEEK: Proctor’s Bulldog

WORD OF THE WEEK: Necromorphous

Otto English, 14 July 2021
Otto English charts the different strands of English identity over the years and how a dark turn may now be giving way to something altogether more inclusive, decent and inspiring

Philippe Auclair, 13 July 2021
Journalist and sports commentator Philippe Auclair looks at the social significance of the Euro 2020 final, and compares it to the famous World Cup Victory of France in 1998 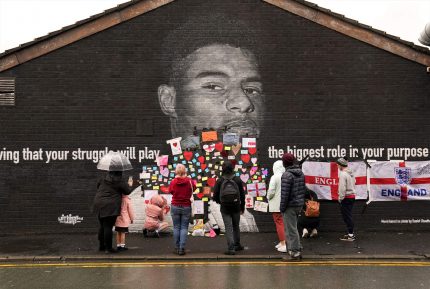