While the Government attempts to assuage the fears of the international community, it has been quashing protests at home, reports Saroj Pathirana

The International Monetary Fund (IMF) and Sri Lanka have reached an agreement for a $2.9 billion bailout to resolve the country’s economic crisis, on the condition that a deal is reached with creditors and that a reform process is set in motion.

The agreement comes as food inflation rises to 94% and amid an alert by UNICEF that staple foods have become unaffordable to many – causing malnutrition in Sri Lanka to be among the highest in the region.

Food insecurity has compounded social issues in Sri Lanka, with the UN estimating that half of children already require some form of emergency assistance. The World Food Programme recently found that nearly 30% of the population regularly skips meals.

The country’s former President, Gotabaya Rajapaksa, replaced his brother Mahinda as Prime Minister with 73-year-old (former Prime Minister) Ranil Wickremesinghe in May, following weeks of mass protest. Tens of thousands of people took to the streets as they were forced to queue for days for fuel and gas amid skyrocketing prices.

Despite unprecedented economic woes – exacerbated by a ban on chemical fertiliser in an attempt to become the first 100% organic country – Rajapaksa repeatedly refused to enter into negotiations with the IMF; while Sri Lanka’s major economic patrons, China and Japan, also distanced themselves from the crisis-hit nation.

Declaring bankruptcy, Sri Lanka halted all loan repayments in April due to a lack of foreign reserves.

Rajapaksa hoped that the appointment of veteran politicians would help to stabilise the economy and end mass anti-government sentiment. This hope proved to be forlorn, and he was forced to flee the country on 13 July after massive crowds stormed the presidential secretariat and several other government buildings.

Wickremesinghe, who led the negotiations with the IMF, was appointed President by the Sri Lankan Parliament following the resignation of Rajapaksa. 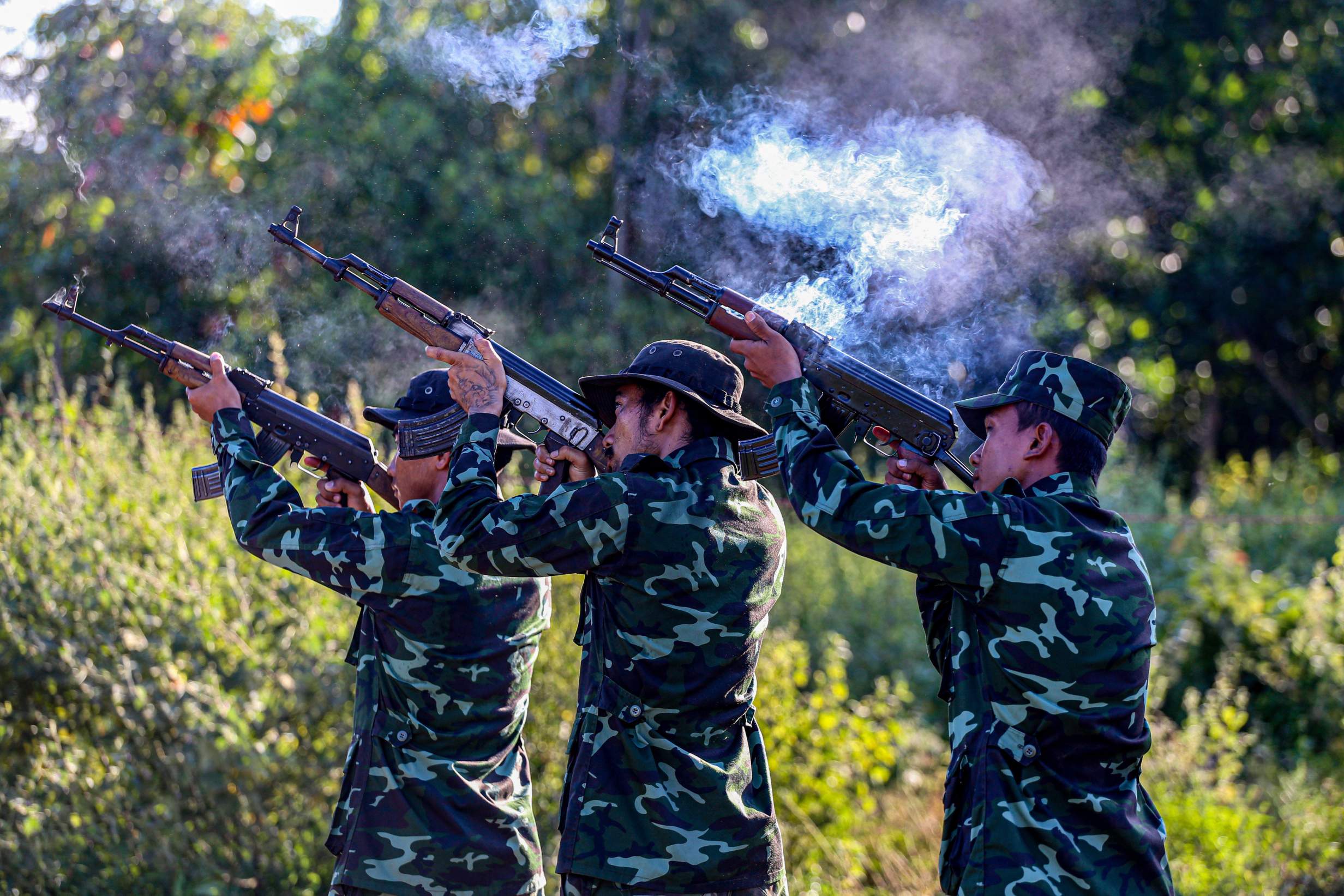 In addition to the IMF bailout package, Sri Lanka has also sought the assistance of Japan to organise a donors’ conference. Following the controversial decision by Rajapaksa to hastily pull out from a Japan-funded railway project, the country has withdrawn from at least 12 projects and there have been mixed signals about Wickremesinghe’s latest request.

However, Chandana Wijekoon, a political analyst and the assistant editor of the state-run Dinamina newspaper in Sri Lanka, says that Japan is keen to help Sri Lanka at a time of a crisis – claiming that he was personally told of these intentions by the Japanese Ambassador in Colombo.

As per the agreement, the IMF has called for the immediate resumption of debt restructuring negotiations with Sri Lanka’s creditors.

Meanwhile, China, Sri Lanka’s biggest lender in recent years – accused of encircling the island nation with a ‘debt trap’ – has refused a request for debt restructuring by Wickremesinghe.

A spokesman for the Chinese Embassy said that China has communicated to Sri Lanka authorities about its readiness to discuss how to address the debt issue three months ago, claiming that there had been no response by the Sri Lanka Government to the proposal.

Though he wasn’t the choice of the protestors, many political pundits regarded Wickremesinghe as the only person, if any, who could garner international support to steer Sri Lanka away from its present turmoil.

He promised to form an all-party government, alongside implementing economic reforms, though opposition parties refuse to form a government with the Rajapaksa-led ruling Sri Lanka Podujana Party.

While offering an olive branch to opposition parties and promising reforms, Wickremesinghe also unleashed a brutal crackdown on unarmed protestors, the majority of whom are university students.

Early on 22 July, less than 24 hours after he took the oath as the new head of state, Wickremesinghe ordered the military to attack unarmed protestors in ‘GotaGoGama’, the park in Colombo renamed by protestors as “the village to send Gota (the former President) home”, while retaking the government buildings captured by the protestors.

Since then, more than 3,000 protestors have either been arrested or questioned by police amid strong criticism from the international community, human rights watchdogs and activists.

“The Prevention of Terrorism Act (PTA) is a very serious law meant to be used in very limited circumstances,” says human rights lawyer Ramani Muttettuwegama, a former commissioner of the Human Rights Commission of Sri Lanka (HRCSL). “It is not meant to be used in the ordinary law enforcement process. And to use the Prevention of Terrorism Act to arrest people who are protestors sounds totally ludicrous actually.”

Three protest leaders have been detained under the notorious anti-terror laws for 90 days without facing a judge, and protestors receive summons to police almost daily. A member of Sri Lanka’s indigenous Vedda community, Wasantha Mudalige, is among those three leaders detained.

Their detention order was signed by Wickremesinghe the day after a UN special envoy urged him not to sign it. Mary Lawlor, the UN Special Rapporteur on Human Rights Defenders, said if that Wickremesinghe signed the order, it would be a dark day in Sri Lanka’s history.

“When you use such a serious law to arrest and detain a person who is accused of conducting a protest, it is very sad,” says Muttettuwegama.

Muttettuwegama also expressed serious concern over the hate speech directed at the Vedda community following the detention of Mudalige, and says if such a trend continues, there will be serious consequences.

As Wickremesinghe doesn’t seem to be in a mood to listen to these concerns, the international community is reported to be preparing a fresh resolution on Sri Lanka to be submitted to the upcoming United Nations Human Rights Council (UNHRC) session in Geneva.

While the IMF and Japan may yet ease Sri Lanka’s pain, Wickremesinghe is struggling on many fronts to grip this crisis. This is exactly why, it seems, he is determined not to let the protestors have their say, even if they are peaceful.

Having failed to form a much hyped all-party-government, and amid some criticism from his supporters, the political situation is expected to get more complicated with the return of Gotabaya Rajapaksa from exile.

Though Rajapaksa was accused of extreme militarisation, Wickremesinghe has relied on Rajapaksa’s structures, and in fact seems to be relying even more heavily on the security forces.

Sri Lanka’s military has so far been loyal to civilian authorities since independence and there is no immediate threat of a military take over.

Wickremesinghe said the agreement with the IMF was an important step in the history of Sri Lanka. “Not only rising from the bankruptcy crisis and the debt moratorium, it is also key to ensure that our social sectors are protected and both our economic and social aspect of our lifestyle will certainly not have any further setbacks,” he claimed.

But analysts have pointed out that the Government would not be able to use IMF funds to address skyrocketing food and fuel prices – while the IMF agreement, which needs to be approved by the executive board, will only come into effect if and when Sri Lanka implements fiscal reforms.

Therefore, if Wickremesinghe fails to address the immediate grievances of Sri Lankans – including poverty, health, food security and corruption – there will still be troubled times ahead.