An expert letter to the UK Government’s Health & Safety Executive (HSE) from one of its own advisors accuses the agency of failing to use its statutory authority to correct “seriously flawed” guidance on infection protection and control (IPC), imperilling “the health and safety of healthcare workers by failing to provide for suitable respiratory protection”.

The continued failure to protect healthcare workers by ensuring they are wearing the appropriate form of PPE (personal protective equipment) to minimise the risk of infection from COVID-19 airborne transmission, the letter says, has led to thousands of avoidable deaths. The failures amount both to “gross negligence” and serious “criminal offences”, claims the letter seen by Byline Times.

The letter addressed to HSE chief executive Sarah Albon is authored by 27-year chartered health and safety consultant David Osborn, who is a ‘consultee member’ of the HSE’s COSHH (Control of Substances Hazardous to Health) Essentials Working Group, where he has helped HSE to prepare guidance for employers and employees.

Written in his own personal capacity, the letter is a formal complaint accusing the members of the Government’s “IPC Cell” – a group of experts behind official guidance on infection protection and control – along with other senior Government officials of committing a “criminal offence… ultimately punishable by fine and/or imprisonment” by breaching Section 36 of the Health and Safety at Work Act. The letter argues that a police investigation is needed.

The guidance, Osborn writes in his letter, has failed to ensure that healthcare workers understand that they should wear and have access to respiratory protection equipment (RPE) designed to protect from COVID-19 airborne transmission.

“There is sufficient prima-facie evidence to suggest that the offence has led to the potentially avoidable deaths of hundreds of healthcare workers and the debilitating disease known as Long COVID in thousands of other healthcare workers,” the letter says.

An estimated 122,000 UK healthcare workers are now suffering from ‘Long Covid’, many of whom as a result are considering quitting their professions.

“I firmly believe that the primary source of infection was the inhalation of aerosols whilst caring for infected patients at close quarter,” says Osborn in his letter.

Apart from members of the IPC Cell, other individuals Osborn considers to be potentially culpable in these criminal failures include “senior Medical Officers within the DHSC [Department of Health & Social Care], executives within PHE [Public Health England]/UK-HAS [UK Health & Security Agency], Directors within NHS England/NHS Improvement and the other 3 nations equivalent organisations”.

Osborn argues that the surgical masks mandated for healthcare workers dealing with COVID-positive patients in general wards, ambulances and private homes, care homes and so on are quite inadequate for protecting people against lethal airborne diseases. “The correct RPE (FFP3s and equivalent) which they should have been using in all these workplace environments was restricted just to certain aerosol-generating procedures (AGPs).”

However, Osborn writes that the underlying reasons for the flawed guidance “can be traced back to decisions made by PHE and the Department of Health and Social Care (DHSC) in the first few days of the pandemic (mid-March 2020) and the ensuing dogma and policies adopted by these two departments.”

Osborn further accuses healthcare employers of breaching “Regulation 7(9) of the COSHH Regulations” which demands that when “workers need to be protected against inhalation of airborne microbiological hazards, certain types of respirator masks must be used which provide a minimum level of protection which is not provided by any type of surgical mask.”

This is despite the fact, Osborn writes, that Government authorities including HSE “have known for well over a year that COVID-19 is an airborne disease.” Public Health England had classified COVID as “airborne” as early as January 2020, the letter notes.

Similarly, “HSE knew that SARS-CoV virus (aka SARS-CoV-1 from the 2003 outbreak) was transmissible via the airborne route” as illustrated by HSE guidance on “airborne precautions” involving FFP3 masks for SARS.  The letter also points to parliamentary testimony in March 2020 from Chris Whitty, the UK Government’s Chief Medical Officer (CMO), warning that the virus emanating from China had a “very strong force of transmission” and was “airborne”, and would therefore “have the capacity to travel worldwide… The UK will not be immune to that”. 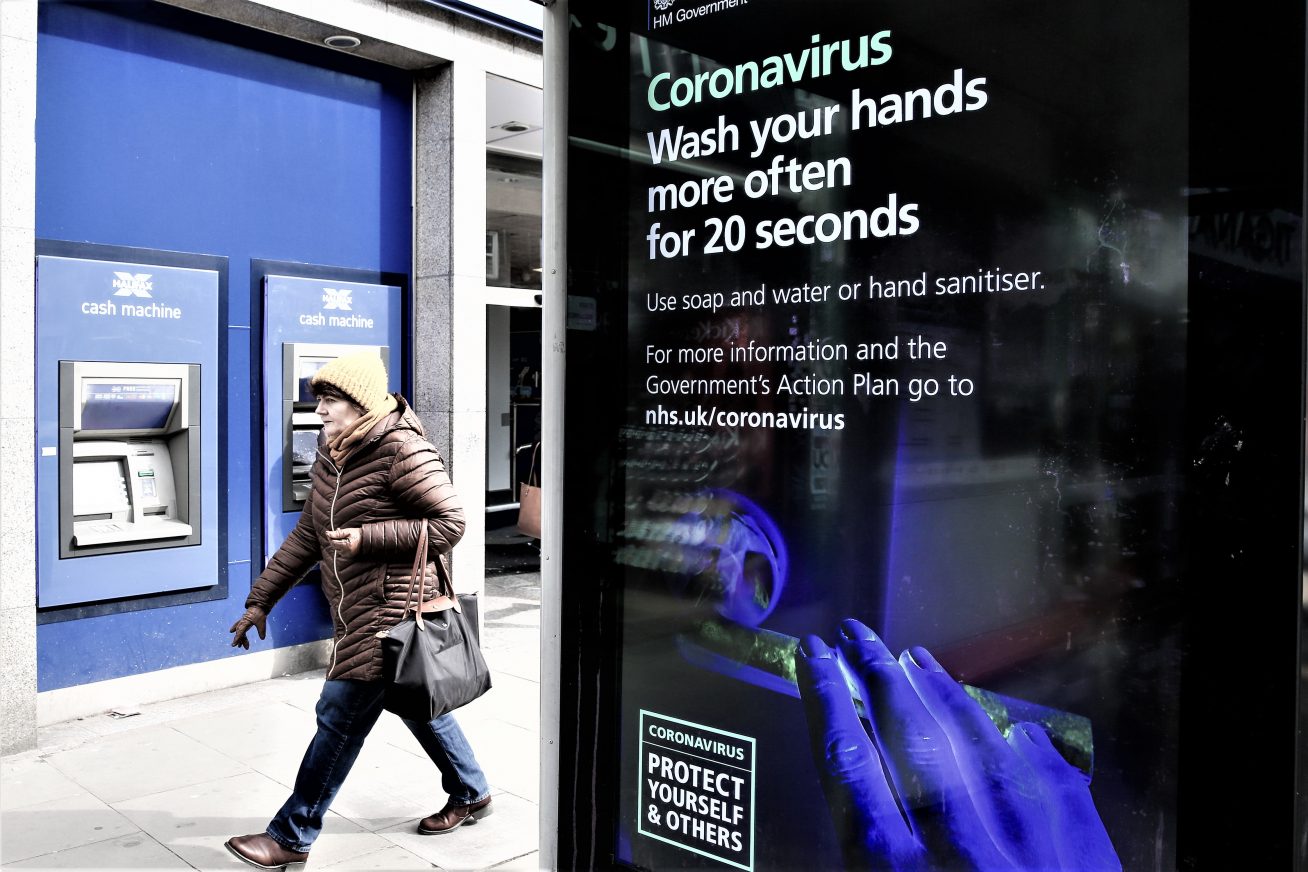 When Will the Government Finally Start Taking Airborne Transmission of COVID-19 Seriously?

The following month, HSE’s Chief Scientific Advisor further reinforced for the Government’s Scientific Advisory Group on Emergencies (SAGE) that airborne transmission of COVID-19 was possible well beyond 2 metres, and “potentially up to 7-8m”. This position was reiterated as recently as October 2021 in parliamentary testimony.

Osborn’s letter charts how guidance was systematically downgraded in March 2020 with the effect of justifying the weakening of previously strong respiratory protections. As a result, he described IPC Cell’s guidance as fundamentally counterproductive: “The beliefs and understanding of the IPC Cell are conceptually flawed, plain wrong and therefore dangerous.”

But the failure extends far beyond the IPC Cell. The HSE was “remiss (arguably derelict in its duty),” Osborn concluded, “by failing to assert its authority and not stepping in to protect the workers which it knew (or should have known) were endangered by the withdrawal of RPE.”

Osborn’s allegations are so serious that he has urged a formal police investigation alongside an HSE inquiry:

“I suggest that if this matter is considered in a Court or Inquiry, it is likely to be deemed that:

• the authors and publishers of the IPC guidance owed a ‘duty of care’ to healthcare workers and others who may be affected by their guidance;

• the ‘duty of care’ was breached by the delivery of guidance which has endangered health and arguably cost lives.

• The health of workers has been harmed and lives have been lost as a result of that breach.

You will of course recognise that the above 3 elements are the criteria which constitute ‘negligence’.

Normally, when work-related deaths occur and there is a suspicion of negligence then, under the ‘protocol for liaison’, the police will investigate alongside the HSE to determine whether offences have been committed by individuals (gross negligence manslaughter) and/or by organisations (corporate manslaughter). There is sufficient evidence to warrant such a referral to the police.”

David Osborn, whose work with HSE has involved assisting the HSE ‘COSHH Policy Team’, has been corresponding with HSE and acting Government ministers for the last six months about these issues.

Copies of the bundle of letters seen by Byline Times reveal how Osborn’s efforts to draw attention to the widespread systematic failure to protect healthcare workers fell on deaf ears across Boris Johnson’s government.

In May 2021, for instance, Jo Churchill MP – then Parliamentary Under-Secretary of State for Primary Care and Health Promotion – replied dismissively to Osborn’s concerns: “There is no requirement to increase the level of PPE worn by clinicians unless the level of care or clinical intervention indicate that a different level of PPE is required.”

Formal and official responses to Osborn’s formal complaint will set a precedent that goes beyond the UK. Up to 180,000 healthcare workers may have been killed since the start of the pandemic according to the World Health Organisation. If Osborn’s grave allegations are borne out, it will raise urgent questions about the liability of governments around the world for healthcare worker deaths.

And it doesn’t stop there. With transmission in hospitals and care homes being a pivotal factor in driving up rates of transmission across wider populations, questions about government culpability in the general COVID-19 death toll (in the UK, to date as many as 176, 813 people have died from COVID-19) may end up with shocking legal ramifications.

A spokesperson for the DHSC declined to comment with the following explanation noting that “the IPC is separate to DHSC; the department does not have the legal ability to respond given the specificity of the allegations.”

An HSE spokesperson told Byline Times: “Our round-the-clock assurance and advice around PPE, which we provided at the height of the PPE supply shortages, has been firmly rooted in the science. We confirm receipt of Mr Osborn’s letter today, we are reviewing the serious allegations that he is raising with us and will respond in due course.”

Public Health England did not respond to request for comment.