INSURRECTION AT THE CAPITOLOne Year On How QAnon Went Mainstream

It was the enduring image of the attempted insurrection at the US Capitol on 6 January 2021: a white man claiming to be deeply invested in First Nation people’s spiritual practices while supporting a white supremacist president, his face emblazoned with the stars and stripes, a horned helmet on his head.

The ‘QAnon Shaman’, who would soon be named as Jake Angeli, had brought the extremist Satanic conspiracy into the heart of American democracy.

He wasn’t the first. Already in the building that day were Congresspeople who had expressed their support, if not belief, in the baseless far-right QAnon conspiracy that suggests Democrat, Hollywood and liberal ‘elites’ are trafficking children through underground tunnels where they are victimised through Satanic ritual abuse.

Since then, at least 45 potential mid-term election candidates have been identified as supporting, believing in or quoting the conspiracy. Donald Trump himself praised followers of the conspiracy during the 2020 election race, saying: “I understand they like me very much.”

The transition of QAnon from a theory consisting of murky internet forums and extremists attacking the US Capitol to Republican representatives shows how far-right conspiracy has captured the mainstream in the US – a troubling victory for the conspiracists who took part in the attempted insurrection on 6 January 2021.

They may not have overthrown democracy that day. But the success of Q means that the threat to democracy remains.

“I started believing in Trump, his message after learning 800,000 kids go missing a year in the US that are being held captive and tortured and killed,” Nick Alvear says in the documentary Four Hours at the Capitol.

“That’s usually what gets people through the door to supporting Trump because we can all relate to having love for children. And if children are being kidnapped and tortured and enslaved sexually, it’s wrong. So with Trump absolutely trying to end that. And I believe I am part of the first wave that is bringing that awareness of this.”

Alvear was arrested for his involvement in the attempted insurrection. He became famous after a video of him smoking a joint in the Capitol’s Rotunda went viral. The comments he gave to film-maker Jamie Roberts revealed him to be a follower of the QAnon conspiracy theory which positions Trump and his supporters (the children of the light) in a cosmic battle against Satanic forces of darkness. There is absolutely no truth in the conspiracy theory and no evidence of any Satanic cabal run by liberal elites abusing children.

Angeli and Alvear were not the only Q followers who took part in the violence. It is understood that Ashli Babbitt, who was shot dead during the riots, was also a QAnon believer, while the Centre for Strategic and International Studies found that “the deadly January 6 attack on the US Capitol heavily featured QAnon supporters”.

Q followers believed that the day represented the prophesied ‘Storm’, which would bring down the network of Satanic abusers and keep Trump in power.

The conspiracy had amped-up the message aired by Trump that he had won the 2020 US Presidential Election and that the result was therefore fraudulent. QAnon followers attended the rally and the riot to “stop the steal” and prevent Joe Biden’s victory being certified. Doing so would mean that Trump could continue to rule and “save the children”.

“Hot button ‘culture war’ issues are used by cunning manipulators to draw people into far more radical, subversive movements, whose primary purpose is to cause chaos,” Imran Ahmed, CEO of the Center for Countering Digital Hate, told Byline Times. “It goes without saying that these tactics pre-date the social media age. But it’s true to say that Big Tech has been complicit in allowing subversive actors to use social media free of charge, at enormous scale, to radicalise and mobilise people to carry out violent, sometimes deadly, acts.”

The attempted insurrection failed; 6 January 2021 was not the promised Storm. But, despite the violence and lies inherent in the conspiracy theory, the Q threat in the US is likely greater than ever before – with it becoming mainstream in the Republican Party.

Voting to overturn the 2020 election result that day was Marjorie Taylor Greene, a Republican congresswoman elected in November who had previously shared the QAnon conspiracy. She claimed that Trump’s re-election offered a “once in a lifetime opportunity to take this global cabal of Satan-worshipping paedophiles out” and called Q a “patriot”. She has since “stopped believing” in QAnon and that her statements were “words of the past. These things do not represent me”.

The hard-right Arizona representative Paul Gosar also voted to overturn the election. The former dentist with Tea Party connections had planned to address QAnon followers, although this was later cancelled. He also “mistakenly” tweeted out a Q message. Gosar has faced censure for his extreme-right views and for sharing an animated video that depicted him killing Democratic Representative Alexandria Ocasio-Cortez with a sword.

Gosar is an ally of Taylor Greene and of Lauren Boebart – another representative who voted against the election’s certification and who appeared to share aspects of the QAnon conspiracy. He has also been interviewed by Matt Gaetz on the Firebrand podcast.

The Florida representative is accused of engaging in a sexual relationship with a 17-year-old girl – allegations he denies. Despite its stated objection to abuse of minors, QAnon followers have rushed to Gaetz’s defence and declared him innocent, suggesting that they are less concerned with issues of sexual misconduct among elites and are simply a far-right, pro-Republican conspiracy.

That various Republican representatives have either supported QAnon, won support from QAnon and failed to condemn a violent neo-fascist conspiracy which is rooted in antisemitic tropes demonstrates how the far-right has captured the modern Republican Party. It shows how the extremists marching on the Capitol last year have succeeded in bringing their agenda into the core of a US political party. 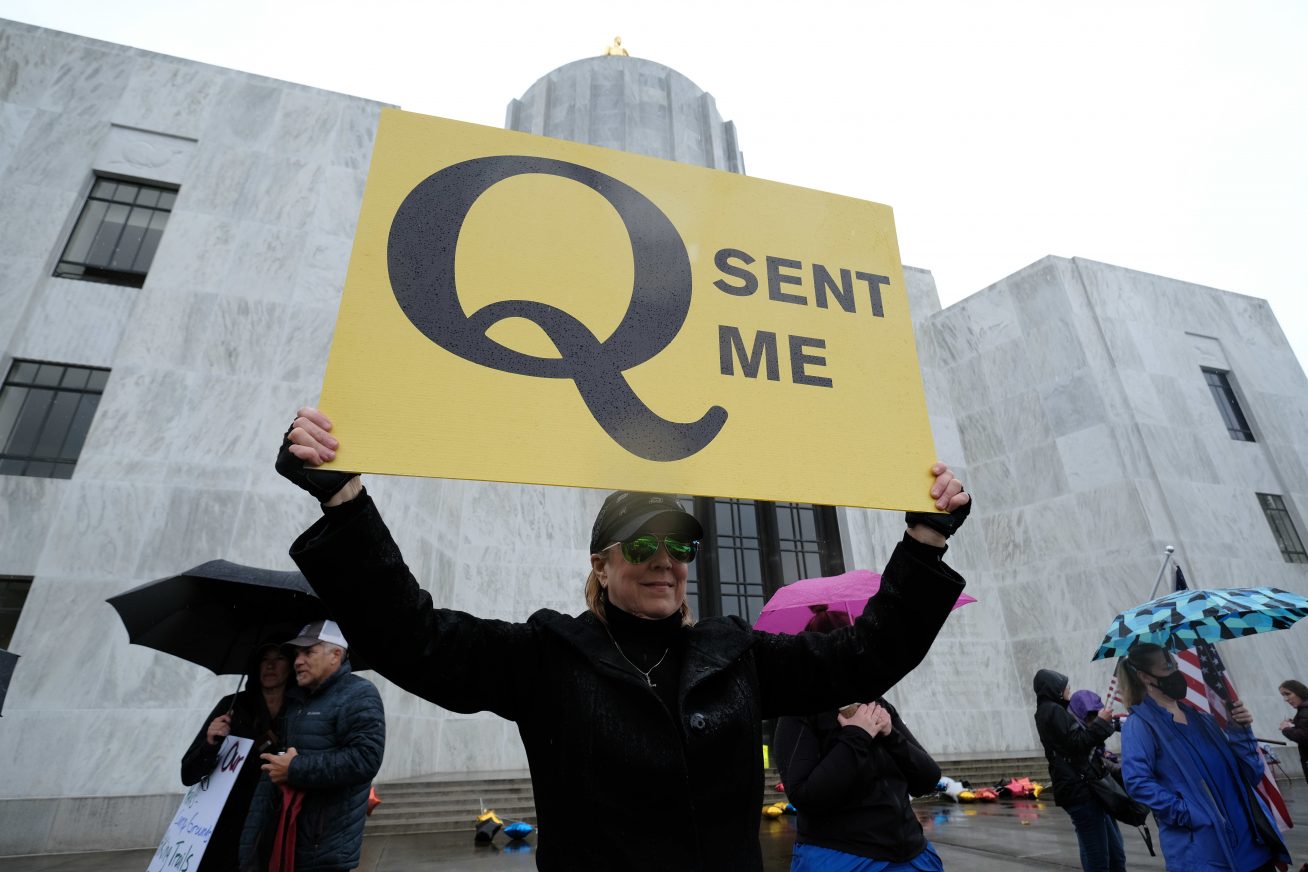 Now, it’s set to get worse. Nearly 50 congressional candidates standing in this year’s mid-term elections have links to QAnon, the majority of which are Republicans.

Some, like Daniel Wood in Arizona, have repeatedly mentioned the QAnon slogan in since-deleted tweets, while Paul Guiterrez in California has shared content from QAnon influencers. Extreme examples include Brian Perras in Florida, who has repeatedly called Hollywood celebrities “baby blood drinkers”.

“My question is to Americans is: are you looking at the states with the contested elections, the tight races where their surrogates, many of whom are supported by QAnon, and promoted by QAnon media?” Anne Nelson, author of Shadow Network: Media, Money and the Secret Hub of the Radical Right told Byline Times. “Are you looking at those, are you trying to safeguard our democracy, not to push the country to the left but to maintain a civil centre where we can have an actual functional democracy? Because that is not their concept of how things should be.”

The mainstreaming of QAnon means that an estimated one in five Americans now believe in the conspiracy theory, with that belief leading to violence there and around the world.

As well as the deaths at the US Capitol, there have been incidents in which QAnon followers have killed their own children.

A California father took his children to Mexico where he killed them, claiming that he had been “enlightened by QAnon and Illuminati conspiracy theories” and that by killing them he was “saving the world from monsters”. Similarly, a mother in California killed her three children following months of depression where she became increasingly influenced by QAnon.

Other incidents include a woman described as an “infamous QAnon mom” killing an amateur legal expert she had turned to in order to get child custody advice. Even the UK is not immune: a British man is facing trial having attacked his pregnant girlfriend after becoming obsessed with the conspiracy theory.

It is important when discussing fatal violence such as this not to diminish the responsibility of the killers or to wholly accept their narrative of their actions. However, if nothing else, QAnon is giving cover and providing justification to violence and killings – not least because QAnon influencers are accused of calling for their followers to “shoot to kill” healthcare workers delivering the COVID-19 vaccine.

Jim Stewartson, an Emmy Award-winning games producer who exposes far-right extremism and co-hosts the Radicalized: Truth Survives podcast told Byline Times: “The Republican Party has been completely captured by what I now simply refer to as the Cult.

“A recent poll said that only 6% of Republicans believe that Joe Biden’s victory was ‘definitely legitimate’. It started before the 2016 election with Pizzagate, then moved on to QAnon. Now it is anti-vaxx, the big lie, and anti-democratic propaganda. But at the end of the day, the goal is a fascist theocracy.”

Heidi Siegmund Cuda is a co-host of the Radicalized: Truth Survives podcast