Lessons Still Not Learnt From The Windrush Scandal

Four years on, only 5% of victims have received compensation, a training programme is still not up and running , while the promised returning resident visas are being denied

When the Windrush scandal broke in 2017, the Home Office commissioned a Lessons Learned Review, that included plans on how to avoid a repeat of the injustice endured by the Windrush families.

The UK Government had erroneously classified thousands of legal residents as illegal immigrants after they arrived from Commonwealth countries between 1948 and 1973. These were people who had migrated to the UK, often as children, as part of the Windrush generation – when families living in Commonwealth countries were invited to come to help rebuild after World War Two. Despite having lived in the country for almost their whole lives, the victims were told they had no “legal right” to remain.

However, it’s unclear what lessons can be learned from the Windrush scandal when the Government appears to have yet to implement Recommendation Six from the review. This recommendation suggested developing a “comprehensive learning and development programme which makes sure all its existing and new staff learn about the history of the UK and its relationship with the rest of the world, including Britain’s colonial history, the history of inward and outward migration and the history of black Britons.”

The migrant-rights charity Bail for Immigration Detainees shared on Twitter how the Home Office had “admitted to us today that it still hasn’t developed the training.”

Byline Times contacted the Home Office to confirm whether or not this was the case.

“We have worked tirelessly to respond to all aspects of the Windrush Lessons Learned Review and to ensure that nothing like the Windrush scandal can be allowed to happen again,” a spokesperson explained. “At the heart of this work is a transformation programme which is designed to shift our department’s culture, to ensure our staff are focused on people, not cases, and to help us become a more diverse organisation which better represents this country.”

Despite this commitment, the Home Office faces criticism for the ongoing failure to properly compensate those impacted by the scandal. Four years after the story broke, only 5% of victims have received compensation, prompting calls that the scheme should be taken out of the Home Office’s hands.

And far from ensuring it’s not happening again, people from former Commonwealth countries, who were wrongly given visitor visas during the 1980s and are now attempting to apply for returning residents visas via the Windrush scheme, are being rejected because they cannot provide the correct paperwork proving they had previously settled in the UK. 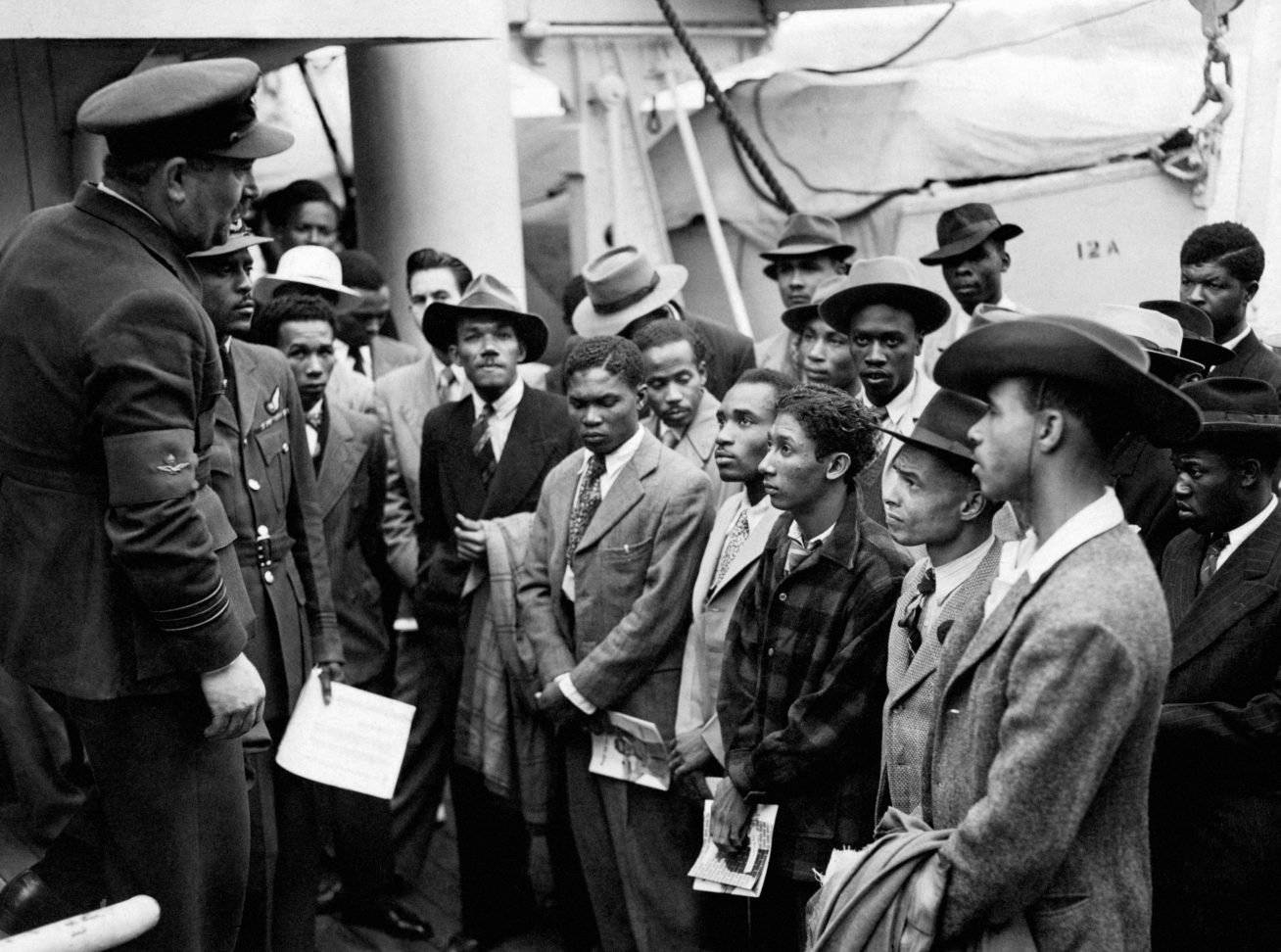 This was the case for lawyer, chartered accountant and mother of five Anne Eze. She moved to the UK from Nigeria aged seven, in 1971. Her father was already living in Staffordshire, where he worked in the Silverdale Colliery. When her younger brother was born two years later, her parents took her and the baby back to Nigeria while her older brother remained in the UK.

Ann decided to return to the UK to reunite with her older brother when she was 21, in 1986. This was before a law change two years later, when Commonwealth citizens who had lived in the UK were stripped of indefinite leave to remain or indefinite leave to enter.

However, Ann was incorrectly given a visitor visa by the British High Deputy Commission in Lagos. When she arrived she discovered she would not be able to work or study in the UK – the place where she had family and which she considered home.

“As a girl who was trying to make meaning out of her life, the only option I had was to come back to Nigeria” she told Byline Times.

When the Windrush scheme was announced in the wake of the scandal, Ann decided to try and return to the UK again. She was hopeful that having lived here as a child, and the fact she had been issued the wrong visa in 1986, she would be able to get a returning resident visa. Instead, the Home Office said “you state that you lived in the UK between 1971-1973 … However, you have not been able to provide any documentation to confirm this residence.”

The Home Office added she had not “demonstrated sufficiently strong ties to the UK under returning resident requirements.”

Just as with the Windrush victims from the Caribbean, Ann was left scrambling around for paperwork to prove her UK history – paperwork that had long been destroyed. She told Byline Times how the Home Office said “they could not judge my international passport, that first passport I went to London with, because it belonged to my mother”. She was also told her 1986 visitor visa was considered insufficient evidence.

“What other evidence could I give if the international passport is disqualified?” she asked.

Determined to get proof, Ann contacted her old primary school in Staffordshire, but they no longer held her records. A memory of a broken bone led Ann to wonder if there were hospital records proving she had lived in the UK, only she couldn’t remember the name of the hospital. With no paperwork and her passport rejected, Ann is running out of options.

Helping her at every stage has been Gertrude Chinegwundoh, Secretary of the Ebe Union UK, a community organisation. She wants to raise awareness among the British public that far from being a scandal that impacts solely on people from the Caribbean, experiences like Ann’s prove that Windrush is a “Commonwealth scandal.”

Chinegwundoh works with Nigerian people who have been denied returning resident visas. The visa is open to people who had previously settled in the UK. But for people like Ann, it fails to take into account how some Nigerians were illegally denied reentry to the UK before 1988.

This may be why Nigerians have fared so poorly when applying for returning resident visas. Just 17% of the 337 people in Nigeria who applied to return have been accepted under the scheme, half the rate of acceptance for applicants in Jamaica.

“Calling it the Windrush Scandal has caused so much confusion in the mainstream media,” Chinegwundoh told Byline Times.

John (not his real name) faces a similar battle. He was given incorrect advice from Home Office officials during the 1980s when he came to the UK from Nigeria. Like Ann, he was told he could not stay in the UK, even though his passport had an “indefinite leave to enter” (ILE) stamp and he had previously lived here.

In 1986, John claimed he had been wrongly told by the British Deputy High Commission in Lagos that he should apply for a visit visa. His applications were unsuccessful.

Under the Windrush scheme, John contacted the Home Office to apply for a returning resident visa. However, he was told, “there was insufficient evidence to substantiate [his] claim to have been advised incorrectly by officials in the British Deputy High Commission in Lagos”. The Home Office also stated there was “no evidence” that John made “any applications to enter the UK, nor that you attempted to enter the UK using your ILE stamp” between 1984-88.

“This is a common story,” Chinegwundoh told Byline Times. She is particularly concerned that there may be many more people in Nigeria who have a legal right to apply for a returning resident visa but simply don’t know they can apply or who, once they do apply, are stymied by not having the right paperwork.

“The Windrush scheme has not been publicised in Nigeria,” she explained. “So there are affected individuals who do not know that they can apply to return to the UK.”

Ann’s and John’s story may differ from many of the Caribbean Windrush victims, in that they were denied the right to settle in the UK rather than deported at a later date.

But underpinning both experiences is the hostile environment – a raft of policies designed to make it more difficult for people to migrate to and settle in the UK.

This includes the demands for paperwork that has been lost or destroyed – a demand that caused the Windrush scandal in the first place – as those who came over as children on their parents’ passports, and whose landing passes had been destroyed in 2010, were unable to demonstrate how they came into the country.

“I have had lengthy discussions with Home Office representatives about publicising the schemes in Nigeria,” said Chinegwundoh. “But so far, nothing has been done as far as I know.”