British Government ministers have met at least 209 times with lobbyists from the oil, gas, coal and nuclear industries in the two years before the COP26 UN climate summit, an exclusive analysis by Byline Times can reveal – including companies that have promoted climate disinformation for COP26 itself.

The new analysis of Government transparency data shows that from January 2020 up to June 2021, ministers at the Department for Business, Energy and Industrial Strategy (BEIS) met obsessively with conventional energy giants – including some of the world’s most carbon polluting industries.

The company that lobbied the UK Government the most was global Netherlands-based oil giant Shell – having met BEIS ministers a total of 44 times. Yet new data from Eco-Bot.Net seen exclusively by Byline Times confirms that Shell was also one of the top spenders on “greenwashing ads” on Facebook in the run-up to COP26.

The analysis helps explain why despite presiding over the UN climate summit, Britain has refused to join the Beyond Oil and Gas Alliance of countries, spearheaded by the Netherlands and Costa Rica, calling to fix a date to phase out fossil fuel production.

A Frenzy of Lobbying

Ministers met with companies on both a one-to-one basis and in group meetings with fossil fuel firms, with a lesser number involving a mix of incumbents and renewable companies.  Most of the meetings involved direct engagement with the fossil fuel and nuclear sectors.

The data appears to pull back the curtains on the vast extent to which the UK Government has been captured by interests linked to Big Oil and other ecologically-dangerous conventional energy industries.

Although the new figures underestimate the total number of meetings because data for the last few months from July onwards is not yet published, the analysis reveals that the British Government met repeatedly with four of the biggest oil companies in the world – namely ExxonMobil, BP, Total and Shell.

Each of these firms has been involved in funding climate disinformation.

Although Shell lobbyists met the UK Government the most, this was followed by UK oil giant, BP, with which ministers held 36 meetings.

That was closely followed by the Norwegian state oil company, Equinor, with whom ministers met 35 times.

Several of these companies, including Shell, BP and ExxonMobil, formally advise the UK Government on its net zero strategy as part of the BEIS-hosted CCUS Council – illustrating the extent to which the Government’s scientific understanding of net zero has been disfigured by the world’s most powerful fossil fuel lobbies.

It’s particularly alarming that all three companies – which are closely advising the British host of COP26 – have been heavily involved in funding climate science denial and anti-climate action. For Shell and ExxonMobil, this continued in the run-up to COP26.

In October, OpenDemocracy revealed that BP had spent years spying on peaceful climate campaigners, including hiring a private intelligence firm set-up by a former MI6 officer. Both BP and Shell have until as late as last year supported lobby groups opposed top climate action. ExxonMobil is also one of the largest funders of climate science denial.

Much of this has continued until recently. InfluenceMap has found that between 2015 and 2018 alone, ExxonMobil, Shell, Chevron, BP and Total collectively spent $1 billion promoting misleading climate-related branding and lobbying.

Data provided exclusively to Byline Times regarding Shell by Eco-Bot.Net reveals that the oil giant spent up to £380,000 on running 22 “greenwashing ads” on Facebook in the run-up to COP26.

The “greenwashing ads”, run between January and October 2021 according to Eco-Bot.Net, predominantly push the idea that Shell is committed to sustainability and the environment when their wider business contradicts this.

While Shell was running its Facebook ads in this period, a Dutch court ruled that by 2030 the firm must slash its absolute emissions by 45% – the oil giant said it was “disappointed” by the ruling and plans to appeal. As the world’s largest oil and gas trader, Shell produced 1.38 billion tonnes of CO2 in 2020, which is roughly 4.5% of global energy-related emissions that year.

Representatives of Shell, BP and ExxonMobil were among the firms grilled by US lawmakers in Congress in October over their opposition to climate action. When urged to cut-off funds to any group supporting climate science denial, they simply refused. 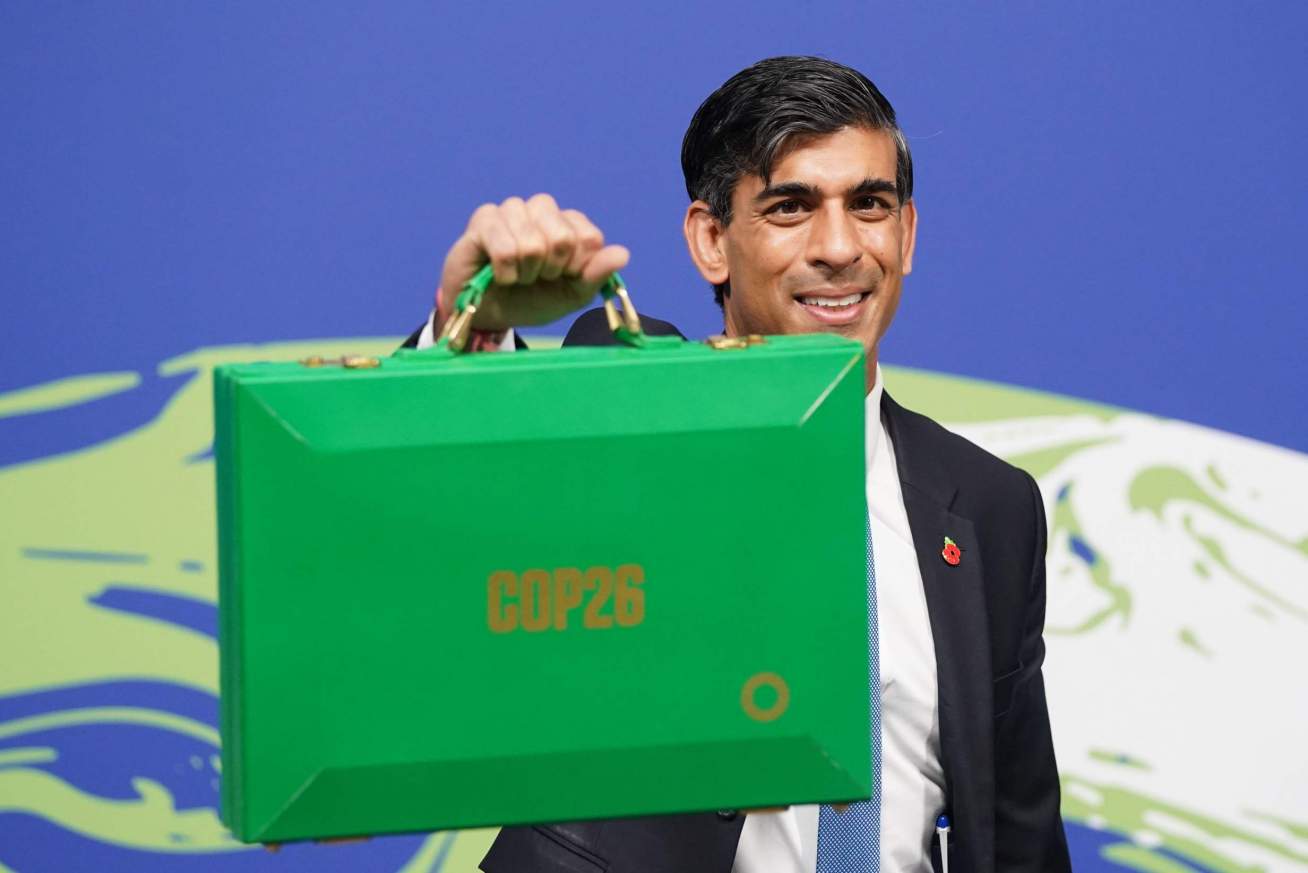 A spokesperson for Shell said:

“We’re already investing billions of dollars in lower-carbon energy. To help alter the mix of energy Shell sells, we need to grow these new businesses rapidly. That means letting our customers know through advertising or social media what lower-carbon solutions we offer now or are developing, so they can switch when the time is right for them. But the world will still need oil and gas for many years to come. Investment in them will ensure we can supply the energy people will still have to rely on, while lower-carbon alternatives are scaled up.”

The UK Government’s net zero strategy focuses almost entirely on CCUS, hydrogen and fuels from biomass. Byline Times’ analysis of the Government’s transparency data confirms that these largely speculative technologies have been heavily touted by the same oil, gas, coal and nuclear lobbies with which the Government met at least 209 times since January 2020 – including Shell, BP and ExxonMobil.

But there’s scant scientific evidence that these technologies will even work. According to energy transition expert Julian Allwood, Professor of Engineering and the Environment at the University of Cambridge, a former lead author for the Intergovernmental Panel on Climate Change (IPCC), the Government’s plan is based on a “fanatically religious belief” in these immature future technologies.

Speaking at the Royal Institute of British Architecture’s Built Environment Summit in October, Allwood – who is head of the UK FIRES consortium involving six leading universities including Cambridge, Oxford and Imperial College London – said that none of the technologies favoured by the Government are likely to have a significant impact in the time available. Carbon capture technologies, in particular, he said, would be unable to scale up fast and effectively enough to make a meaningful difference to CO2 levels by 2050.

When this was put to BEIS, a Government spokesperson said: “Carbon capture will have a key role to play as we move towards net zero, as recognised by various independent bodies including the Climate Change Committee, and low carbon electricity overall already gives us around 50% of our total generation, with wind providing nearly two-thirds of Britain’s electricity in May this year.”

Byline Times’ new analysis suggests that the extensive lobbying from incumbent energy industries has played a key role in the Government’s ignoring of the most effective pathway to net zero and beyond.

According to a peer-reviewed study in Nature Energy published in 2019, solar, wind and batteries “are already deployed at scale and have demonstrated a rapid expansion potential”, and provide far higher returns on energy than CCUS. The implication is that net zero would be more realistically achieved by simply accelerating the deployment of these renewable technologies. “Therefore, renewables plus storage provide a more energetically effective approach to climate mitigation than constructing CCS fossil-fuel power stations,” the paper found.

But the fossil fuel lobby’s heavy influence on the UK Government provides crucial context to understand how COP26 has itself become a massive gateway for global fossil fuel influence. A record number of 503 people linked to fossil fuel interests have been accredited for the summit according to human rights group Global Witness.

The Byline Times analysis suggests that this is no accident, but a direct consequence of the British Government’s incestuous ties with fossil fuel and nuclear lobbies.

The BEIS spokesperson dismissed the concerns raised by Byline Times as “absurd”, insisting that: “We make no apology for meeting major energy producers and suppliers during a global pandemic. ​This is even more important as we work towards ​what must be a shared endeavour of decarbonising industry and ensuring we end our contribution to climate change by 2050.”

But the above explanation is simply false. The majority of these meetings, according to the Government’s own transparency data, did not concern the pandemic – but were focused on energy, net zero, decarbonisation, business, industry and Brexit.