Inside the World of Secret Polygamous Marriages

“It’s a matter of betrayal, lies, deceit… this is what I’ve been going through,” says Aysha (not her real name). “I have had five miscarriages… and the loss of that is nothing compared to what he did to me.”

Aysha is describing how she felt after learning that her husband, Mohib, had secretly married another woman. Because the couple married under Islamic Sharia law – which allows multiple marriages – but did not obtain a UK civil marriage, Aysha now lives in a legal limbo.

Mohib began his affair in 2017, when Aysha was pregnant with their second child. He now splits his time between his second wife Samira and Aysha and their children.

Aysha is not alone. In the UK, it is believed that there are hundreds of Muslim women whose husbands have secretly married second wives. It has become a sub-culture within Muslim British communities, and men are able to get away with it by only registering one marriage under civil law, and then having multiple Islamic marriages (known as nikah).

Bigamy, the practice of marrying more than once while already married, is illegal under the Offences against the Person Act 1861. But because these multiple marriages are not legally recognised, they do not count as a bigamous offence.

The practice leaves women with little legal protection and no financial support should they choose to leave.

Register Our Marriage is a campaign founded by solicitor Aina Khan in 2014 to address the issue of unregistered religious marriages. While few records of Islamic marriages exist, a 2017 survey of almost 1,000 British Muslim women showed that more than 60% of British Muslim women had a nikah-only ceremony.

This was challenged in 2018, when the High Court ruled that a nikah between Nasreen Akhter and Mohammad Shabaz Khan should be considered a legal marriage in the UK. However last year, the Court of Appeal overruled the decision and declared a nikah had no legal effect. It ruled that Akhter and Khan’s marriage “was a marriage entered into in disregard of certain requirements as to the formation of marriage” and should be regarded as a “non-qualifying ceremony”.

Helping to facilitate the polygamous sub-culture are multiple online platforms offering men the chance to meet a second wife. This is particularly true on Facebook, where one Muslim marriage polygyny group has more than 16,000 members worldwide.

Entrepreneur Azad Chaiwala’s SecondWife.com website doesn’t disguise its offering.  “You’ve made one of the best decisions of your life by joining SecondWife.com and we hope it really works out for you,” its homepage announces.

Using the same mechanisms as any online dating website, it caters to the precise needs of those looking for a polygamous marriage. The site had 100,000 members in 2017, but now boasts, internationally, some 400,000. Chaiwala claims that he makes no money from it.

While the site is far less popular than other match-making sites for Muslims – such as Muzmatch or SingleMuslim – the site has continued to generate interest. SecondWife.com ensures that its users understand the law, warning them to remember “the legal status regarding matrimonial polygamy where you reside”. By joining the site, users indicate that they have created an online profile in order to seek a polygamous relationship.

Byline Times went undercover to learn what men required from a second wife – posing as a 25-year-old woman keen to find a man to marry her. Our undercover disguise was described as a “homebody” who worked with children at a primary school in London. She received more than 8,300 notifications, hundreds of messages and ‘likes’.

One man who expressed an interest described himself as a “dominant male” looking for a “down to earth, relaxed, easy-going person that understands her role as a wife”. Another requested “please no modern Muslim sisters or YouTube sisters”. Under the heading ‘work, life, hobbies, and goals’, he wrote: “I am looking for a simple righteous wife.”

Some of the men felt confident telling her how she should or should not dress. One user asked her to remove her face-covering to “get to know her better”. In contrast, one man told her that her eyes were “very attractive” and shouldn’t be “public”.

Rukhsana was married for 25 years and had five children with her husband before she found out about his secret second marriage.

One day, he had complained of chest pains. Worried that he might be hiding an illness to protect his family, Rukhsana checked her husband’s phone for any indications. There, she found intimate, sexual messages between him and his second wife, Bilqees. The pair had met through Secondwife.com. She later found a marriage certificate that showed a gift payment of of £30,000 from her husband to his new wife.

“I feel like my marriage has been caught up in a scam,” said Rukhsana. “Me and my family are collateral damage in this.”

Relationship counsellor and therapist Afshan Khan specialises in counselling Muslim couples and children. Over the past five years, she has spoken to more than 300 women who have found themselves in polygamous marriages against their will.

“Most of the [women] I’ve spoken to are suffering from depression, high anxiety, betrayal [and] anger,” she told Byline Times. “Usually in my experience, the second marriages don’t last more than a year.”

Khan has also seen the detrimental effects on mental health that secret second marriages can have on any children involved.

“I remember one particular case I was dealing with and the girl just couldn’t get over that this person their father had married was just a few years older than her,” she said. “It broke up the family dynamics completely. She went into a deep depression”.

Khola Hasan is a scholar at the Islamic Sharia Council in Leyton, London – the oldest Sharia council in the UK. She has arbitrated for many women who have asked for a divorce due to their husband’s secret second marriage. Khola emphasises the importance of registering marriages under civil law, as well as under Islamic law.

“If they have not had a civil marriage, and have had only a nikah, then they are actually stuck”, she told Byline Times. “If she is financially dependent, she can get absolutely nothing in a divorce because the courts will not entertain an Islamic marriage.”

Rukhsana is now trying to obtain a divorce from civil courts. However, obtaining an Islamic divorce is much more difficult.

Parties seeking an Islamic divorce must first find an iman, an Islamic leader, willing to grant one. But, because divorce remains stigmatised in the Muslim community, this can be a lengthy process – as Rukhsana is discovering. She has spent more than a year trying to obtain a divorce from her local Sharia council.

Rukhsana’s husband’s secret second marriage has put her through financial difficulty and emotional trauma. She hopes that by sharing her story, other women can know the dangers of secret polygamous marriages and protect themselves.

Sascha Lavin, 20 September 2021
A Freedom of Information request analysed by the Byline Intelligence Team reveals the extent to which the capital’s police officers work in a culture of impunity around sexual misconduct 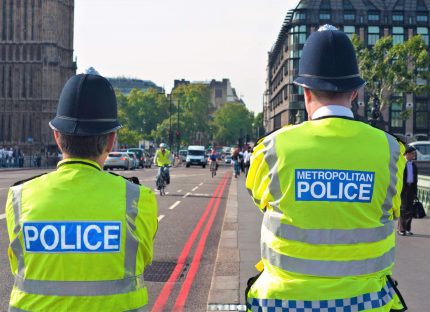