The ‘anti-woke’ platform is merely a new incarnation of a years-long campaign, explains Julian Petley

GB News kingpin Andrew Neil constantly complains that even before it hits the airwaves, his new platform is being unfairly characterised as right-wing, populist and the British equivalent of Fox News.

However, even a brief look at his own remarks about the channel and at the kind of presenters that he has appointed suggests that there are very good grounds for such judgements.

For example, in the Sunday Express on 7 February, Neil described the current state of broadcast news as “increasingly woke and out of touch with the majority of its people” and “too metropolitan, too southern and too middle class”.

In his view, many “sensible people” who don’t share what he claims are the “liberal-left assumptions” of many broadcast journalists “feel left out and unheard. There’s a restlessness, a sense that they’re being talked down to; that much of the media no longer reflects their values or shares their concerns. GB News is aimed squarely at those people”.

As for his own offering, “We will not operate on the assumption that every problem demands a government solution. Or that every solution must necessarily involve more taxpayers’ money,” Neil said. “GB News will be proud of our country, even when revealing its shortcomings and its inequalities. Our default position will not be to do Britain down at every turn.”

This is the description of a small-state, nationalist-populist network, by Neil himself.

It’s also worth pointing out that one of the channel’s founders, Andrew Cole, told his LinkedIn followers that the BBC was “possibly the most biased propaganda machine in the world,” called the Guardian “a disgusting, extremist rag” and Bloomberg “very suspect” and “almost unreadable”.

And what of the presenters? Amid a smattering of those whose views appear to be fairly neutral or are not (yet) a known quantity, we find a veritable gallimaufry of pundits who would normally grace the pages of the populist press:

Former Sun executive editor and currently MailOnline columnist and talkRADIO presenter. A BBC-hater, he used his column in the Sun, 28 August 2020, headlined ‘Beeb’s leftie elite doesn’t report the news, it shapes it’, to describe Newsnight as “a rogue, partisan operation that represents everything that’s wrong about the BBC” and “shamelessly out of touch, moronically preachy and totally hypocritical”.

Dewbury stood as an independent, pro-Brexit candidate in the Hull West and Hessle constituency at the 2017 General Election and stood for the Brexit Party in the same constituency in 2019.

A regular contributor to Spiked, The Spectator, Telegraph, Sun, Daily Mail and the Mail on Sunday, and author of the anti-‘woke’ manifesto Free Speech and Why It Matters. Doyle will host a weekly show entitled Free Speech Nation.

The founder of Free Speech Champions, an arm of Toby Young’s Free Speech Union which was developed in collaboration with the Battle of Ideas group. The latter is part of the same labyrinthine cadre as Spiked, to which Folarin Iman contributes, as well as to the Telegraph and Mail.

Harwood worked for the right-wing blog Guido Fawkes from 2018 to 2021 and as a Telegraph columnist from 2019 to 2021. While at Durham University, he became the national chair of pro-Brexit campaign group Students for Britain, an arm of the official Brexit campaign organisation Vote Leave. He was in LBC’s list of the top 100 most influential Conservatives of 2019, and will be the political correspondent of GB News.

Formerly a senior researcher at the Centre for Social Justice, the right-wing think-tank founded by former Conservative leader Iain Duncan Smith, and a member of the Commission for Race and Ethnic Disparities that concluded that Britain is not institutionally racist. She has written frequently for The Times and is a regular columnist for the Sun, which described her as “one of the country’s leading young intellectual voices” and “a proud Conservative who has no truck with ultra wokeism and loathes cancel culture”.

Worked as UKIP’s head of media for three years before being elected as a Brexit Party Member of European Parliament. Phillips contributes to the Telegraph and hosts a twice-weekly show on talkRADIO.

Like Neil, Oliver is an extremely vocal critic of the SNP, describing the uncertainty caused by the prospect of a second referendum as a “cancerous presence”, accusing Nicola Sturgeon of “making a fool of Scotland” and saying that she made him “sick to my stomach”. 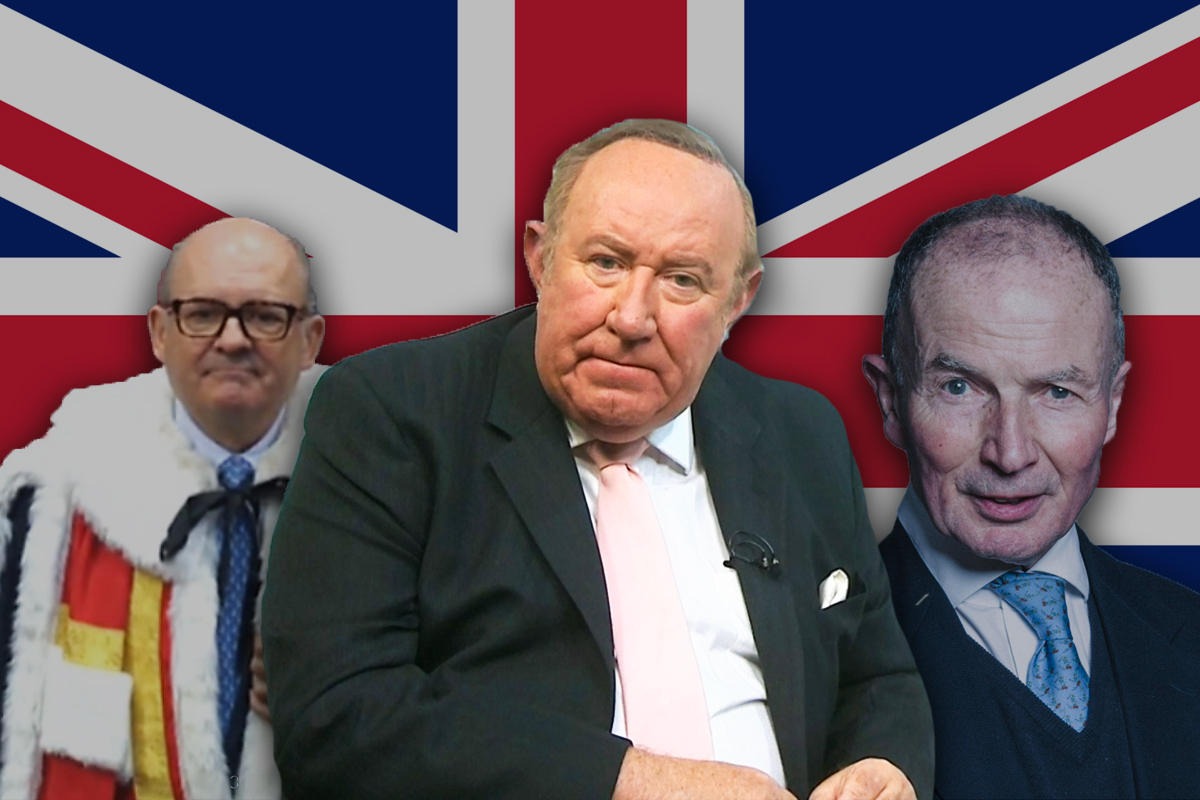 Andrew Neil has made one of the main selling points of GB News a war on what he calls ‘woke’. This is, of course, simply a lazy boo-word or form of ‘unspeak’ which enables those who use it to caricature and dismiss views with which they disagree, without actually having to bother to engage with them.

Thus, Neil’s own flagship evening programme will include a ‘Wokewatch’ segment, and doubtless we can expect much more of the same from Free Speech Nation, judging from Doyle’s numerous outpourings.

In this respect, Neil’s current war on ‘woke’ has a long antecedence. This lies in his determination, when he took over as editor of The Sunday Times in 1983, to destroy what he called its “liberal-left collectivist consensus” and to turn the paper into a proselytiser for market populism.

Battle with what Neil then called the “chattering classes” was first joined in an editorial on 20 September 1987. Headed ‘Britain’s Breed Apart’, it complained that:

“Britain’s intelligentsia has become the lost tribe of the 1980s. As it wanders aimlessly between Islington and the Groucho Club, stopping now and then at Channel 4 or Broadcasting House to let the world know how much it despises what is happening to the country, it has become increasingly divorced from the land it lives in. It hates everything the Thatcher government stands for, but realises that the nation is not listening. So it has retreated to its own left-wing laager, where erudite moaning is taken for wise critique… Rarely have the ideals of the country’s intellectual elite been so out of kilter with the aspirations of plain folk.”

This led Neal Ascherson in an article in the Observer, 27 September 1987, headlined ‘The Spreading Slime of Imbecility’ to identify the sentiments expressed by Neil’s paper as “populist imbecility nourished on the porridge of resentful prejudice”.

A further salvo in this battle was launched on 10 January 1988 after Neil had commissioned Norman Stone, Professor of Modern History at Oxford, to write an attack on a number of recent British films which, in his view, “had nothing to offer an overwhelming majority of the potential audience. They represent at best a tiny part of modern England”.

According to Stone, their “visual world has been dominated by a left wing orthodoxy: the done thing is to run down Mrs Thatcher, to assume that capitalism is parasitism, that the established order in this country is imperialist, racist, profiteering, oppressive to women and other [sic] minorities”. This spectacularly ill-informed diatribe was given space to luxuriate over the whole of the cover page of the ‘Arts and Leisure’ section, and part of the next page as well.

The parallels between Neil’s earlier maledictions on the ‘chattering classes’ and his current excoriations of ‘woke’ broadcast news are obvious enough. But what is particularly disturbing is the distinct similarity between what I described in The Listener, 10 January 1988, as Brian Walden’s “nauseating apologia for tabloid McCarthyism” and the recent revelation in Byline Times that Cole had stated that GB News would launch “critical campaigns” and “special enquiries [sic]” in order to “expose those who act in the worst interests of the UK”. Who is he referring to? Russian agents? Terrorists? Not at all. Instead, the targets would be “certain MPs, members of the Lords and civil servants who acted against the UK and in favour of a foreign entity [sic] during the Brexit years”.

Of course, given the sources of its funding, GB News is itself in many respects a foreign entity (unlike the EU when the UK was a member of it), and such campaigns and “enquiries” would be quite impossible under current Ofcom regulations.

However, the very fact that such a claim could even be made, taken together with the views of those discussed in this article, strongly suggests that those behind GB News see it as primarily a political force, and that Neil in particular intends to introduce into broadcasting as a whole the same kind of values that transformed The Sunday Times into not simply a vehicle for market populism but a potent model for print journalism in the market populist mould.