Putin’s PurgesA ‘Frontal Attack’ on Navalny and his Allies

Alexei Navalny, a Russian opposition leader, lawyer, and anti-corruption blogger, is serving a two-and-a-half-year term for failing to appear in person at a parole hearing. Navalny was in a coma in a German hospital after a poisoning attempt last year and thus allegedly violated the probation terms of his suspended sentence. He has been in prison 60 miles east of Moscow for 86 days and has been on hunger strike for 15 days.

According to his wife and attorneys, Navalny speaks with difficulty, complains of severe pain and numbness in his back and limbs and now weighs only 76 kg. The penal colony’s administration refuses to admit him to the hospital or allow a personal doctor to visit. Instead, the administration threatens to start force-feeding him.

On 6 April, three doctors from the Russian Doctors’ Alliance who came to provide medical care to Navalny were detained by the police. For this attempt, Anastasia Vasilyeva, the head of the Alliance of Doctors, was fined 180,000 rubles ($2,338).

Navalny’s wife, Yulia, was allowed a visit during which she could communicate with Navalny by phone through a glass wall. After the meeting, the district police officer told Yulia that she would be monitored as she was considered “prone to committing administrative offenses.”

Prosecuting relatives is Putin’s apparatus way of silencing the opposition. On 29 March, 2020, in Rostov-on-Don, the father of the director of the Anti-Corruption Foundation, Igor Zhdanov, was arrested on a fabricated case, transported to the northern region of Russia, and at the moment his whereabouts are unknown.

Today, Lyubov Sobol (pictured above), a lawyer for Navalny’s Anti-Corruption Foundation (FBK) was sentenced to one year of community services for entering the apartment of an FSB officer suspected of Navalny’s poisoning. The officer, Konstantin Kudryavtsev, confirmed that he made an attempt to poison the opposition leader in his telephone conversation with Navalny. On 21 December, 2020, Sobol tried to record Kudryvtsev’s voice to present the recording as evidence. To do so, Sobol entered the apartment with a pizza delivery man. Sobol recently announced her plans to run in the 2021 State Duma elections.

A Catalogue of Intimidation and Arrests

Despite arrests, searches, threats, and vandalism, Navalny’s FBK centres throughout Russia continue to expose the corruption of Putin’s Government and organise an all-Russian action demanding freedom for Navalny. In response, the authorities are stepping up suppression measures– targeting the coordinators who announced their participation in the elections in September 2021, according to Leonid Volkov, head of the Navalny regional centres network.

On 13 April, the day after the opening of the Navalny centre in Makhachkala, its coordinators disappeared and went missing for two days. Later it turned out that they had been arrested. The police searched Navalny’s centre in Voronezh, confiscated all printed materials, and detained the head and a staff member. The Murmansk centre was vandalised, painted with a swastika, and the office equipment was damaged. In Nizhny Novgorod, the deputy governor forced the landlord to terminate the rent agreement with Navalny centre, and the police seized the property from the office. 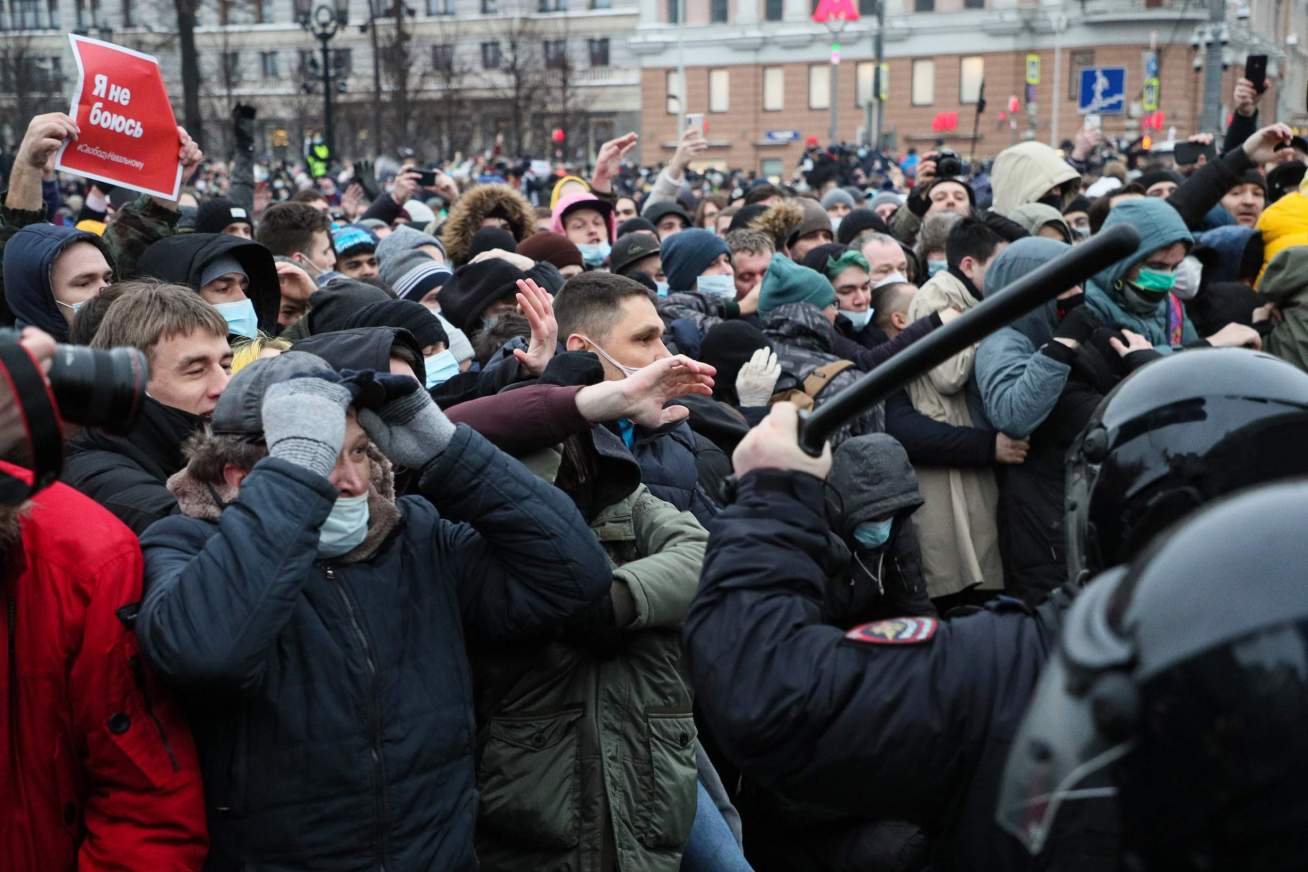 Special Report“Putin is a Thief” The Russian People Rise Up

On 14 April, the head of Navalny centre in St. Petersburg was arrested for 10 days, allegedly for organising a protest via social networks. In Ufa, the authorities seized 4,000 leaflets, and the Navalny centre’s volunteer was detained. In Krasnodar, police detained three employees of the Navalny centre.

To suppress protest sentiments and intimidate people, the Russian authorities have also started an attack on journalists.

On 9 April, Roman Anin, one of the country’s leading investigative journalists and editor-in-chief of the independent investigative media outlet iStories, known for his investigations into organised crime and corruption in Russia, was subjected to a night raid, interrogation, and a seizure of property. Anin investigated the FSB’s involvement in putting pressure on Navalny centre employees.

On 14 April, police also searched the editorial office and apartments of journalists and parents of journalists of the student publication DOXA in Moscow. Four editors were charged with involving minors in committing illegal actions on the internet by posting a video message ahead of the 23 January protest against the arrest of Navalny.

Amnesty International considers these actions as a “frontal attack” on journalists and freedom of speech in the country. The European Union also expressed concern about the recent raid, brief detention, and interrogation of Roman Anin.

As suppression escalates, Russian people need the support of the international community.