The Government has warned firms about fuelling human rights violations in China, despite itself purchasing face masks from a firm that likely uses Uyghur forced labour

The UK has launched a new website warning businesses about the ethical risks of trading with China, just days after it was revealed that face masks – made by Uyghur Muslims most likely under forced labour conditions – were procured by the Government.

Late last week, the Government released the new website, highlighting the pitfalls of trading with China – particular for digital and technology firms.

The website notes that normal due diligence checks are not sufficient in the case of Chinese partners; firms that might be considered as trading associates. Public and corporate records are limited in China, the site says, and extra searches should be conducted to “detect any issues of concern such as court cases, bribery allegations, or unexpected commercial or political ties.”

Expanding further, the Government guidance warns that collaborating with China may fuel human rights violations in the country. “There is a risk that your company’s technology could be used to violate human rights, posing a significant risk to your business’s reputation,” the site states.

Of particular concern, the Government says, is the “mass surveillance, profiling and repression of ethnic minorities in Xinjiang,” home to a large population of Uyghur Muslims. Indeed, in recent years, the Chinese state has engaged in a systematic persecution of Uyghurs, detaining a million or more in nearly 400 internment camps, and imposing a regime of cultural and religious indoctrination.

“Where China is not meeting its obligations under international law and falls below the standards required and expected of responsible governments and nation states, the UK Government will continue to speak out publicly,” the new website reads.

However, it seems the Government is falling foul of its own policies. Last week, Byline Times revealed the UK has bought goods produced by a Chinese firm that uses Uyghur Muslim labour in its factory. According to The New York Times, 25% of the workforce used by Medwell Medical Products in Fenglin Town, Jiangxi Province, are Uyghur Muslims.

The Uyghurs are forced to attend three Mandarin classes a week, are housed in separate quarters, and are surrounded by Communist Party propaganda, The New York Times found. This has the hallmarks of a forced factory labour programme deployed by the Chinese state, called “Xinjiang aid”. When The New York Times contacted Medwell, an employee claimed that no Uyghurs worked for Medwell. 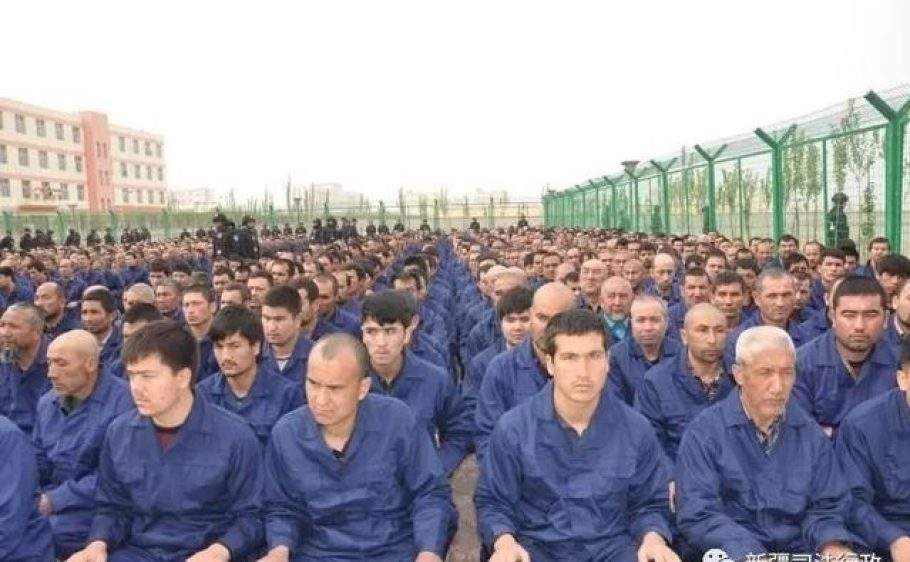 Despite these apparent human rights violations, however, it appears as though the Government has purchased masks manufactured at the Medwell facility. A written Parliamentary question from Lord David Alton in October forced the Government to concede that Medwell face masks had been procured.

The Government has consistently maintained that it has no oversight over sub-contractors used by private sector firms to deliver public services. However, the Department of Health and Social Care told Byline Times that, “We expect all suppliers to the NHS to follow the highest legal and ethical standards and proper due diligence is carried out for all Government contracts.”

Additionally, the UK officials have conducted a number of meetings with Chinese firms and the Government in recent months, in an attempt to drum up investment. Department of International Trade records show that, between April and June this year, ministers held meetings with the China Construction Bank, Alibaba Group, the China-Britain Business Council, the Bank of China and the Shanghai Stock Exchange to discuss “investment post-COVID-19”.

Of course, there is no suggestion that any of these firms have been directly involved in human rights violations. However, it is worth questioning whether the UK Government will be inclined to stand up to China, as Brexit necessitates a closer economic partnership between the two countries.

Ultimately, firms looking to trade with China may be perplexed at the Government’s warnings about due diligence checks, when its own procurement process managed to deliver masks likely manufactured by forced Uyghur labour. Leading by example is certainly not a forté of the Boris Johnson administration.

Sam Bright, 27 November 2020
The Conservative MP’s taxpayer-funded second property is seemingly rented for twice as much as the average UK wage

Dispelling Disinformation: If COVID-19 Doesn’t Kill the Young and Fit, Why Can’t We Just Ignore It?