Following COVID-19 denial demonstrations in the UK, US and Europe, CJ Werleman explores the driving force behind such movements and what they mean for democracy

An eye-popping 56% of Republican Party voters believe that President Donald Trump is defending the planet from a secret cabal of Satan-worshipping paedophiles and cannibals – mainly comprising ‘deep state’ Government officials, Hollywood celebrities and liberal elites – who are running a child sex-trafficking ring, according to a DailyKos/Civiqs poll published last week.

Otherwise known as the ‘QAnon’ conspiracy, a mere 13% of right-wing voters believe it to be wholly untrue and it is fast becoming a central pillar of conservative politics – with Trump giving it oxygen and credibility by saying that “these people love our country” and that “they love me very much”.

Despite the fact the FBI has identified QAnon conspiracy theorists as “extremists” who pose a potential domestic terrorism threat, several adherents are on the way to becoming elected Republican Party congresspeople, including Marjorie Taylor Greene, who posted an image on Instagram of her holding a semi-automatic weapon, pointed threateningly towards the respective photos of the country’s first black Muslim congresswoman, first elected Somali refugee to Congress, and a Hispanic American law-maker.

More worrying still is that QAnon now has millions of members and followers on Facebook, with membership growing by more than 600% since the arrival of the COVID-19 pandemic, according to the Wall Street Journal. They are based in a dozen Western democratic countries, including the UK, with myths about the Coronavirus merging with QAnon. 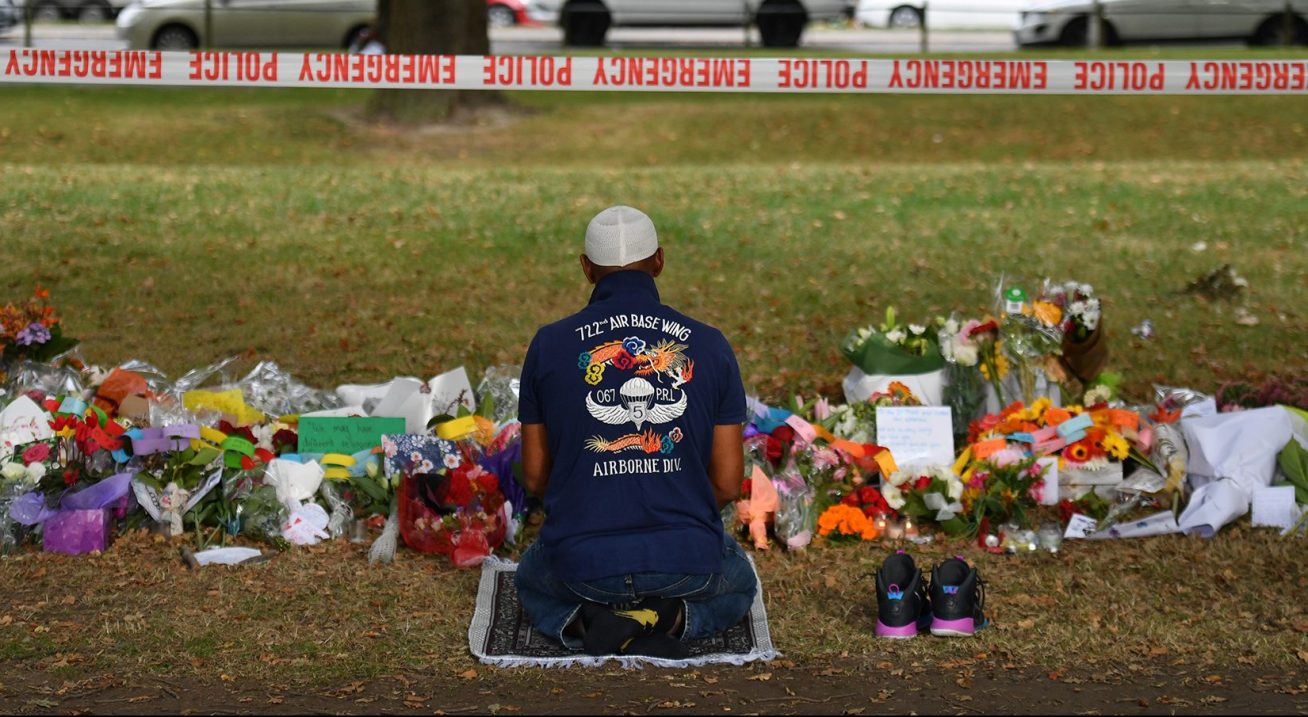 It goes without saying that, were Greene a Muslim and pointing an assault rifle towards a group of white Christian conservatives, the incident would be under investigation for the incitement of terrorism.

During recent COVID-19 denial protests in London, QAnon banners and posters were spotted among the crowd, with BBC News receiving a number of emails that demonstrate a merger between the QAnon and COVID-19 conspiracies.

“Coronavirus is a cover-up for… child sex trafficking – a major issue in this world and nobody wants to report about it,” read one email.

In many ways, QAnon has become a one-stop-shop for right-wing extremists, anti-vaxxers, 5G conspiracy theorists, 9/11 truthers, and anyone else seeking a simple reading of a complex world.

“In the face of the pandemic, conspiracy theories paint a world that is ordered, and controllable,” Jovan Byford, a psychologist with the Open University, told BBC News. “Conspiracy theories flourish when social machinery breaks down and available ways of making sense of the world prove inadequate for what is going on.”

But we need to stop thinking of QAnon conspiracy theorists as a group of harmless social media accounts – because they not only threaten democracy and risk exacerbating a deadly pandemic, but they also promise to unleash the next wave of international terrorism.

In an interview published in the counter-terrorism journal CTC Sentinel, Giles de Kerchove, the European Union’s counter-terrorism coordinator, expressed concern about the “potential future rise of new forms of terrorism, rooted in conspiracy theories and technophobia”.

“We have already seen small-scale acts of violence caused by a belief in conspiracy theories – for example, against telecom masts – and given the amount of disinformation online, we could see more serious examples of this in the future,” he said.

“It is like junk food,” he added. “It is not by coincidence that junk food is full of salt to keep you coming back. It is the same with the internet; they bring stuff that is exciting and interesting and will draw you in. If you are interested in violent, hateful speeches, you will get more of the same and often more and more extremist content.”

Earlier this year, Sara Khan, who leads the UK Government’s Commission for Countering Extremism, warned that conspiracy theories must be taken seriously to avoid “serious consequences” including violence and terrorism.

It would appear that conspiracy theories hold the potential to unleash what would be the sixth wave of international terrorism.

Professor David C. Rapoport, an internationally acclaimed terrorism scholar, identified the ‘Four Waves of Modern Terrorism‘. In the early 1900s, this was from anarchists. After the Second World War, it was anti-colonialism. In the 1970s, it was the New Left, which was followed by the era of religious extremism from 1979 to the 9/11 attacks in 2001.

Essentially, Rapoport was articulating how terrorism threats exist within their respective life cycles, spurred on by global socio-economic-political realities. For instance, he cites the cataclysmic political events in the Middle East during the late 1970s, alongside the negative consequences of globalisation, in the rise of global violent “jihadist” movements.

If Rappaport was to update his thesis today, it would include the current global right-wing extremist and/or white nationalist terrorism crisis as the fifth wave. A sixth could likely take shape in the form of the disinformation espoused by conspiracy theorist groups such as QAnon.

Most violent extremist movements are rooted in a conspiracy theory constructed in an ‘in’ group versus ‘out’ group logic. ISIS recruits espouse conspiracies about a “Crusader-Zionist alliance” controlling the world. White nationalists espouse the “Great Replacement” conspiracy, which holds that white Europeans are being replaced by non-white immigrants.

It is hard to see how US democracy can function when a significant portion of supporters of one of the country’s two major parties believe that the current occupant of the White House is “Making America Great Again” by slaying Satan worshippers and cannibals.