Stephen Unwin’s 23-year-old son Joey has severe learning disabilities and intractable epilepsy. He lives in supported living in Bishop’s Stortford, as part of the St Elizabeth’s Centre in Hertfordshire. Joey is non-verbal with some physical frailties. Because of COVID-19, Stephen and his family haven’t been able to see him face-to-face since early March. This is his account of their reunion.

Yesterday, we saw Joey for the first time since early March.

We had to book the session in advance and were told that we would have an hour-and-a-half and that there should be no physical contact. When we arrived at the St Elizabeth Centre at 11 am, there was a little tent with gloves and masks and cleaning equipment which we approached tentatively.

And suddenly there was my Joey getting out of the car that had brought him from his supported living.

I called his name and he smiled shyly, cheekily, distinctively and we wandered over to see him, as the table and chairs were carefully wiped down from the last family visitor by one of his lovely carers, Clare Thackeray.

Joey has an amazing ability to accept things without getting upset. As he opened up the bag of goodies that his stepmum Ginny had bought for him – his usual favourites: waffles, diet Coke, crisps, Jaffa Cakes and, the best of all, sliced processed cheese – we all started to relax.

We were obediently wearing our PPE (masks and gloves) and as my friend, the extraordinary photo-journalist Edmond Terakopian, started taking pictures, we joked and smiled and felt so happy to be back with Joey again after all these months.

But we couldn’t touch him. Noli me tangere (‘don’t touch me’), the resurrected Christ says to Mary Magdalene. I kept remembering the phrase.

Because, you see, Joey has no speech and communication has to take other forms: simple Makaton, smiles and giggles, one-way talking, and glances and eyes and gestures but, above all, in normal circumstances, physical contact: an arm round, a cuddle, a tickle, a squeeze, sometimes even a comic push – these are all how Joey communicates and we all know what to do. I don’t think I’ve ever known such a strong urge to hug anyone as I did then. 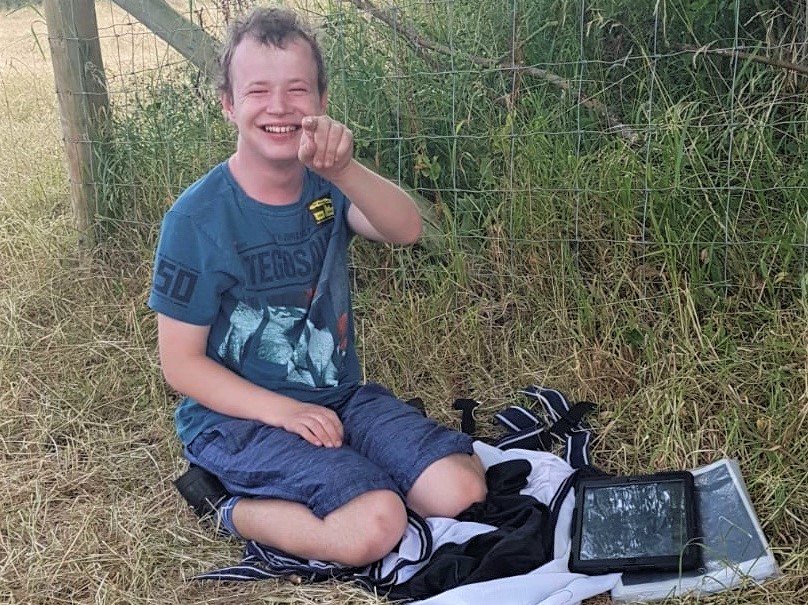 Soon, Joey got restless and we followed him over to the willow tree where he and his sister started pulling on the boughs, Bea hanging upside down, Joey tugging and breaking off branches and inspecting them ever so carefully, displaying them like a fish caught on a line.

Then we headed off to the apple orchard – one of Joey’s blissful places as the apple juice is beyond compare – where the grass is tall and the sun always shine, in a comical procession of Edmond walking backwards up the path really fast trying to focus his Leica, Joey pushing ahead, the three of us trailing behind, up past the apple trees to the little cemetery with the carved crucifix where the nuns and some of the residents have their final resting place.

It started to drizzle steadily and we picked our way back through the orchard to the tent. Joey and I sat beside each other and I put my feet up on his lap and we talked (no words, but lots of communication) about how his mum and his big brother, Laurie, had visited him the previous weekend and he told me how much he had liked seeing them.

We talked about Monsters Inc and The Jungle Book and Joey covered his ears when the rain on the canvas started to rumble. We did high-fives with my carefully gloved hands and I remembered, as I do so often with Joey, that the old jokes are the best.

Soon Joey decided he wanted to go to another willow tree and Ginny gave Bea an umbrella which she shared with him and the two of them headed off across the lawn laughing in the rain. ‘That’s the shot,’ I called out but Edmond had already caught it brilliantly. The love is palpable, and it’s the definition of inclusion.

Finally, the time came for us to leave.

Clare came back with the car and Joey got into the back and calmly put on his seat belt. We waved our goodbyes and walked back to our car. As I turned my back on him, I was overwhelmed by great rushing gulps of emotion – by my love for him and by all of us being together with him again after all this time.

I’ll admit, glancing at my phone, I was touched by the dozens of people who had so quickly responded to a tweet I posted earlier of Joey smiling and laughing as he pulled on that poor willow tree.

I was struck by the utter strangeness of the whole situation, but there was something else too: the meticulous care, the lightest of touches, the elegance with which St Elizabeth’s had managed this most personal of moments. We weren’t policed but we knew, as I’m sure did all the other visitors, that there are bigger things than our temporary frustrations, that the health of the residents and the staff at St Elizabeth’s is more important than my desperate, yearning desire to squeeze Joey tight and not let him go.

I’m an absurdly tactile person and this whole thing went against my deepest instincts. But it showed me again that some things are more important than instinct and I only wish our leaders, their advisors, and so many of our fellow citizens, realised this too.

As so often – to my mind, at least – Joey and his world reveals the truth.

Nathan O'Hagan, 20 May 2022
Nathan O'Hagan explores what the 17-year-old Blackpool player's bravery in coming out publicly as gay will mean for other footballers and the game itself 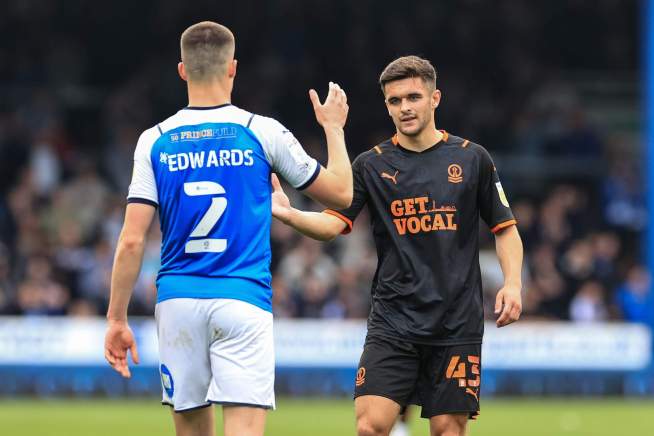 The Upside Down: We Won’t Bow Down – What I Learned in New Orleans 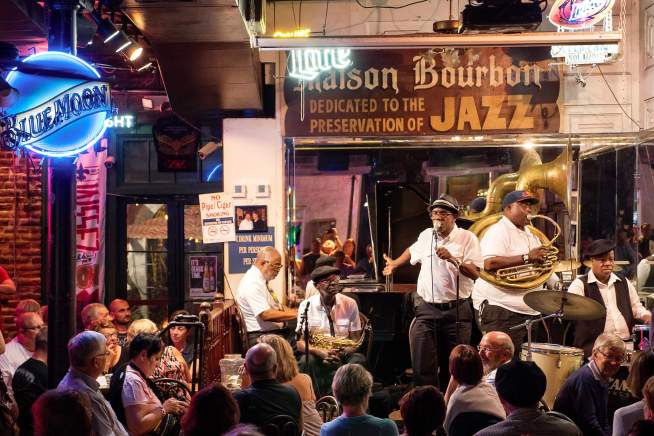