Whilst most of the UK has understandably been distracted by COVID-19, work on HS2 – one of the largest deforestation projects this country has seen since World War Two – has continued unabated.

Over the past two months, 4.7 hectares of Crackley and Broadwells woodlands – both ancient remnants of Warwickshire’s famous Forest of Arden – has been felled at a time when nesting birds, breeding bats and newly-born badger cubs are most prone to disturbance.

Despite HS2 refusing all of Byline Times‘ requests for information regarding nesting birds, a worrying timeline has emerged which throws doubt on its claim that “an ecologist is present during all tree clearance work in order to spot nesting birds and stop work where necessary”.

It transpires that HS2’s ecologists did not record any nesting birds in either woodland before 15 April – a full 11 days after felling started at Crackley Wood and eight days after chainsaws were seen entering Broadwells Wood.

According to a Freedom of Information (FOI) request seen by Byline Times, a total of 93 nests were recorded at Crackley Wood and Broadwells Wood between 15 April and 5 May. Out of the 22 species reported, the most frequent breeding bird was the blue tit with 22 nests, closely followed by wrens with 15. The list also included the marsh tit, thistle thrush and song thrush – which are all included on the UK’s red list of Birds of Conservation Concern – and a tawny owl, an amber-listed bird.

The tawny owl nest was one of 31 nests found by ecologists during the survey that took place on 15 April. Byline Times has been aware of the owl nest since 12 April when it was mentioned by a member of the HS2 security team in a conversation videoed by one of the ‘Stop HS2’ protestors.

It is an offence under the Wildlife and Countryside Act (1981) to kill, injure or take wild birds, or to damage their nests when in use. Best practice dictates that developments set up a minimum of a five metre disturbance exclusion around birds’ nest to buffer activities which might cause the adults to abandon the eggs or chicks. In the case of tawny owls, the zone extends to 100 metres. 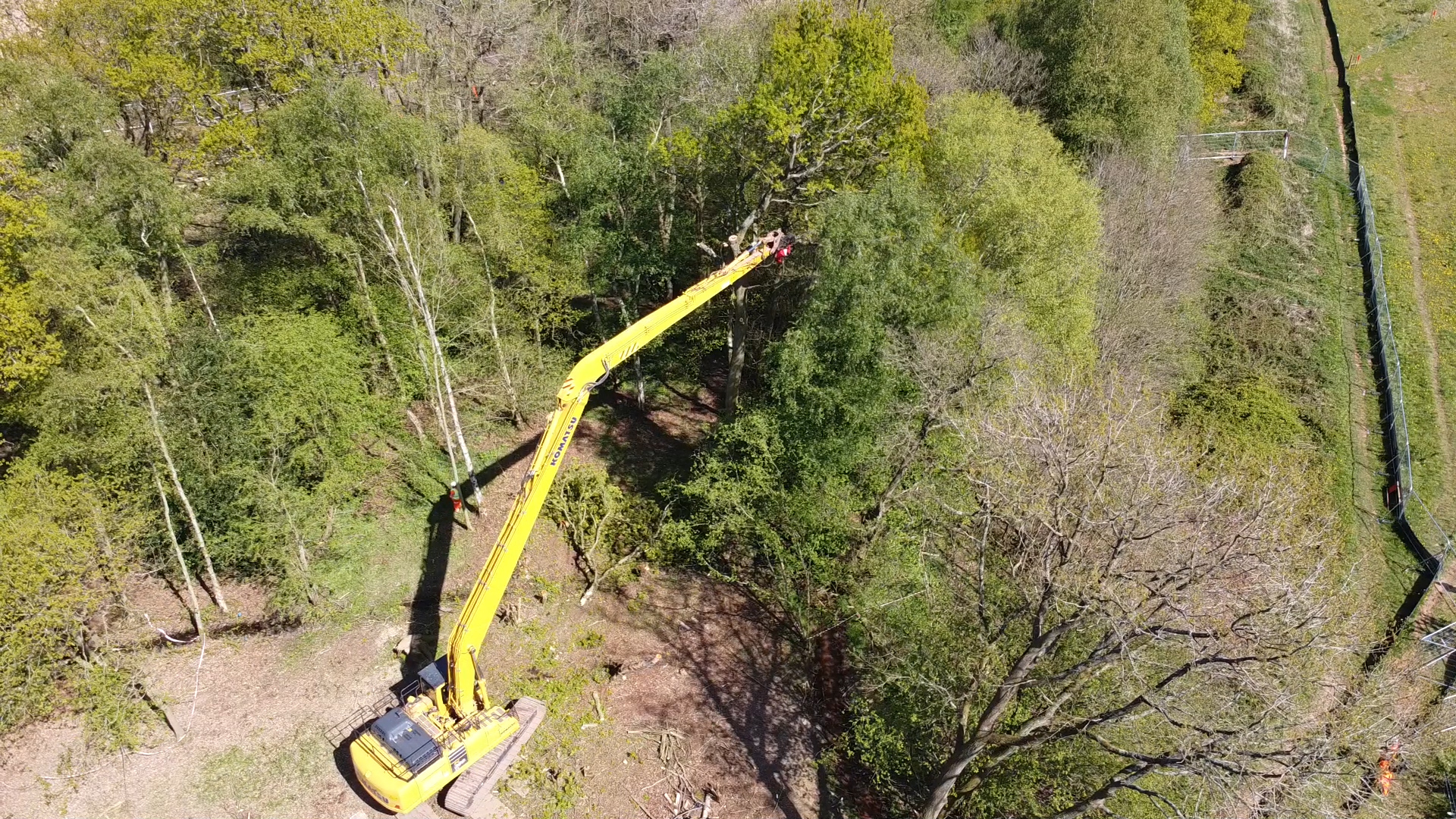 A 100 metre exclusion zone would make up to 86% of the area to be felled at Broadwells Wood out of bounds to HS2 contractors until sometime between July and September after the owl chicks have fledged and dispersed from the area. Tawny owl young often leave the nest site before they can fly, spending a few days on the ground before climbing on to branches in the surrounding trees. At that time, and for several weeks after, they are still reliant on their parents and susceptible to disturbance which is one of the reasons why such a relatively large exclusion zone for woodland development sites is recommended.

However, an anonymous source working for HS2 has alleged that ecologists working on the project were instructed to reduce the tawny exclusion zone for harvesting machinery to just 20 metres to allow felling to continue. The source claims that chainsaw operators were regularly seen working within just a few metres of several active birds’ nests including the tawny owl nest.

The reduction in the tawny owl disturbance exclusion zone was verified in a letter from HS2’s complaints team to a member of the public on 2 May, stating that “our enabling works contractor; LMJV, are aware of the tawny owl nest in Broadwells Wood as it was identified by their team of ecologists prior to any works commencing with the potential to cause disturbance”.

“A full exclusion zone in excess of 100 metres was immediately implemented, then gradually reduced with specific restrictions on types of machinery able to be used close to the nest to manage the potential for disturbance, following guidance from LMJV’s ecology team,” it said. “The nest and exclusion zones are closely monitored by ecologists and it is believed that the chicks are now approximately four weeks old and healthy.”

The allegation that disturbance exclusion zones were routinely disregarded by HS2 contractors appears to be supported by video evidence of a blue tit nest located on the edge of Crackley Wood that was initially missed by the HS2 ecologists.

The footage of the nest, discovered by members of the ‘Stop HS2′ protectors’ camp on 16 April, shows blue tits entering and leaving a rot hole at the base of a small tree a few feet from the fencing surrounding the wood.

When the site was visited by Byline Times on 21 April, hazard tape marking a disturbance exclusion zone was barely visible, having been trampled into the ground. The stumps of recently-felled trees were apparent within a few meters of the nest and a branch had fallen on to the nest from a nearby tree.

It is not known how many nests were missed by the ecologist or were abandoned due to disturbance. To date, HS2 has refused to confirm or deny that any of the tawny owl chicks have successfully fledged.

In a statement defending the organisation’s failure to answer queries about some of its environmental practices that appear to have fallen short of best practice, HS2 denied avoiding scrutiny saying it had “acted transparently and in-line with its obligations under the FOI Act’.

It added that it is “very happy to confirm that its ecology work is carried out in accordance with the law and to the highest standards”.