'Why Does Anyone Young
Want to Elect
Bernie Sanders
For President?'

Bonnie Greer remembers her Baby Boomer past and wonders what happened to a healthy disrespect for your elders.

Many of us, what you would call ‘three score and ten’ and even more, are still doing the business. And this is good. I can say this because I’m in that category.

Many of my friends – and this happened a lot in the world of culture – did not make it to this point; did not make it out of their forties because of AIDS, drugs, all the tragedies of the 1970s and 80s. If you did, you live with that and it is part of your story forever.

A friend of mine, now dancing around in her bovver boots and short skirt and safety pins in her ears, explained to me that she was having babies when Punk came around the first time. Her babies — now in their thirties — keep their counsel about mum’s ‘new look’. This is best. Because we cannot be stopped, we Baby Boomers. I’ve even done the Retro Punk thing a little bit, too, I must admit. I thought it was lame the first time around. So I get a do-over. Nice, huh?

Anyway, back when Punk first emerged, I was more New York “No New York”: austere, ‘smack’, ‘Low’, East/West Berlin/East Village thing. Punk just looked, well, too jolly. There were the ‘roubles then in Northern Ireland and the Recession in America. And also lots of coke, and smack.  If you were so inclined. Punk was an affectation.

We looked at those younger, but we never looked to our elders. Quite the contrary. We did not see them as anything other than the opposite of what we wanted to be. “Hope I die before I get old” Roger Daltrey sang. And we all meant it. But, voila!  we’re still here.

We are now Living in ‘American Psycho’

Many of us Baby Boomers are the fruit of the cradle-to-grave service of the NHS.  And free university.  And going back and forth to the Continent if we wanted to. This is not to make our youth sound glorious. It was not. It is just to say that we made a cut-off:  the Wise Elders, were just that. Our elders. We respectfully listened. Sometimes. But usually did the opposite.

Maybe that’s what you’re supposed to do when you’re young.  Maybe that’s what the definition of young is. But with many of the young no… it’s the opposite. This, to me,  is a bit worrying. For example, I ask myself the question: “Why does anyone young  want to elect Bernie Sanders President?”

First,  let me be up front. I have nothing against socialism. Everything else has been tried and not been successful for the poor and working class.  So why not give socialism a go?

Most Americans think that ‘socialism’ means communism, the fount of all evil. Communism in its purest form existed for about three weeks during the Paris Commune of 1871. The Commune put women at the heart of much of it, so no soul-searching about female leadership.  The women “manned” the cannon up at Montmartre. It was the women who held off the reactionary  forces of most of the rest of France, too.  But they were, for the most part, young and vigorous. The Parisians withstood a siege eating rats, the whole nine yards, because they had hope for the future. Because there was a  future. In their leaders.

And this, for me, is where Senator Bernie Sanders , Independent of Vermont and Democrat when he runs for President, comes in.

Let me say upfront: if Bernie is the Dem nominee for President I’ll be out there banging the drum like everyone else. But, come on, what future is it with a pre-Baby Boomer:  a guy older than Joe Biden?  Older than Trump. Older than even me?

Being President ages you.  Look at Obama. Young People: Bernie had a heart attack. If I was his wife, I would never let him near a campaign trail.  To some this all may sound ageist. And all Americans have the right, maybe even the duty, to stand up and be counted against Donald Trump, the hero of Patrick Bateman, the killer in “American Psycho.”

In some ways, Bernie is a kind of hero. He’s out there. But believe this:  Bernie ‘The Socialist’ is a gift to Trump. He is the candidate he dreams about. Because if Bernie Sanders wins the Democratic Party nomination for President, Christmas comes early for our current “Twitler”.

The Coronavirus Crisis: The Christian Right Becomes A Suicide Cult

The Coronavirus Crisis: The Government Must Go Much Further to Protect Workers and Business

Mike Buckley, 2 April 2020
Mike Buckley considers the disadvantages of the Government schemes announced to support the employed and self-employed and whether a universal basic income might be the way forward.
Filed under:
Argument CORONAVIRUS CRISIS Business Coronavirus Economics, Finance and Money Economy Public Health Society and Welfare UK Politics

The Coronavirus Crisis: Is the US Using COVID-19 to Topple Venezuela’s Leader?

Steve Shaw, 1 April 2020
Steve Shaw reports on the US Government's announcement of charges against President Nicolas Maduro for drug trafficking and questions the timing of such a move during the Coronavirus pandemic.
Filed under:
Argument Reportage CORONAVIRUS CRISIS Coronavirus Foreign Affairs Public Health United States of America US Politics Venezuela 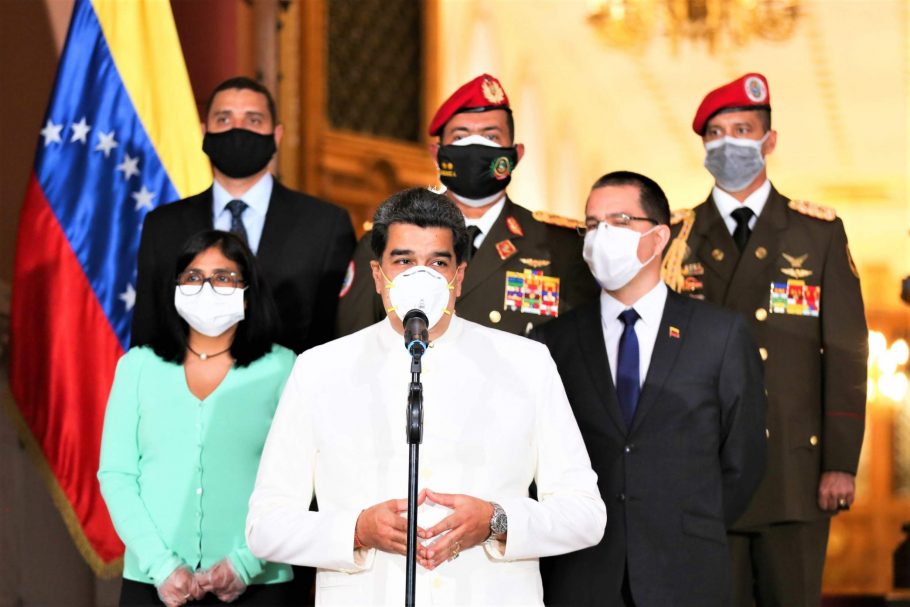