One Nation Conservatism is Dead: Johnson is Held Hostage by Hard Right Forces

Paddy Briggs argues than any hope that Boris Johnson will show a more liberal side underestimates the scale of the coup inside the Conservative Party.

Within a couple of days of the General Election Robert Colville, the Director of the Centre for Policy Studies think tank, popped up in The Times in an article headlined “Boris Johnson is serious about Tory transformation”. He claimed that Boris Johnson and co. are the “New Centre Ground” and that the new government “…will surprise people with its radicalism.”

In short, his claim is that Johnson and his Cabinet are inheritors of the “One Nation Conservatism” mantle.

The CPS is, of course, a Right Wing think tank with many of the usual suspects on its Board and as supporters. Maurice Saatchi is the Chairman and the Tories’ favourite businessman: Lord Bamford of JCB is on the Board. It was founded back in 1974 by Keith Joseph and Margaret Thatcher and as such it is proud of “…developing the bulk of the policy agenda that became known as Thatcherism.” Its current claim that it is an “…independent, non-partisan organisation” is preposterous. It is a pro-deregulation, pro-privatisation, low-tax, libertarian, anti-Europe pressure group and a regular presence at Conservative conferences and other events.

He who pays the piper calls the tune and Johnson owes his position not to ‘One Nation Conservatives’ (who he drove out of the Party) but to the hard Right — the ERG and their fellow travellers and the CPS, Bruges Group and others. And they will expect him to deliver. He will not deliver what the Right wants out of loyalty or conviction. His world is a loyalty-free zone — as wives, friends and colleagues can testify. And his principles are as flexible as Groucho Marx’s — if you don’t like his present ones he’s got plenty more. No. Johnson is where he is because the Tory Right Wing put him there, and he’s not going to blow it by opposing them.

In power Boris Johnson who will do what he’s told. His cabinet are not sycophants bowing to his every whim – he is the sycophant bowing to theirs. And it’s payback time.

An End to Moderation

Johnson is not a One Nation Tory – he is not driven by any ideology, his or anyone else’s, but by ambition and a longing for power. That longing for power is not to do things but to be things — primarily Prime Minister. That he has public appeal he has demonstrated — in a celebrity age he is one of the very few political celebs. And as we have just seen he is electable which is why he has long since been the pragmatic choice of the Conservative Right.

The post-Thatcher Hard Right was once a minority cult but it has always had its eyes on power, with Thatcher being the object of their worship. Not least because, as Nigel Lawson put in back in 1980, “The pursuit of moderation necessarily becomes self-defeating”.  The “moderate” Conservative leaders — from Edward Heath to John Major and David Cameron are the problem not the solution under this ideologically driven thesis.

Who’s Behind Boris Johnson’s Coup? The Murky Lobbyists Who’ve Taken Over the Government 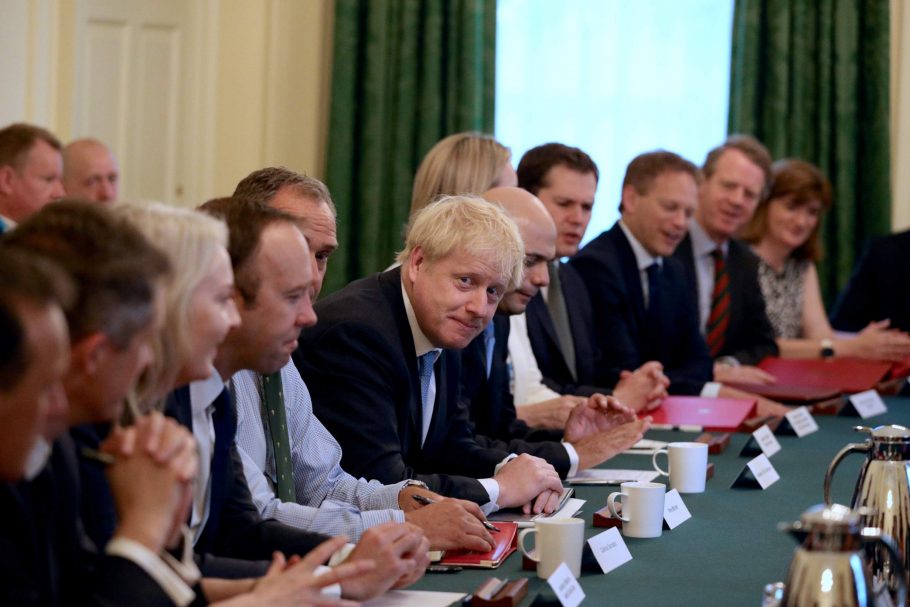 With funding from the likes of Lord Ashcroft and “intellectual” underpinning from the CPS, the Tax Payers Alliance (TPA) the  Institute of Economic Affairs (IEA) and Migration Watch (among others), a lively public debate forum in ConservativeHome and strong media support (Mail, Telegraph, Sun etc.) all the Right lacked was a charismatic leader.

This alliance felt that the Conservative Party had reached a nadir during the Coalition and they became viscerally Anti-Cameron and implicitly anti ‘One Nation Conservatism’.  They said that the Austerity did not go far enough and that there needed to be far greater deregulation — particularly in employment law (even the abandonment of the Minimum Wage) as well as extolling the virtues of unfettered capitalism and severely tightened immigration.

Johnson started to repay the Tory Right as soon as he took office by marginalising the One Nation Conservatives in Parliament. It was ruthless, but the Dominic Grieve tendency was despatched — there was no room for dissent any more. When Johnson claims that “we have to change our own Party” he certainly doesn’t mean changing so that the likes of Dominic Grieve, or Anna Soubry or Sarah Wollaston or Sam Gyimah would be welcomed back. The ERG took over and effectively culled their internal opposition.

This will be a Government led by libertarians and deregulators. The CPS and IEA will expect its favourite sons like Dominic Raab and Sajid Javid to deliver neo-Thatcherite foreign relations and economic agendas, as well as Brexit of course. Migration Watch has already had their reward and Ms Patel will continue to deliver. The CPS and the Tax Payers Alliance will expect a generous and high profile present – the decimation of the BBC and Privatisation of Channel 4 looks favourite. And foxes should certainly take cover in anticipation of the Countryside Alliance getting their booty.

Beware a Greek bearing gifts, and if Johnson approaches the centre-ground with a large wooden horse on wheels, batten down the hatches.

Patriotic Dissent will Take Down Trump

Sam Bright, 14 July 2020
It's almost impossible for someone from an under-privileged background to reach the ‘elite’ and acquire a platform. This is the real ‘cancel culture’ scandal, argues Sam Bright
Filed under:
Argument Class Identity Inequality Media Racism and Structural Inequality Rights Society and Welfare UK Politics

CJ Werleman, 14 July 2020
CJ Werleman explores the economic and social consequences of the US Government's mismanagement of the Coronavirus crisis for the next President
Filed under:
Argument Coronavirus Donald Trump Economics, Finance and Money Foreign Affairs Public Health United States of America US Politics