The award-winning investigative journalist who exposed the Cambridge Analytica scandal is being sued for defamation by Brexit-backing businessman Arron Banks.

London’s Royal Courts of Justice have been told that the award-winning journalist Carole Cadwalladr defamed Brexit backer Arron Banks during a speech in which she said “we know the Russian Government offered him money” during the 2016 EU Referendum.

The hearing, before Mr Justice Saini, heard that Banks had been offered a “gold and diamonds” deal at the Russian Embassy in the same week that he launched the Leave.EU campaign – a fact referenced by Cadwalladr in a Ted Talk.

He is also suing the journalist over two tweets which he claims seriously damaged his reputation.

Willam McCormack QC, representing Banks, argued that the remarks in Cadwalladr’s speech were not “off the cuff” and had “clearly been scripted”. He told the court that Cadwalladr “presented herself as a journalist” when she said “I’m not going into the lies by Arron Banks and the Russian Government”, saying that this accusation “went against common sense” and that, in a later tweet, she was “doubling down”. 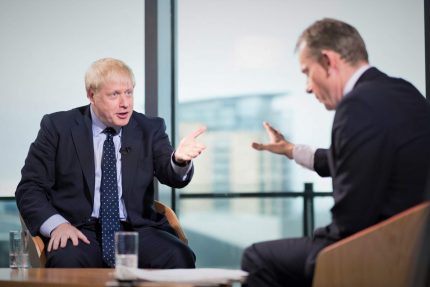 Responding for Cadwalladr, Gavin Millar QC argued that his client was merely stating that there were reasons to investigate the funding of the Brexit campaign, noting that her statement in full contained the phrase “there are reasonable grounds to suspect”. He also said that Leave.EU had been fined by the elections watchdog, the Electoral Commission, which had also referred the matter to the police.

“My client was opening a discussion not making a categorical statement of fact,” he said, adding that the sentence in question was about the Russian Government and its offer to Banks, which is not defamatory against him.

He concluded by arguing that Banks’ claim “verges on John le Carre… this is just a flight of fancy by Mr Banks and his lawyers”. He also suggested that the tweets in question were “clearly comment”, rather than statements of fact, and that any reasonable reader would have realised that.

Mr Justice Saini told the court he would adjourn to consider the meaning of the words used and would deliver his verdict next week.