A last-minute £58bn offer by the Labour Shadow Chancellor to women seeking compensation for lost pensions could be an electoral game-changer.

Some 3.8 million women born in the 1950s were pretty disappointed when Labour launched its manifesto last Thursday and gave only warm words and no cash offer to recompense their long-standing campaign for compensation for their lost pensions.

Boris Johnson must have been relieved by Labour’s stance. The next night he was challenged by voter and Waspi supporter May Rookes at the BBC leaders’ TV debate about compensating them. He told her:  “I cannot promise that I can magic up that money for you tonight.”

Yet, just 24 hours later, and just before the Conservative Party manifesto launch, Labour suddenly came out with a £58 billion five year plan to compensate the women.

Government tells 3.8 Million Women they had No Right to Know their Pensions were being Taken Away 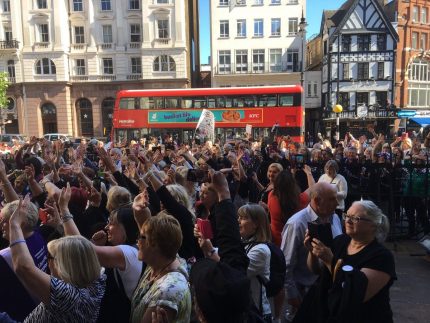 Sceptics who thought Labour had just produced a “knee jerk” reaction to assuage disappointment among the women were confounded. The plan is very detailed, down to the last penny of compensation for each person; how and when it is going to be paid, how much it would cost, whether it was taxable and who would qualify.

What Labour has done is effectively ambush the Tories and the Liberal Democrats by keeping the offer secret and luring them into thinking they did not have to make a counteroffer. They justify not publishing the details in the manifesto because they describe it as “compensation” – the sort of money any government would have to pay out if campaigners had won a court case.

They also justify it being outside the scope of the ‘Grey Book’ – their funding guide – because it will be funded by borrowing not taxation. The money will be borrowed over five years and some of the money would be recouped from the better-off in taxation. Payments vary from £400 to £31,300.

This could be a big game-changer at the general election with 3.8 million women affected and with spouses and families voting.

The driving force behind the offer is John McDonnell, the Shadow Chancellor. It is based on a completely different agenda to the one run by the All-Party Parliamentary Group on the same issue headed by Tory MP Tim Loughton and Labour MP Carolyn Harris which sought to tackle the problem with minimal cost.

A Labour spokesman said: “The discussions started before the 2017 election and continued after in the light of the commitment in the 2017 manifesto. John engaged with a wide range of groups, especially those that were working together.”

This discussion – which included a private fringe meeting that I attended at the last Labour conference – eventually concluded that a large sum had to be allocated to help solve the problem and it needed to be paid over five years to prevent unbalancing the books.

How will this play out?  It has attracted enormous interest but it is not full restitution which has been sought by campaigning groups BackTo60, Waspi Campaign2018 and We Paid In, You Paid Out.

It is welcomed by Waspi Ltd which did not expect so much, and two of the three campaigning groups for full restitution are also urging their supporters to vote Labour. BackTo60 is still pursuing its court case despite being defeated at the judicial review and sticking to its demand for full restitution.

This could be a big game-changer at the general election with 3.8 million women affected and with spouses and families voting. In total that could amount to 12 million people.

The early signs are is that it has caused a switch to Labour. From Labour marginals like Stroud to safer Tory seats people have been tweeting that they will now vote Labour. But other people are saying they will not change. Rather than offer any extra help to the women, both the Liberal Democrats and the Tories are urging people not to believe the offer.