Far Right Influence: Why ‘Tommy Robinson’ Endorsing Boris Johnson is Not as Surprising as You Think

What do Boris Johnson and far-right European ethno-nationalist groups such as Generation Identity have in common? An explicit endorsement from ‘Tommy Robinson’.

In fact, as Robinson’s endorsement of Johnson for next month’s General Election causes headlines and raises questions, it’s worth noting the surprising significance of the connection between the two.

As a producer for Robinson, I was privy to it all. The image of Tommy Robinson as the political outsider is popular, but far from accurate. He is actually more connected and has more influence than you might ever have thought.

In March 2018, I filmed a video for Tommy Robinson’s Youtube channel in which he interviewed Gerard Batten, the UKIP leader responsible for the party’s sudden lurch to the extreme right.

Over the next 18 months, Robinson and Batten would go on to repeatedly endorse one another, share stages and record multiple sit-down interviews many times. At the time of the interview, Batten had not yet completely destroyed what was left of UKIP’s status as a party once not dissimilar in standing from the Liberal Democrats.

Less than a year later, we were touring the House of Lords as the guests of a UKIP peer happy to use Robinson’s influence and reach to boost UKIP’s support base. He did as requested and endorsed UKIP emphatically.

That same year I was at a party with George Farmer, a Bullingdon Club member, the founder of Turning Point UK and the son of Conservative life peer Lord Michael Farmer. The party’s host? Paul Joseph Watson, the editor-at-large of the conspiracy theory mega-site Infowars.

The topic of conversation bounced between boastful insights into the content of private meetings between then Prime Minister Theresa May and Lord Farmer and congratulatory praise regarding the work we were doing with Robinson. I was at several of these parties.

This kind of praise and congratulation was not uncommon from well-connected and ‘respectable’ people.

In a pub across the street from the Belgravia house currently under the spotlight as the site of Prince Andrew’s alleged misdeeds, Bloomsbury-published author and noted intellectual Douglas Murray told me of his admiration for, and friendship with, Tommy Robinson. Like Lord Pearson and Lord Farmer, Murray talked disparagingly of Robinson’s more ‘naughty’ behaviour in the warmest way.

On another evening, Murray warned me about the danger of losing control of Robinson and allowing his campaign to become “unsightly” – this time in the same Chelsea pub where a well-known financier and friend handed me a card over drinks. It’s Nigel Farage’s card, he told me. He’d been watching closely and was impressed by our work.

It turns out we had known Farage’s PA for months as he was another regular attendee at the Battersea parties where George Farmer would boast about his, and his Daddy’s, connections. Daniel Jukes often told us that Farage was on the verge of saying something supportive about Robinson.

The sentiment was never made public but it was clear to me, behind the scenes, what Farage thought of our work re-branding Tommy Robinson when he came to dinner with us and our friends in Knightsbridge.

When Farage continued drinking with us later at the Grenadier in Belgravia, he even seemed to me to be chuckling along when we showed him a fiver with ‘Free Tommy’ scrawled on it pinned to the ceiling, a tradition in that pub.

While Tommy was with his family, we were out making connections, introductions, building support.

After his arrest and imprisonment, the leaders of several European far-right parties flew to London to protest. US Republican Congressman Paul Gosar, who had his speech for the event vetted by the US Senate itself, was there too. In fact, he was the headliner.

The same night, many of those politicians met Steve Bannon – who called Robinson “the backbone of Britain” – in a London hotel to discuss his ‘Movement’ organisation, which was once tied to Nigel Farage himself. That meeting is a pivotal moment in the 2019 documentary The Brink which follows Bannon and his assistant Raheem Kassam.

Kassam, also editor of Breitbart London, was one of the first to publicly endorse Tommy Robinson, as well as arranging a meeting between Farage and I in a Washington hotel to film a promo for the Robinson-fronted ‘Day for Freedom’ rally in Whitehall.

Of course, Farage, Bannon and Kassam all have their direct links to US President Donald Trump. Robinson himself had several Congressmen supporting his application to visit America to give a speech at Congress.

Bannon has links to our Prime Minister, bragging in The Brink that he had been advising Johnson on the content of his speeches attacking Theresa May. It’s believable, given the number of connections and shared contacts these people have, particularly so given Johnson’s digital strategist was found to have ‘liked’ tweets from one-time UKIP leadership hopeful Anne Marie Waters, who co-founded the anti-Islam street protest group Pegida UK alongside Robinson. George Farmer’s wife Candace Owens is a major right-wing voice in the US, even receiving praise from Trump, Bannon and Kanye West.

It’s a complex web of acquaintances and associations, parties and salons.

These connections are far-reaching and were forged at parties overlooking Battersea Park, over drinks on the terrace of my Chelsea apartment, at fundraisers, functions and protests, from the finest hotels to the most chaotic street rallies.

But, make no mistake, these connections exist. They are as real as they are invisible to the vast majority of us. So, when you see ‘Tommy Robinson’ endorse Boris Johnson, remember that the two of them are not as distant, not as unfamiliar, not as unconnected as you might think. None of them are.

More stories filed under 'Tommy Robinson': The Making of a Martyr

Henry Dyer, 3 September 2020
Henry Dyer reports on a defamation case against the Brexit campaign group and how allegations of child sexual abuse have been weaponised by the right 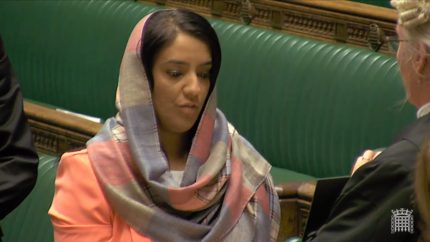 Caolan Robertson, 27 July 2020
Their reaction to the assault on left-wing commentator Owen Jones proves that many far-right-wing commentators secretly approve of silencing those who oppose them 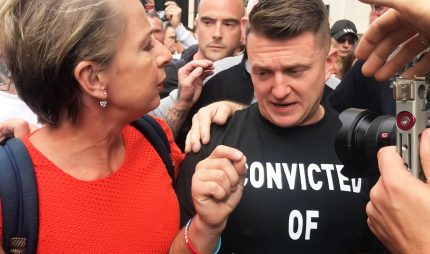 Statue Battles: The Counter-Protestors at War with Themselves 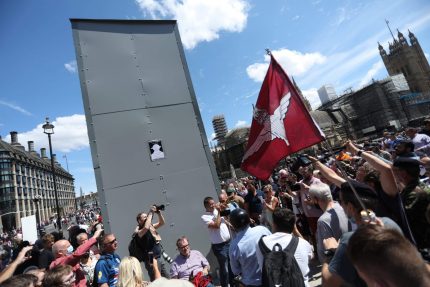