The former BBC reporter speaks to Nicola Driscoll-Davies about his new book exploring the assassination of Malta’s Daphne Caruana Galizia.

“In the Western world today, because of Donald Trump’s poison and because of the rise in populism, my fear is that it is possible that, if you write something that power doesn’t like, you could get bumped off, and this is new.”

These are the words of investigative reporter and former BBC journalist John Sweeney, who has co-authored a new book – Murder on the Malta Express: Who Killed Daphne Caruana Galizia? – out today.

Sweeney wrote the book with Carlo Bonini, an Italian journalist and editor of la Repubblica who has spent 25 years investigating organised crime in Italy and internationally, and Maltese investigative reporter and blogger Manuel Delia.

The book was turned down by every major publisher in the UK and the US due to fears of legal repercussions and costs, but the authors found two small publishers to release the book. 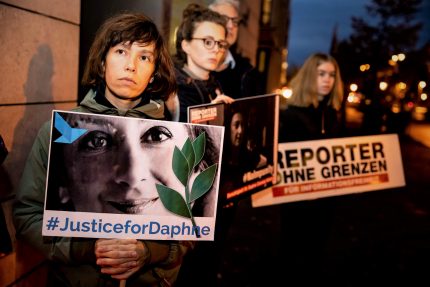 Sweeney told Byline Times that Daphne Caruana Galizia, who had been investigating corruption in Malta for a number of years and was murdered in a car bomb in 2017, was driven by pursuit of the truth.

“If we are judged by the nature of our enemies, then Daphne should be remembered as a hero of our time,” he said. “We are truth-tellers. Mistakes can be made, but it is an honest job to tell truth to power… it feels as though it’s become more dangerous across the Western world to be a journalist now.”

The assassinations of both Caruana Galizia and Jamal Khashoggi, who was murdered in Turkey last year, were “two horrible killings which threaten free speech, democracy and the rule of law and not just in Saudi Arabia or Malta but internationally,” he added.

He said Khashoggi’s brutal killing – which took place in the Consulate of Saudi Arabia in Turkey – was “absolutely chilling”. “It was the first moment I think for me in my entire career when I felt, as an investigative journalist, watch your step,” Sweeney said.

‘Malta is Not a Normal Country Right Now’ 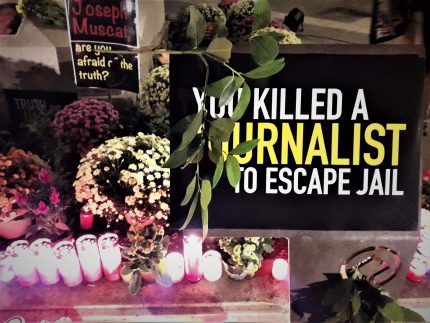 The book tells the story of Caruana Galizia’s work in Malta, referencing her reports and the events leading up to her murder. Asked why he felt compelled to write the book, Sweeney said: “If you murder a journalist in this way then don’t think for a second you are going to get away with it. That is not happening. When you murder a journalist like Daphne Caruana Galizia, it is a brutal nasty kind of censorship but what it does is that everybody who is left and is still living thinks about what they can write and what they can say and that’s hard.

“They didn’t silence Daphne with libel suits. But they killed her with a car bomb. So, any normal and great journalist who lives in Malta knows that if you investigate corruption, as Daphne did, you might possibly end up dead.”

Threat and paranoia is part of daily life in Malta today. Having visited the country, I have experienced the extreme kindness of the Maltese people. But, once it becomes known that you are a journalist, the atmosphere immediately changes. Beside the memorial to Caruana Galizia, men sit on benches shouting insults at reporters and taking photographs. When my flight was delayed at Malta’s airport, I became aware of a group of airport staff on a break, pointing at me. The only words I could understand were “journalist” and “Daphne Caruana”.

This is only a hint of the daily situation which Maltese journalists, politicians and anti-corruption activists have to endure. Read John Sweeney’s book to find out much more.

Nicola Driscoll-Davies, 27 January 2020
In an exclusive interview with Byline Times, Malta's former Justice Minister Owen Bonnici reveals how he believes the country is responding with changes to international criticism over its handling of the murder of its most famous journalist.

UPDATE JUSTICE FOR DAPHNE: The Net Closes on the Maltese Government

Nicola Driscoll-Davies, 20 November 2019
Yorgen Fenech owns the company 17 Black Limited, which the reporter killed in a car bomb in 2017 was investigating.