Insurgency general election campaigns almost invariably succeed on their first attempt, observes Jake Lynch. But there is one example the Labour leader could hope to emulate.

There’s a good reason why the organisation within Labour set up to support Jeremy Corbyn is called Momentum. Insurgent Opposition leaders change politics, first by capturing their own party, then by riding the same wave of impetus all the way to Downing Street. But they almost invariably do it first time.

Margaret Thatcher became the first woman to lead a major British political party in 1975. Four years of elocution lessons to lower her voice, coupled with an apparent meltdown in the economic management of the Callaghan Government, successfully positioned her as Prime Minister-in-waiting. Tony Blair elbowed aside his then-friend and rival, Gordon Brown, after Labour leader John Smith died suddenly in 1994. He used his authority in the party to set about the invention of New Labour, leading to the landslide three years later. And David Cameron drove a husky-pulled sled into Number 10 as a modernising Conservative, in coalition with the Lib Dems from 2010.

Harold Wilson’s vision of a modern Britain powered by the white heat of technology burnt off the Tories in 1964 after “13 wasted years”. By then, he had been Labour leader for just 18 months, after Hugh Gaitskell, too, died in office. Looking further back, Ramsay Macdonald for Labour, the Conservative Bonar Law, and even Gladstone, in the Liberal victory of 1868, all trod a similar route.

How the Brexiteers Warped Margaret Thatcher’s Idea of Europe 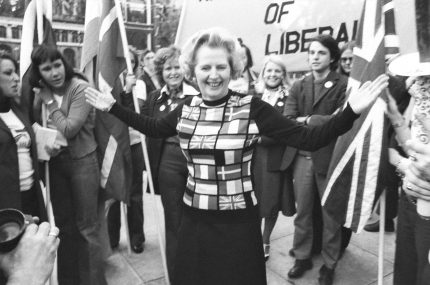 Lose an election, however, and the magic is dispelled. Labour, stuck with Neil Kinnock after a highly personalised campaign – coordinated by communications chief Peter Mandelson – was seen to have cut through, albeit in defeat as the SDP/Liberal Alliance split the vote in 1987. “One more heave” would eject Thatcher from office, it was said. Only for the Tories to do the job themselves, ditch the poll tax and bring in John Major, who went on to achieve the party’s highest ever popular vote.

Plenty have come back in as Prime Minister, after an enforced switch to the other side of the House: Wilson himself, in 1974, and Churchill in 1951. The Victorian era saw the office ping back and forth like a shuttlecock between the likes of Gladstone and Disraeli.

But Corbyn’s task in this election – to win from Opposition at the second attempt, having already lost once – is virtually without precedent.

Clement Attlee led Labour into the poll of 1935, when Stanley Baldwin held on for the Conservatives. In a Mastermind quiz, even that might not ‘count’, however, since he was only officially elected Labour leader some months later. As his famous victory of 1945 followed a world war in which he had served as Deputy Prime Minister in a Government of National Unity, the circumstances can truly be called unique.

Early and Often – A Short History of Fixing Elections

Others seem to have benefited from even a brief tenure in the top job, having been installed as a result of upheavals between elections. Henry Campbell-Bannerman was already Prime Minister when he led the Liberals into their reforming ministry in 1906, despite losing in 1899. And Robert Peel had served as premier for a few months in 1835, going on to lose two elections before his triumph at the ballot box in 1841 as a Conservative.

A potential dividend for Corbyn – glimpsed in the fleeting moment when Parliament might have unseated Boris Johnson via a no-confidence motion – would have been for him to acquire a more authoritative air, even from a short spell in charge.

Which all leaves just one precise precedent. The only election when the exact sequence unfolded, which Corbyn is now trying to emulate, was in 1970.

The odd one out, among the recent Prime Ministers listed above, is Edward Heath, who had led the Tories for just a few months by the time Wilson went back to the people in 1966. He is the only one who, having never been Prime Minister before, won office at the second time of asking as Opposition leader, four years later.

It stands as one of the most enigmatic, not to say downright baffling results of British electoral history. Heath’s spell as leader was marked by intra-party feuding, as he dismissed Enoch Powell from his frontbench after the infamous ‘rivers of blood’ speech. A piano-playing Cowes yachtsman, who had risen from relatively humble origins, Heath was easily lampooned by the energetic satirists of the day.

Harold Wilson’s Labour Government, credited with successful reforms such as the Abortion Act, and equal pay for women, was seen as being in keeping with the times. The Selective Employment tax was a wizard wheeze of Roy Jenkins as Chancellor, to boost manufacturing and help Britain’s balance of payments.

So why did Labour lose? One ill-timed set of duff trade figures; a devaluation of sterling, claimed by Wilson to leave “the pound in your pocket” unaffected; even England’s World Cup defeat by West Germany, four days earlier, were all fingered as possible causes for a sudden loss of confidence.

Perhaps we can bracket Heath with the other three in our list who have come closest to replicating his success: Attlee, Campbell-Bannerman and Peel. The Liberals before World War One and Labour after World War Two, clearly benefited from a widespread sense that a previous order had failed, and it was time for change. Peel had that too, in his own way, along with the gift of divided opponents. And Heath must have latched on to a subterranean shift, perhaps borne of a sense in the country of something not quite being right, which defies meaningful analysis to this day.

Labour in 2019 will need a dose of all three factors if it is to start measuring up to replace the current blue curtains in Number 10. Of course, the task is complicated because everyone now is a candidate of ‘change’ – to be brought about by leaving the EU, or radical reform of the economy and public services.

The extent of division among the Leave vote will depend on any in-roads made by the Brexit Party. Nigel Farage today committed them to “contest every seat”, albeit possibly “with local exceptions”. Victory by someone in Corbyn’s position would not be entirely unprecedented. But it would be extremely rare.