‘Tibet Today is the Tomorrow of Hong Kong’

As increasingly repressive measures are introduced to quash the Hong Kong protests, the shockwaves are being felt in Tibet – the sad history of which may be a vision of what is to come on the island.

On 5 October, Alan, a young professional working in Hong Kong, sat in front of a television in his office and watched as the city’s embattled leader Carrie Lam announced that she would begin using repressive emergency powers to help quell the unrest unfolding there daily.

She claimed that the colonial-era Emergency Regulations Ordinance would come into force at midnight and be used to ban protestors from wearing masks while making no guarantee that she would not later take advantage of the wealth of other sweeping powers she had just granted herself – including the ability to effectively remove all civil rights, whether it be censoring the media, revoking freedom of speech, seizing property or arbitrarily detaining citizens.

“This is the day Hong Kong is officially dead,” Alan said as he packed up his desk and headed for the door. “Please use your best judgement and take the necessary precautions with personal safety as your highest priority,” his boss had written in an email telling his office workers to go home early.

As the clocks turned midnight and the mask ban came into force, the city erupted with violence across all 18 districts. Defiant protestors pulled on masks and took to the streets, setting fires and smashing store fronts associated with Beijing. Graffiti was scrawled across walls declaring “if we burn, you burn with us”.

“The Chinese Communist Party continues to argue that Tibetans are happy, Uyghurs are not subject to any repression and the Hong Kong protestors are the result of some troublemakers”

More than a thousand miles away, where crimson-robed monks and nomads live in one of the most remote regions on earth, the shockwaves of Hong Kong’s chaos are beginning to be felt.

In one north-eastern province of Tibet, citizens using the popular communications app WeChat have been told that Chinese security forces will be screening all posts about Hong Kong. A Chinese state-run website warned that anyone found to be discussing the unrest before it has been reported by news organisations overseen by the Chinese Communist Party (CCP) will face up to eight years in prison. Similar punishments will be handed out to any users sharing information which the CCP deems to be ‘illegal’, including rumours, political information and unverified fundraising.

There are also signs that Tibet could be seeing the last of its citizens’ tourism to Hong Kong, after documents from the state-run Tibet Banma Tourism Culture Communications Company revealed that it would begin barring tourists from travelling to the region from September. This comes less than a month after 10 Hong Kong university students were arrested at Everest base camp for shouting “recovering Hong Kong”.

The new restrictions on those living in Tibet were uncovered by the London-based rights group Free Tibet, along with its research partner Tibet Watch. 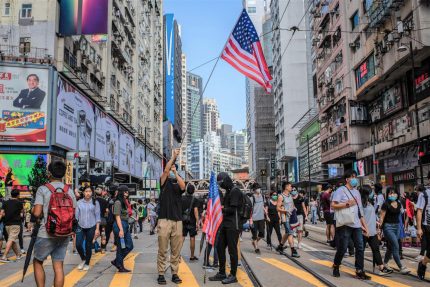 John Jones, Free Tibet’s campaigns and advocacy manager told Byline Times that they are likely to be the result of the support for Hong Kong expressed by Tibetans living in exile in Dharamsala, India, as well as China’s heavily repressed ethnic Uyghur population in Xinjiang.

“We can only speculate why this was introduced,” he said. “One clue could be the impressive displays of solidarity that there have been among Tibetans and people from Hong Kong, as well as Uyghurs. In Dharamsala, Tibetans have held marches showing their support for the protesters in Hong Kong.

“Meanwhile in cities around the world, including London, joint demonstrations have been held between Tibet and Hong Kong supporters. The CCP continues to argue that Tibetans are happy, that Uyghurs are not subject to any repression and that the Hong Kong protestors are the result of some troublemakers. Any kind of united front among these groups would be seen as dangerous to this narrative and could inspire further protests.”

Tibet – or as many Tibetans call it, the Land of Snows – was an independent nation until it was invaded by Chinese forces in 1950. Its population has lived under military rule ever since. Unlike the protests and violent police crackdowns in Hong Kong, there are no television cameras, smartphones or journalists documenting the violent repression its people face on a daily basis. It is, as US Senator Robert Menendez once described, “one of the most repressed and closed societies in the world”.

Hong Kong Protests: ‘The City is Starting to Feel Like a Police State’ 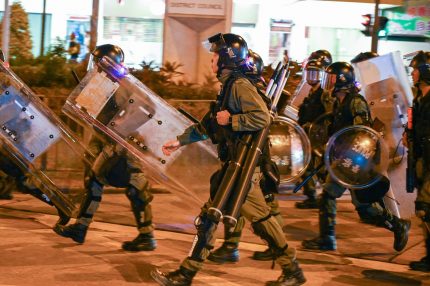 The Chinese Government claims that accusations of oppression in Tibet are a myth and that Tibet becoming part of the People’s Republic of China has been beneficial for its population. In reality, social and ethnic discrimination is rife, with Tibetans receiving few benefits from Chinese development. China freely arrests, imprisons and tortures Tibetan writers, musicians, artists, environmentalists and religious figures for the simple act of posting a blog, writing an essay, or singing songs that express the suffering of the Tibetan people. These prisoners are later tried in secret without independent legal representation and the evidence used against them is extracted by torture.

In 2016, the UK Conservative Party’s human rights commission heard from Yeshe Choesang, editor of the Tibet Post International, who explained that “every aspect of Tibetan life is under siege and Tibetans have even fewer civil and political rights than Chinese people also ruled by the Communist Party… the regime enforces its control over every aspect of life with the threat and use of arbitrary punishments, at times including severe violence”.

As the isolated nation now faces even tighter restrictions over Hong Kong, Hong Kong’s residents fear that Tibet could become the template for their future. One protestor, who did not wish to be named, warned that “Tibet today is the tomorrow of Hong Kong”.

It is a fear that John Jones of Free Tibet says should be taken seriously.

“Anyone who attempts to split any region from China will perish, with their bodies smashed and bones ground to powder”

“Some activists from Hong Kong have expressed concerns that their city could become the next Tibet or Xinjiang,” he told Byline Times. “It is important to take these fears seriously and also to consider that the current crackdown in Tibet was introduced following equally seismic protests in 2008.

“Like in Hong Kong, those protests took the CCP by surprise and spread before the party knew how to respond. After those protests, and the international criticism that China received for its handling of them, the CCP vowed to keep Tibet ‘stable’ at all costs and prevent protests breaking out again, using a combination of tight surveillance, heavy policing, monitoring communications and preventing people and information from leaving Tibet. It is conceivable that variations of these policies could be rolled out in Hong Kong.

“Given Hong Kong’s role as an international financial centre and the billions in foreign direct investment that comes through the city, the CCP might consider imposing different measures on Hong Kong to those that it has inflicted on Tibetans and Uyghurs. However, even if such measures were half as severe, they would still turn Hong Kong into a highly repressive environment and eradicate those civil liberties that its population enjoys under the ‘One Country, Two Systems’ arrangement.

“The UK, and other countries that value democracy and civil liberties, really do owe it to the people of Hong Kong to firmly push back against any such measures.”

As if to hammer home the fears, during a state visit to Nepal on 13 October, Chinese President Xi Jinping gave one of his strongest warnings yet to people living in regions such as Tibet and Hong Kong: “Anyone who attempts to split any region from China will perish, with their bodies smashed and bones ground to powder.”