An American Freelance Journalist on the US ‘Kill List’

CJ Werleman speaks to Bilal Abdul Kareem, a Muslim American citizen, who is a constant target of unexplained extrajudicial murder.

A United States judge has sided with the Trump administration in dismissing the case of American freelance journalist, who has sought confirmation of whether he has been placed on a US “kill list”.

Bilal Abdul Kareem has already survived five drone strikes, two of which were on a car he was travelling in.

In dismissing the case and invoking the privilege of “state secrets” this week, the judge affirmed that the US President has the right to carry out the extra-judicial murder of a US citizen, without providing then with an avenue to discover or challenge the basis for why it is they are being targeted.

The Government argued that disclosing whether or not Abdul Kareem was being targeted could give him an opportunity to evade capture or further US action and risk compromising intelligence-gathering methods and sources. In other words, the US Government is now free to deny its citizens due process and kill them without reason.

Abdul Kareem is currently located in opposition held territory in Syria, where he provides reports from the frontline in what is now an eight-year-long war between Bashar al-Assad’s regime and opposition forces.

“What is clear is the rules don’t apply for everyone,” he told me. “This is the type of stuff that creates an environment that people feel they have to resort to violence because the system won’t give them a fair chance.”

Abdul Kareem, a native of New York City and a former stand-up comic, has produced a voluminous compilation of combat journalism in the roughly half a dozen years he has spent on the ground in Syria, and has provided commentary for major news networks, including CNN.

When I asked him whether he felt he had made his way onto the Government’s “kill list” because US intelligence agencies of his accessibility to designated terrorist groups, and his ability to move freely among them including former al Qaeda affiliate Hay-at Tahrir al-Sham, he said: “I have no idea and never had any idea.”

“My point is this: I have no idea what the US Government saw or didn’t see, but now there is no legal recourse for me,” he added. “No true day in court. No opportunity to show the people the reality.” 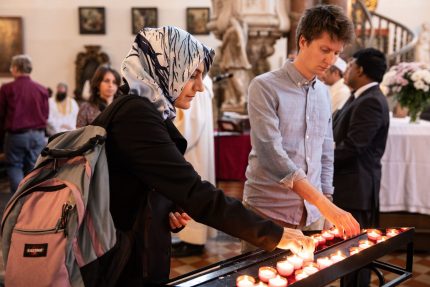 Abdul Kareem refutes the claim made by news outlets friendly to the Assad regime – such as the Iranian state owned Mint Press News – that he is an ‘al-Qaeda propagandist’. I have multiple sources in Syria, most who remain active members of opposition groups, affirm that he does not belong to a militant group.

“I am not, nor have I ever been a member of al-Qaeda,” said Abdul Kareem, a statement he has made to me a number of times over the course of the past few years in private conversations.

“What does the US Government have to fear from me? They fear the truths that we have been revealing about their ‘war on terror’ in Syria”

When asked why he, an American citizen, is able to move freely among these openly anti-American groups, Abdul Kareem, who is Muslim, said it is because he has been able to establish “mutual respect”.

I also asked Abdul Kareem whether he, or the video blog he founded, On The Ground News, had received any compensation from any US designated terrorist group. “I have not received, nor have I solicited a penny from any group whatsoever, whether they be from a designated group, non-designated group, or government,” he told me.

Moazzam Begg, an outreach director with the civil rights group Cage UK who was detaineed in Guantanamo Bay for two years before being released without charge, expressed his befuddlement with the decision.

“I cannot reasonably understand why the US would feel the need to target Bilal Abdul Kareem, but then, reason rarely comes in to it,” he said. “He’s Muslim, he’s black, he’s a journalist and he’s close to the opposition in Syria. In today’s world, that’s enough to seal your fate.”

Begg’s comment speaks to the very heart of the matter: as a Muslim, Abdul Kareem is guilty by association and thus deemed worthy of extermination without explanation. That dozens of white, non-Muslim American citizens have been able to move freely in opposition-held territory, holding interviews with fighters of all ideological affiliations, before returning home safely and without hindrance provides supporting evidence for this claim.

“Any Muslim who came to Syria is considered guilty without even being charged,” said Abdul Kareem, a claim also supported by the fact that bona fide aid workers from Western countries, who happen to be Muslim, have had their citizenship revoked for travelling to Syria, whereas non-Muslim aid workers who have done the same have suffered no such ordeal.

“What does the US Government have to fear from me?” asked Abdul Kareem. “They fear the truths that we have been revealing about their ‘war on terror’ in Syria. They fear that the American people are starting to hear that the drone programme that has killed so many innocent people creates more enemies than the Government could ever fight. They are afraid that people are going to see the reality that not every Islamic fighter is planning an attack on Americans. This is why they want me dead.”

The Murdered and the Martyred: Armenia’s Political And Spiritual Crisis

Tom Mutch, 18 May 2021
Six months after losing the Nagorno-Karabakh war, Armenia is a nation in crisis. With the US recognition of the Genocide, Tom Mutch asks whether they can begin to heal