JUSTICE FOR DAPHNE: "It is an Assassination" – Special Rapporteur Hits Back at Maltese Government's Claims about Murdered Journalist

“There are crooks everywhere you look now. The situation is desperate.”

These are the last words investigative journalist Daphne Caruana Galizia published on her website on 16 October 2017, less than half an hour before she was assassinated by a car bomb outside her home.

Last week, a report into her death, ‘Daphne Caruana Galizia’s Assassination and the Rule of Law in Malta and Beyond: Ensuring that the Whole Truth Emerges’, was published by the Council of Europe following a year-long investigation by Special Rapporteur Pieter Omtzigt.

Its findings are damning.

Recognising that Caruana Galizia was the most influential journalist in Malta who reported on corruption scandals involving officials at the highest levels of Government, the failure of the rule of law in Malta – which she exhaustively reported on for years – ultimately contributed to her assassination.

“Malta’s weaknesses are a source of vulnerability for all of Europe and if Malta cannot or will not correct its weaknesses, European institutions must intervene,” the 24-page document stated.

The report demands that Malta adhere to its human rights obligations under Article 2 of the European Convention on Human Rights – the right to life – effectively and independently investigate suspicious deaths, and set up an independent public inquiry into Caruana Galizia’s death without delay.

It also stated that the EU’s smallest member state is in breach of European standards of law, with Malta’s law enforcement, justice and government institutions all under state capture by the current Prime Minister Joseph Muscat.

Justice for Daphne, justice for her investigations, and the prevention of more murders, can only be achieved if Malta is forced to become a properly functioning democratic state.

“The rule of law in Malta is seriously undermined by the extreme weaknesses of its system of checks and balances” the report warned.

Mr Muscat alone is in charge of almost all institutional appointments within Malta and directly appoints ministers, the chief justice, judges, magistrates, members of the civil service, security services, commissioners of police and police governance. The attorney general is also appointed by him and provides legal advice to the Government – while at the same time prosecuting criminal offences. The attorney general also advises the police, decides on whether cases are brought to trial, and holds the power to dismiss any case or prosecution.

“The Prime Minister’s power to appoint the most senior civil servants, combined with over-extensive and abusive recourse to appointment of ‘persons of trust’, seriously undermines the independence,” the report said.

“In a well-functioning democracy, governed by the rule of law, the civil service should be politically impartial, and the Maltese civil service overall falls short of these requirements.”

Byline Times has approached the Maltese Government for comment over many weeks about the lack of a murder investigation into Caruana Galizia’s assassination.

It has received no reply – apart from one statement from the head of communications for the Maltese government who told this newspaper: “I’m afraid you are not being informed correctly, particularly on the current police investigations following leads to the masterminds of the Caruana Galizia murder. ‘Assassination’ is a very politically loaded word, which I refute.”

Byline Times put this statement to Special Rapporteur Pieter Omtzigt, who said: “I know of nobody who has an alternative explanation for this being an assassination. It was not an accident, it was a car bomb. Car bombs… are not placed by mistake, and we still have not seen anybody put on trial for placing the bombs.

“We have basically no clue who ordered or masterminded it. But, it is an assassination, and I find it quite worrying that even that is being disputed. I am looking forward to hearing from the Maltese Government. First, a reply to my report and, secondly, an explanation of how this cannot be an assassination.

“The Maltese Government did not put forward an amendment to change the title of the report. You can actually amend the title or try to, and ‘assassination’ is in the title.”

Malta’s Government objected to the report being issued. A brief press release said it had been “rushed” and was “full of inaccuracies.”

Mr Omtzigt told Byline Times that he is “still waiting for a list” of these so-called inaccuracies from the Government.

“Since they are unable to produce that list, I take that for them to say that the report is fairly accurate,” he added.

Suspects Could Walk Free in Months

Daphne Caruana Galizia’s work focused on corruption amongst Maltese politicians and public officials and the report noted a “continual failure of the Maltese authorities to bring the suspected killers to trial or identify those who ordered her assassination”.

It said that Maltese law enforcement bodies must “end the prevailing climate of impunity by robustly investigating and prosecuting those suspected of being involved in or benefitting from the scandals exposed by Daphne Caruana Galizia”.

The report confirmed the grim reality that, 17 months after the arrest of the three men who allegedly executed her, no trial is forthcoming.

This means that, in less than two months – due to delays by magistrates – the three accused will walk free, due to the custody time limit which expires 20 months after a suspect has been charged.

The report criticises “the failure of the police to interrogate current Economy Minister Chris Cardona, despite claims that he had contact with the suspects”. This is due to his alleged attendance at one of the suspects’ bachelor parties, and the fact that he was reported to be seen on a number of occasions talking to two of the alleged hitmen in a Maltese bar, before and after the murder.

But, Cardona has yet to be questioned about this and he is one of only two ministers who refused to meet or reply in writing to Mr Omtzigt.

“The police also failed to respond to repeated requests by Caruana Galizia’s family for information and protection,” the report stated.

The report found that, since Joesph Muscat came to power in 2013, the rule of law in Malta has been undermined by the greater powers he has essentially given himself.

“The office of the Prime Minister has taken over responsibility for various areas of activity that present particular risks of money laundering” it said “including online gaming, investment migration/golden passports and the regulation of financial services, including cryptocurrencies.”

“Fundamental weaknesses” in the rule of law have “allowed numerous major scandals to arise and go unchecked in Malta in recent years,” it added.

The murder of Caruana Galizia is listed in the report as an example, alongside the Panama Papers, the electrogas scandal, the Pilatus bank affair, the egrant scandal, the Hillman affair, and the ‘golden passports for cash’ scheme.

“There is compelling evidence that Mr Schembri and Dr Mizzi in particular are involved in several serious cases of abuse of office, corruption and money laundering,” it said. “They have refused to take political responsibility by resigning and continue to benefit from the protection of Prime Minister Muscat.”

Dr Mizzi and Mr Schembri are both under investigation in an ongoing criminal inquiry in Malta due to their ownership of Panama accounts.

The report noted that “in countries including Spain, Iceland and Mongolia, politicians resigned when their names appeared in the Panama Papers. In Malta, they enjoy the protection of the Prime Minister.”

It is an assassination, and I find it quite worrying that even that is being disputed.

Corinne Vella told Byline Times that the report is a “step closer” towards justice for her late sister.

“Justice for Daphne, justice for her investigations, and the prevention of more murders, can only be achieved if Malta is forced to become a properly functioning democratic state. The approval of [the report] brings us one step closer to achieving those aims,” she said.

The report is expected to be adopted and endorsed once again by the European Parliamentary Assembly this month.

Emboldened Opposition and a Galvanised Movement: What the End of Roe v Wade Means for Abortion Around the World

Sian Norris, 29 June 2022
The overturning of the seminal 1973 ruling by the US Supreme Court has been met with a mixed reaction by pro-abortion activists globally, reports Sian Norris 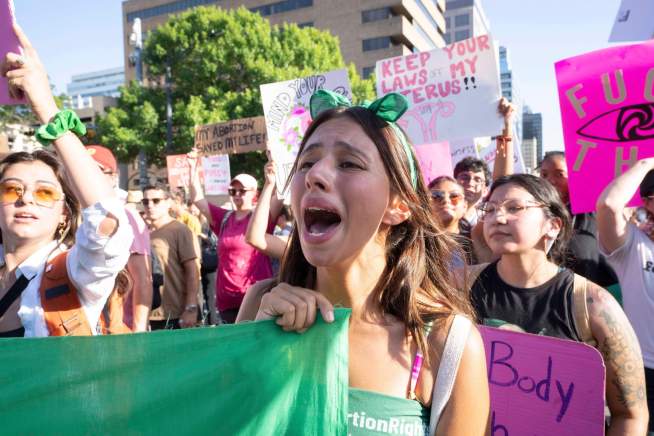