Thousands gathered in Parliament Square on 1st May to demand that the government declare a climate emergency. There was a distinct feeling that the climate debate has moved forward since Extinction Rebellion took over parts of central London in mid-April.

Yesterday’s demonstration featured a broader coalition of activists, with representatives from political parties, trade unions and several prominent climate NGOs. A number of grassroots groups were also present, such as Reclaim the Power, The Student Climate Network and the Kurdish Freedom Movement.

Calls to acknowledge and foreground the work done by climate activists in the Global South featured prominently in the speeches.

“We stand on the shoulders of giants, we stand on the communities around the world who have been defending nature,” said Extinction Rebellion’s Farhana Yamin.

This message was echoed by many of rally’s speakers. Asad Rehman, of the anti-poverty NGO, War on Want, emphasised the disproportionate effects of climate change: “The Global South has been facing extinction for a Long Time,” he said. “When people tell us to not be so radical and to work within the system, we have to remind them they are not the ones dying from this system.”

He added: “The UK is the fifth richest country in the world has been built on the bodies of those in the global south”

MPs have now voted to declare a climate emergency, which will be seen as a significant victory for climate activists. As the rally’s chair, Ash Sarkar put it to the crowd, “You’ve forced the single biggest issue facing our species on to the agenda. The time for tinkering around the edges is over.”

The declaration of a climate emergency does not give the climate activists reason for pause, however, a point that many speakers were keen to make.

“We’re not here to say, ‘thanks for listening’ we’re here to hold them to account. We will keep pushing for more,” Anna Taylor, co-founder of UK Student Climate Network said.

“Merely declaring the emergency indicates that we understand what emergency is,” echoed Jeremy Corbyn, who came to Parliament Square straight from the debate in Parliament. “Now it’s about what we do next.” 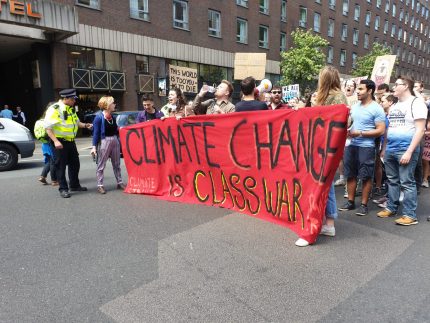